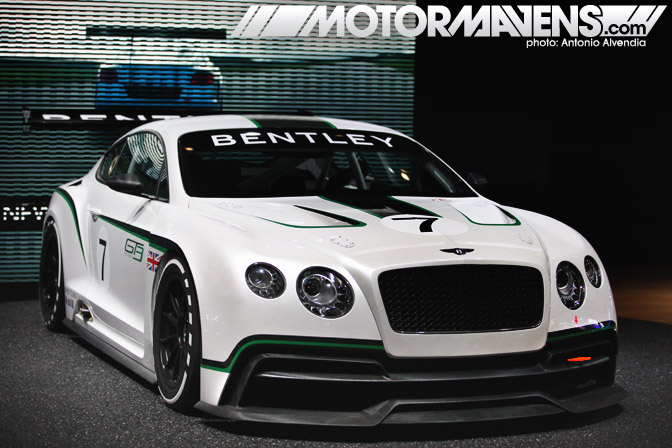 Signaling Bentley’s return to the racetrack for the first time since its historic sixth Le Mans victory in 2003, Continental GT3 remains faithful to the company’s founding motorsport philosophy of developing racing cars from their road-going counterparts. 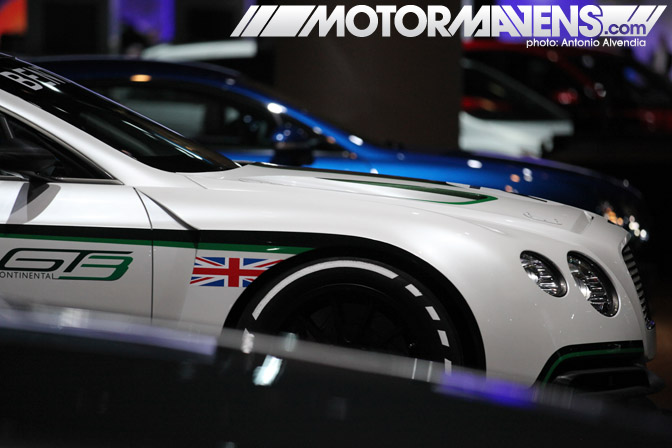 When you walk into the LA Convention Center’s South Hall and turn right (towards the massive Toyota booth), I’m pretty sure that you won’t miss the aggressive stance and classy race livery of the Continental GT3. 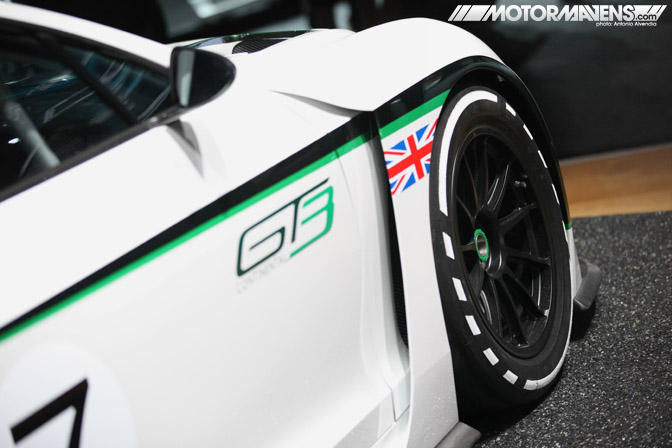 Look at the massive vented fender arches and the center lock front wheel!

Dr Wolfgang Schreiber, Bentley’s Chairman and Chief Executive, comments: “The clear message from our customers is that Bentley belongs on the racetrack, and the Continental GT3 is the realization of a dream we’ve had ever since the launch of the Continental GT. The new GT Speed is the perfect car for us to develop into a racer, and our work so far has shown huge potential.

The Continental GT3 is set to show the world what the Continental GT is capable of in its most extreme form, and establishes a solid foundation for Bentley’s long-term motorsport plans.” 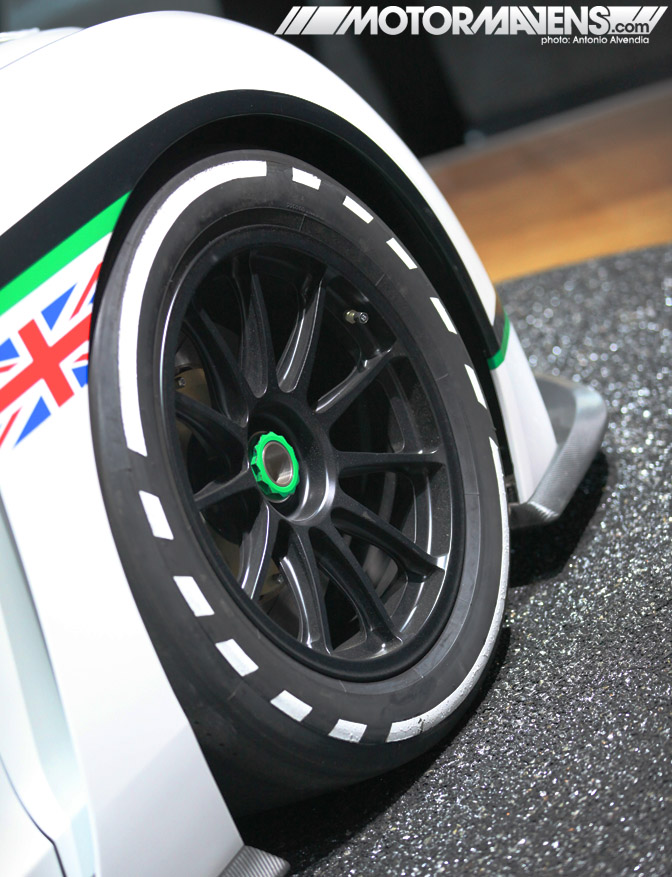 They painted some sort of directional graphic design on the tire; possibly it’s to suggest motion while the car is sitting on the display. Or perhaps the whitewall design was painted more for corporate reasons, to indicate that they are not yet working with one particular tire maker? 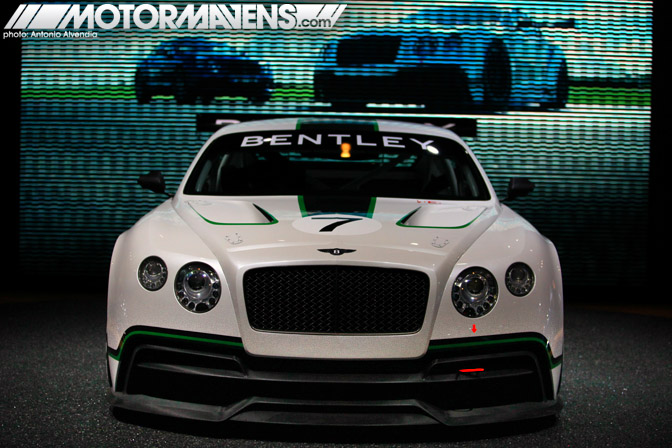 The Continental GT3 is based on the new Continental GT Speed – a refined, luxury grand tourer but which, if the driver demands, has a distinctly hard-edged sporting character. With exceptional levels of instantly accessible performance, the GT Speed, the fastest road-going Bentley ever, is a supercar that can be used every day, whatever the weather and road conditions.

The Continental GT3 concept capitalizes on the prodigious performance, outstanding high-speed stability and renowned durability of Bentley’s iconic coupe, while tailoring its specification for the track with the adoption of a rear-wheel drive chassis in accordance with the regulations, state-of-the-art motorsport hardware and a comprehensive aerodynamic package. 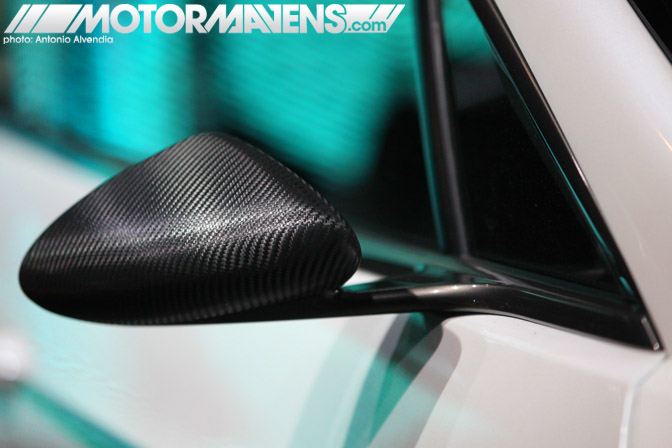 The carbon fiber aero racing mirrors and dramatic livery of the car enhances the muscular, sculpted form of the Continental GT Speed while remaining proudly patriotic with the inclusion of British Union Jack flags. 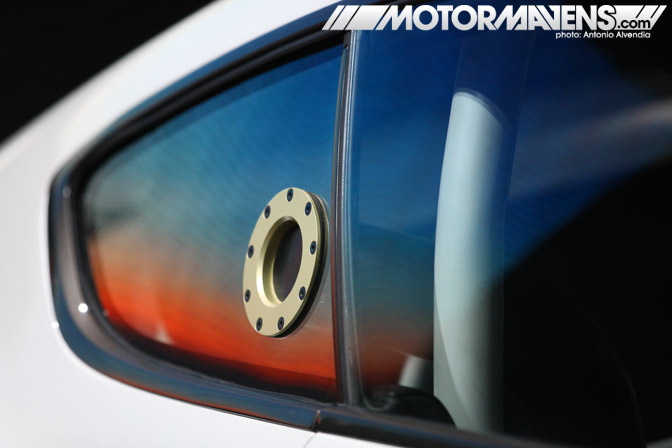 Check out the fuel filler neck built in to the window! With the Continental GT3 concept receiving the full support of the FIA, Bentley is returning to the motorsport arena towards the end of 2013 with a GT race car capable of competing with the very best, in the true Bentley tradition. 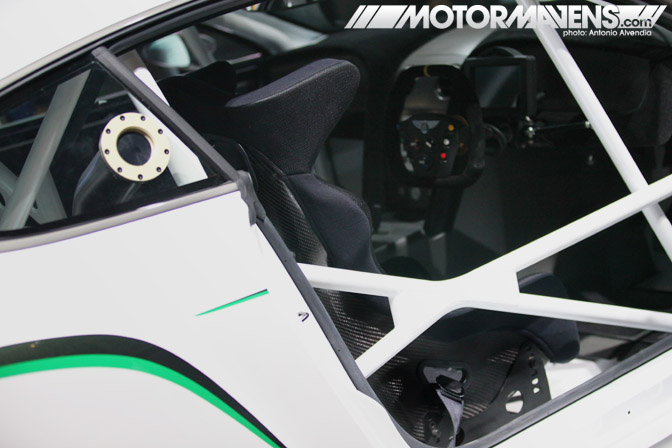 When I asked the Bentley-representative-that-looked-like-a-promotional-model-but-apparently-wasn’t-one if she could smile next to the car so I could take a photo for our story, she smiled and politely said “No, I’m sorry.” Okay, no problem. I can respect that. (I’m not used to hearing that response from automotive–representatives-that-look-like-promotional-models-but-apparently-are-not.)

Then I asked her if she could please open the car door so I could take an interior photo. Again, she smiled and politely said “No, I’m sorry. I can’t open the door… I feel like all I’m telling you is no!” (Well, she could have changed that pattern by saying yes?) Again, I’m respectful of automakers and their wishes when they’re displaying their trophy cars at large autoshows like this one.

However, when some random media guy walked up and just opened the door without asking Bentley’s permission, you can be sure I rushed over to snap a few photos myself! I didn’t have enough time to swap to an appropriate wide angle lens, but here’s a photo of the rollcage and seat. 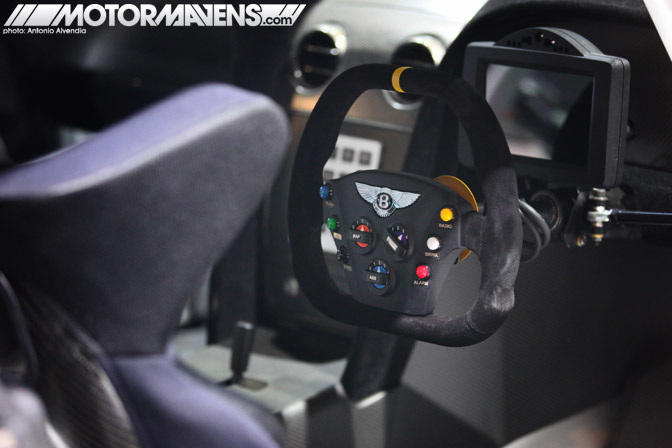 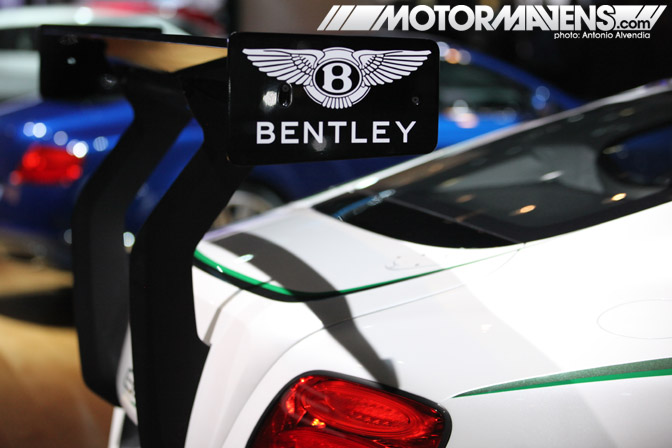 Oh, let’s not forget the massive rear wing, with Bentley logos on the end plates. 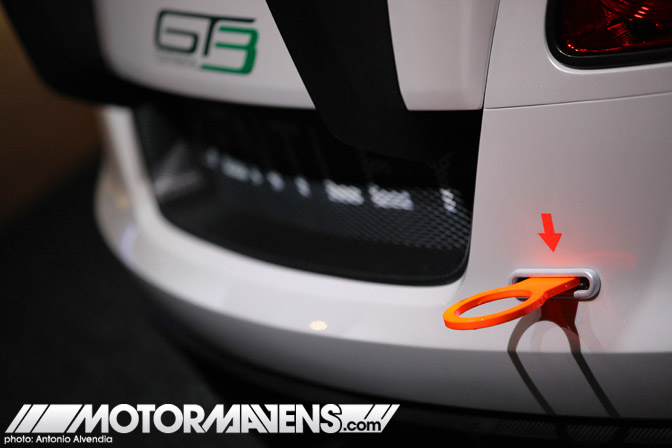 It seems as if the humongous rear is functionally mounted all the way to the frame, routing into the rear bodywork. A bright red-orange towhook is also hard to miss, poking out of the rear bumper. 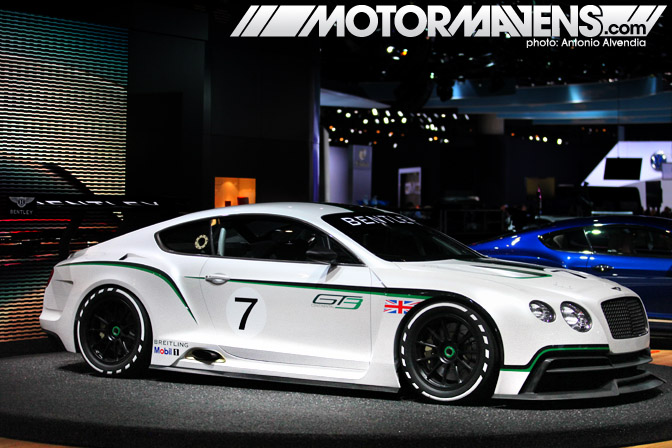 Equipped for endurance as well as outright speed, the new Bentley Continental GT3 competition car will be eligible to race in a range of race series and events, up to and including 24-hour marathons. 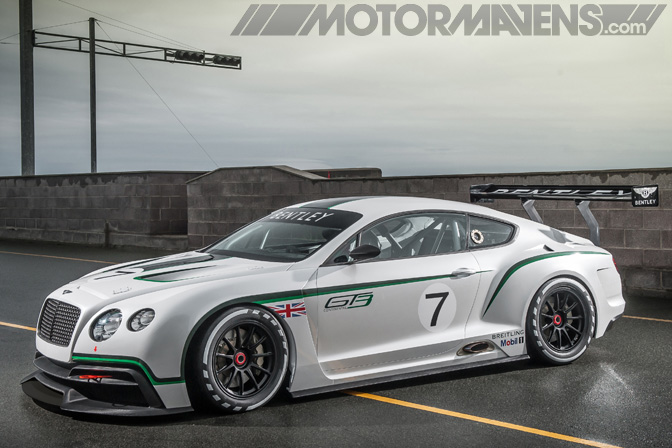 Heading the development of the Continental GT3 is Bentley’s Director of Chassis, Powertrain and Motorsport, Brian Gush. Having led the program that famously saw a brace of Bentley Speed 8 prototype racers take a dominant and dramatic one/two finish at the 24 Hours of Le Mans in 2003, Brian is well placed to lead Bentley’s return to competitive racing. 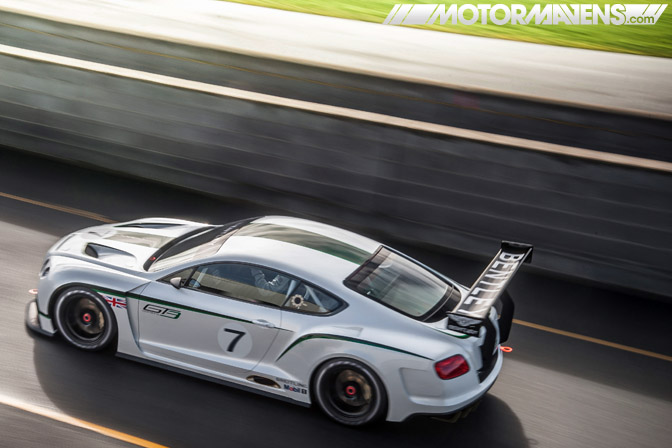 Development of the Continental GT3 will continue over the coming months in the build-up to the start of a test program in 2013. 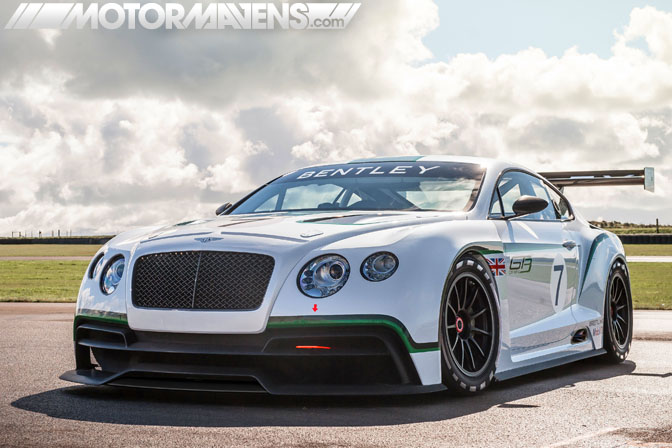 More information and details about Bentley’s return to motorsport will be released in the near future… but for now, you can visit the car and take photos at the LA Auto Show!

You can also watch this video footage of the car doing laps on the racetrack! I can’t wait to see more of this incredible looking car!