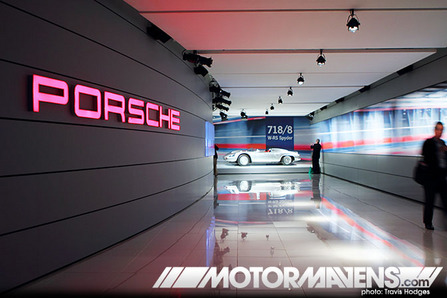 After attending several unveilings at the LA Auto Show, I wanted to grab a prime spot for the world premiere of the 2011 Porsche Boxster Spyder. I hiked across the LA Convention Center to the Porsche hall. The atmosphere, as you can see from the above picture, was going to be very different from the “bull pen” vibe of the other automotive showings. Porsche had a gallery all to themselves. As I approached their hall, I was digging their entrance. Going for the full dramatic effect, the 718/8 W-RS Spyder was on display at end of the hall/main room entrance to show off Porsche’s race and design history – as well as highlighting the evolutionary pathway which led to the inspiration behind the design of their newest model Boxster. 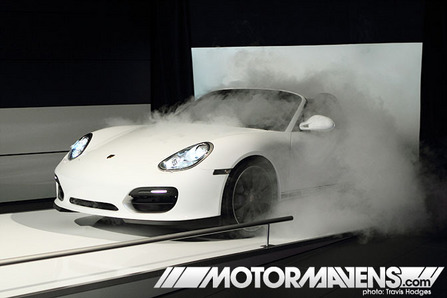 Keeping up their showmanship, Porsche produced the most dramatic unveiling I had seen that entire day.

The beast emerges out of the blackness – through thick, mysterious fog. Slowly creeping from it’s unholy den of iniquity… Come on, you have to bow to the “tongue-in-cheek” spirit in which these “unveilings” are produced.  Still, it was pretty dramatic. haha. 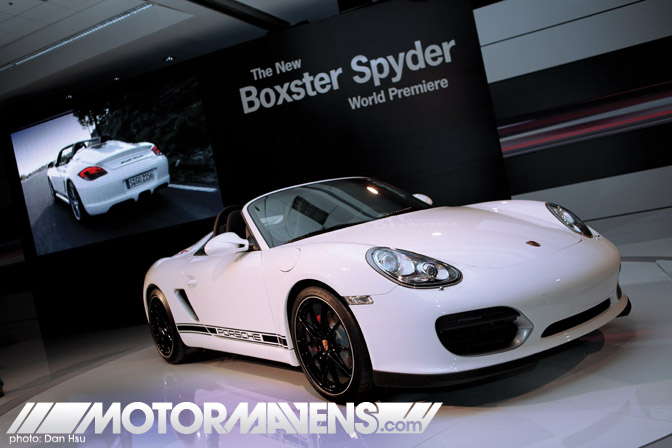 At first glance, the Spyder looks very familiar. Although it is “all Porsche,” there are some outstanding changes. Under the hood of this Boxster Spyder, the lightest car in Porsche’s current lineup (at 2,811 lbs) is a 3.4L, six-cylinder, 320 bhp engine with Direct Fuel Injection fitted just forward of the rear axle. That’s 10 horsies more than the Boxster S.  Standard acceleration from 0-60 is in the 5.1 second region. With the sport package (and using their Launch Control system),  it makes the same 0-60 run in 4.8 seconds. Depending on which package you choose, Porsche also offers all of this while still maintaining a lean and green 30.4 mpg. Sweet! The top speed is 166 mph. Better have the top fully down, though. In line with keeping things light, the canopy only weighs 11 lbs, so if you’re not careful, you might end up having to pick it up off the highway on your way back. 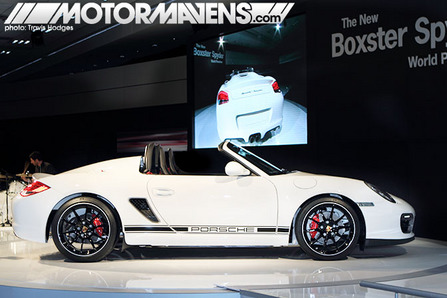 Pulling inspiration from the 1950s and 1960s, Porsche made open air driving it’s main focus. To achieve this, they kept the Spyder model low, light and agile. I love the profile of this Boxster. With those sick domes on the back it gives the car more of a vintage Carrera look and feel. Personally, I immediately picked up on the 50’s and 60’s references – one of my fave periods for Porsche. I could imagine driving this in the South of France on my way to Monte Carlo for the Grand Pix. Man, that would be soooooo sick!!! 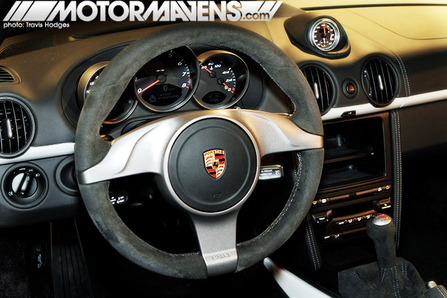 From the looks and presentation, this really is a driver’s car. You might notice from the above picture that the car does not include a radio nor A/C. These are optional, not standard. At first I was like – WTF! But then, I got it . This car is not meant to just take you to a destination, it IS the destination. This is the car you use to drive Southern California’s Pacific Coast Highway in the morning to have a late Lunch in San Diego, then turn around again. It’s meant to make motorcyclists jealous, because they are required by law to wear a helmet. You are encompassed by the beautiful sounds of a finely tuned engine and the wind in your hair and why waste that listening to some lame ass DJ on the radio and A/C you don’t really need at those speeds? Of course, if you just want a car to show off in, get the radio and A/C so you can cruise up and down in Beverly Hills or Hollywood. 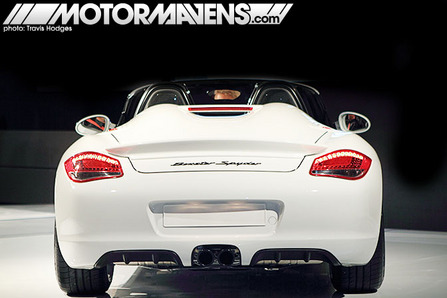 Again these two domes in the back really set it apart from the other Boxsters. The back profile is so killer and, I have to say, this car looks really epic to drive. Maybe I’ll be lucky enough to get that chance some day – I’ll “pull an Antonio” and use a pocket point&shoot camera to get video footage of myself fumbling with the dashboard, LOL! Hey, anyone willing to donate to the “Buy Travis a Porsche Fund” is always welcome. One free ride to all contributors! OK…two free rides…but at times of my choosing…