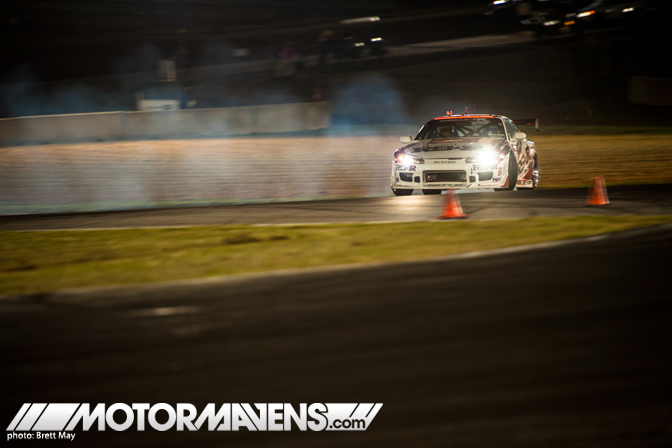 Formula Drift at Road Atlanta for 2012 brought a few new changes to the course this year. First and foremost, the layout of the track has been changed in the famed Turn 10 Complex. Instead of going through the “horseshoe” in a counterclockwise direction, it now is reversed. At first glance, one might think that this configuration is awkward, as the straightaway leading uphill (quite steep, mind you) to the horseshoe is rather long in relation to the tight corners of Turn 10a and 10b. However, the drivers have managed to adapt pretty well by adjusting their strategy for taking the course. Since drivers must keep momentum and speed to climb the hill, this layout change prohibits the extreme entries that we are used to seeing from previous years. 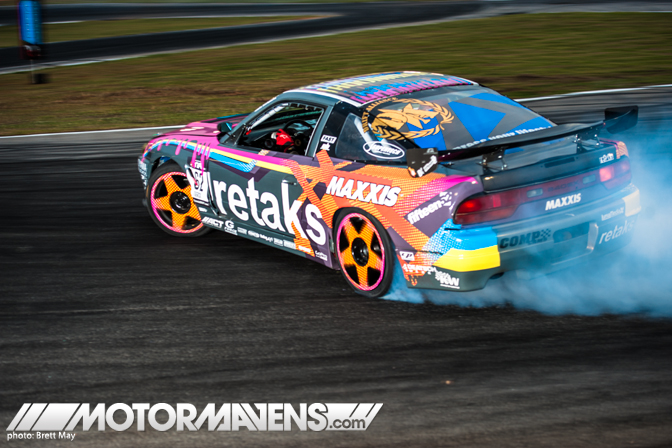 Another addition to the new layout, a more subtle change would be the inclusion of proximity sensors near clipping points. When a driver gets within a certain distance of these sensors, they will flash red so that the judges know for sure that the cars are where they should be on the track – leaving less to the imagination. Here, Ryan Tuerck’s brightly colored Retaks S13 rounds the horseshoe by the light of one of our sharpshooters, Brett May. Antonio and I have some creative disagreements on the livery of this car; I, for one, really like it. What do you guys think? 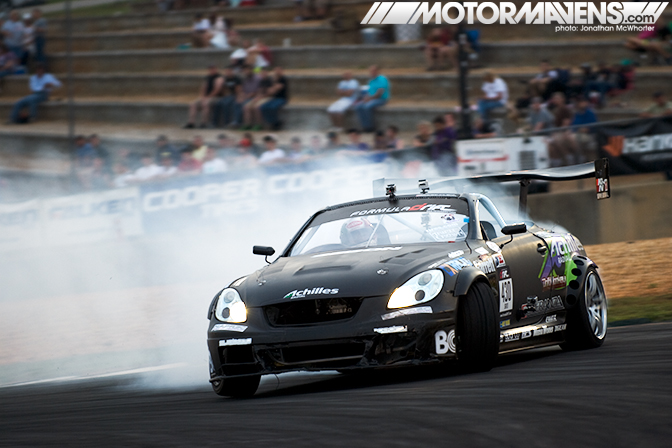 The change in layout now presents a new challenge towards cars with lower power.  Linking the exit of 10b with the entry to the horseshoe was a heck of a feat for some, a cake walk for others. Daigo Saito flexed his 1200hp muscle by sometimes overshooting his mark to enter the top of the ‘shoe, taking some cones with him at times. 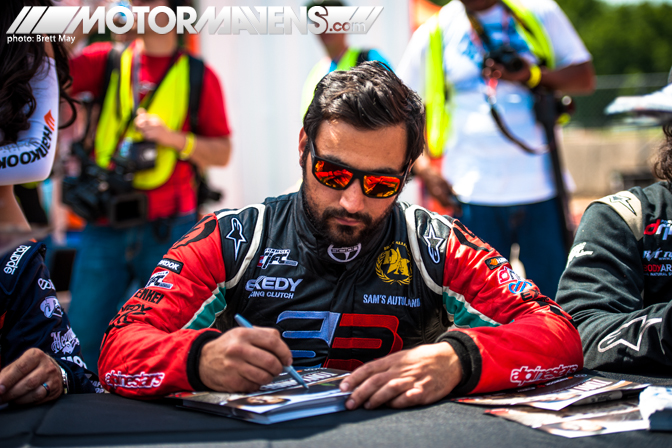 Another brightly colored car out on track to pair with Tuerck’s is that of former Formula Drift judge, Tony Angelo. Driving Ken Gushi’s old Scion tC, it’s clear that drifting is just like riding a bike – it never leaves you. 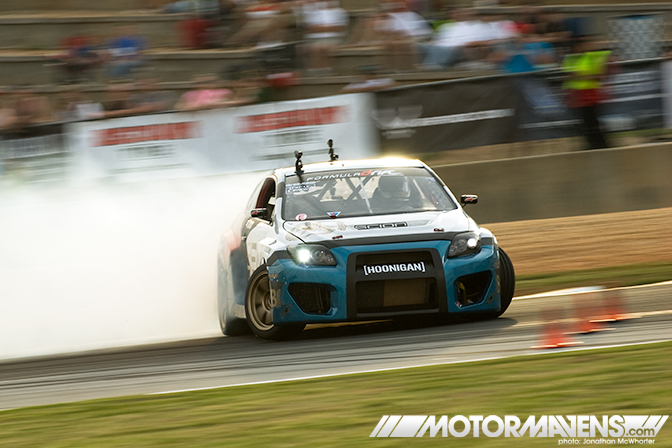 Going up the hill, the drivers are really pushing hard to hang the car out all the way up to the top of the horseshoe. At the right time of day, the sun sets behind the cars creating incredibly scenic backlighting. When I first heard of the layout change, I wasn’t sure how I would like it.  It’s shaping up to be even more fun to shoot than before. 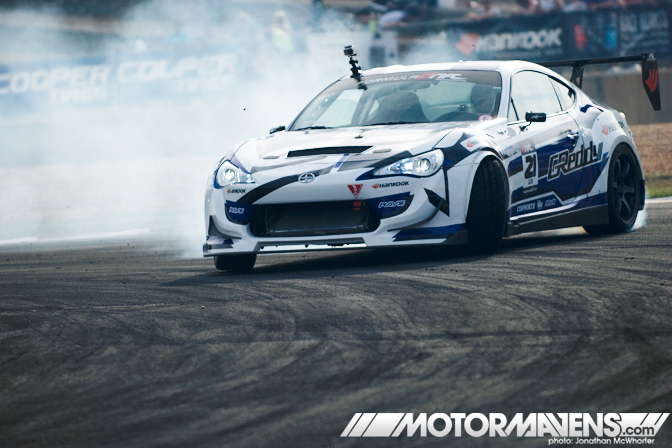 If a new course wasn’t enough for you, I’ll sweeten the pot and throw a new car your way. Ken Gushi’s Scion FR-S is one of the more fun cars to watch, in my opinion.  A small car plus big power is never a bad combination. Not to mention that the sound the boxer engine makes is the soundtrack that dreams are made of – even though some might say they sound broken! 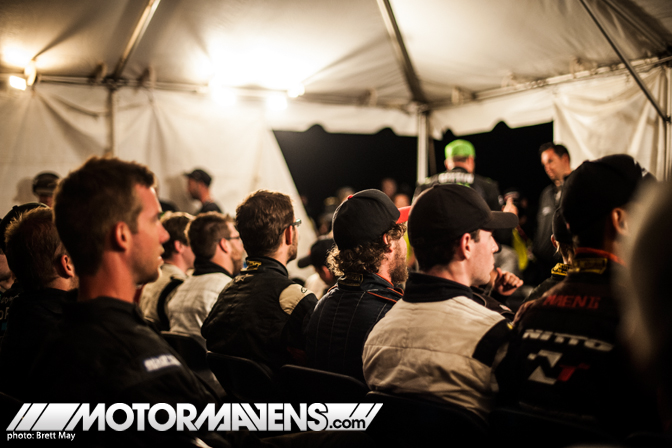 As is customary with Formula D judging, the speed element is taken into account through the use of speed guns placed in a specific zone throughout the course.  Should the drivers meet a prescribed velocity, they are awarded points. However, at some point during the day, there were technical difficulties with the speed gun that were noticed when driver after driver was falling short of the required speed to obtain points. 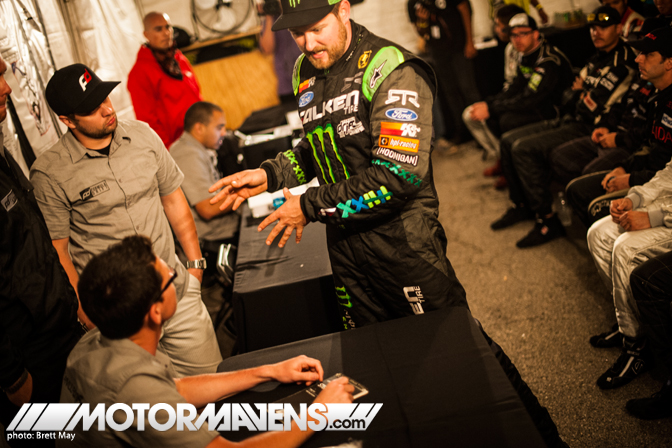 With no way to subjectively and retroactively award or deduct points for something that is 100% objective, the powers that be decided to nix the speed requirement (10 of a possible 100 points – bringing the ‘perfect’ total to 90) and put everyone back on a level playing field. Lots of discussion amongst officials and drivers was had, as 10 points could make a big difference in terms of qualifying position. 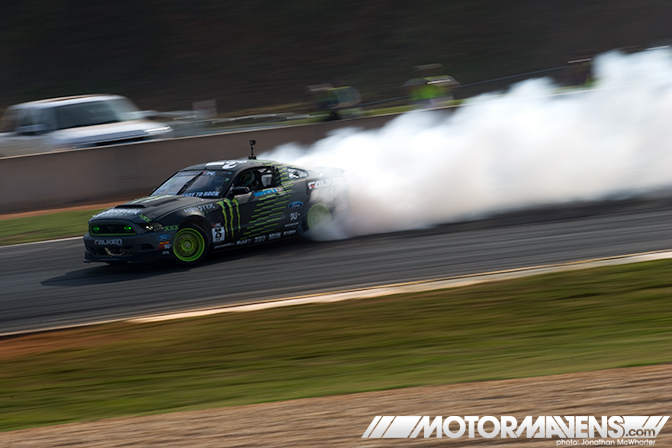 Today all speed issues have been resolved, leaving no doubt that we will have some smokey battles for sure. Stay tuned for more from MotorMavens at Road Atlanta!