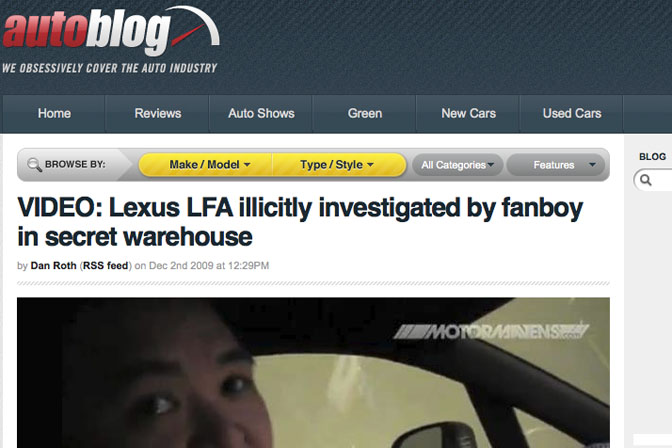 I was just at the LA Auto Show earlier today, when an older gentleman walked up to me and said, “Hey… are you the guy from that Lexus LFA video online?” Totally puzzled, I replied, “Uhh… yeah..?” Then I began receiving some text messages from people saying, “Hey man… your MotorMavens LFA video is on Autoblog right now!” Oh yeah? Coooool.

As I was walking through the Lexus booth, I got a few “evil eyes” from certain corporate folks too… and as much as I tried to play it off with a “Who, me? What did I do?” look on my face, I think maybe they might have seen the video too. I guess a lot of normal car people spend a whole lot of time on Autoblog.

I’m glad that someone tipped them off about our video though, even though they don’t believe it’s legit! I don’t care, at least people are talking about our video, even if they (some of the readers, and even Autoblog’s own contributing writer Dan Roth) are criticizing the video for looking fake, and even criticizing me personally for looking like a Lexus fanboy or having, as Dan Roth puts it, “meaty, indiscriminate paws.” Hahaha, it’s cool, I don’t care… unlike many other automotive writers, I don’t feel the need to take myself so seriously.

And so what if I do sound like an unprofessional, Lexus fanboy in the video. That’s just how the Lexus LFA makes me feel; it makes me feel awe and inspiration like I was a little kid again. (Well, let’s be honest. I dunno if I was ever a little kid.) And if I was still a kid, I’d be tearing the poster of the Lamborghini Countach off my wall and replacing it with the limited edition screenprint of the Lexus LFA that I got at SEMA. Yes, I like the LFA that much.

On the Autoblog post/comments, I was criticized for sounding totally unprofessional and being way too excited like a fanboy, sure… but I don’t feel like I need to use Business English when I’m creating content for our site; so excuuuse me for being enthusiastic, because quite simply… the Lexus LFA genuinely excites the sh!t out of me.

If other automotive writers are afraid to show their real emotions or lack that type of enthusiasm when dealing with incredible cars like the LFA, then that sucks for them… they should get out of the game. After all, isn’t genuine enthusiasm for cars what makes us all tick?

So call me a fat ass fanboy if you will… but this fat ass fanboy got to drive the LFA before most of the USA did, even though it was just in a circle, inside a warehouse. Good enough for me, for now.

Either way, now a whole lot more people have heard of the MotorMavens website. Win.

Antonio Alvendia, Autoblog, Lexus, LF-A, LFA
You may also like