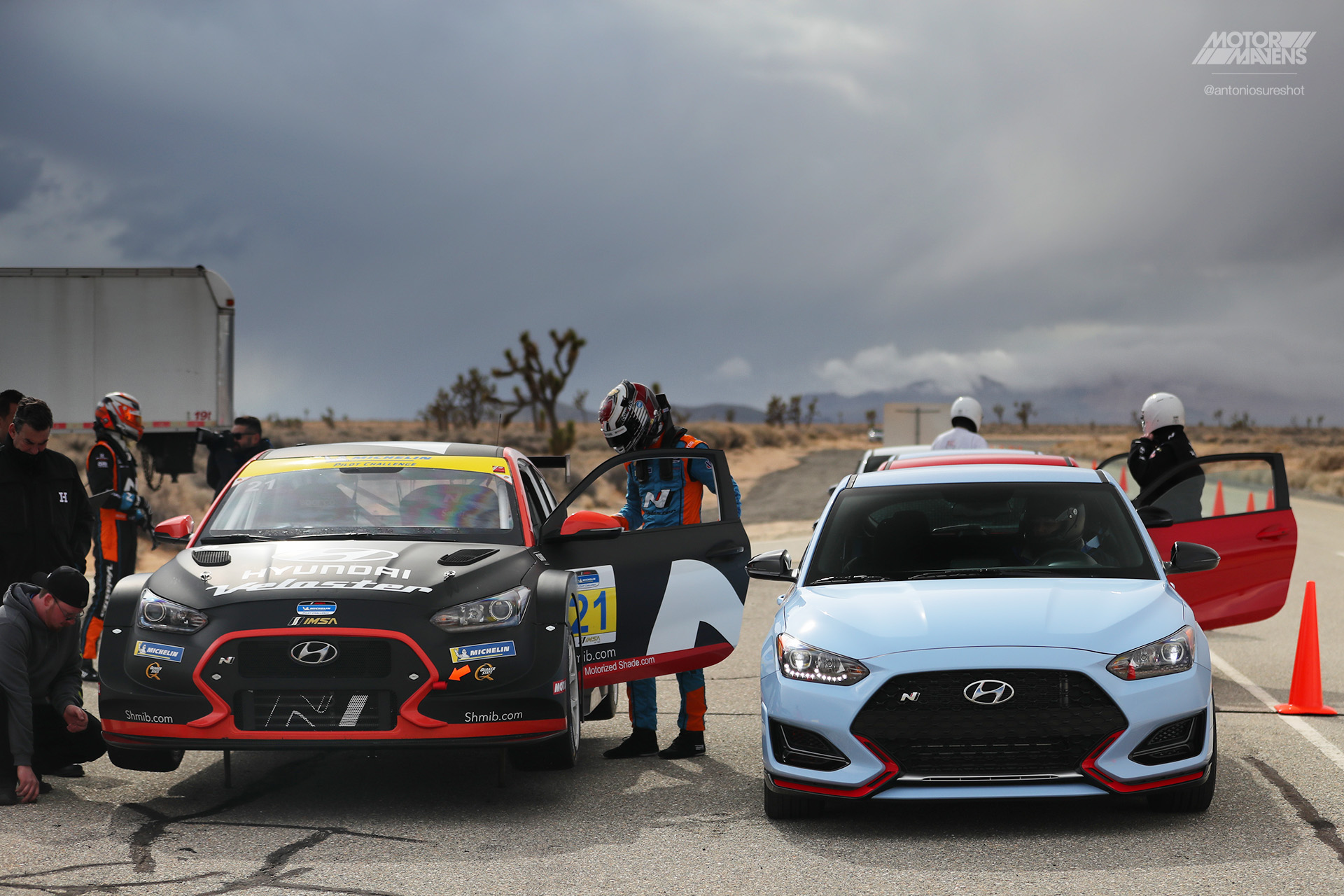 I was recently invited by Hyundai to be part of a program that allowed automotive writers to experience their all new Veloster N and Elantra GT N Line on their private test track deep in the Southern California desert.

While I know the Elantra GT N Line has been very actively campaigned at motorsport events like the Nurburgring 24 or Pirelli World Challenge‘s TCR class, I had never been given the opportunity to get behind the wheel of one of these cars until this event, so I was excited! 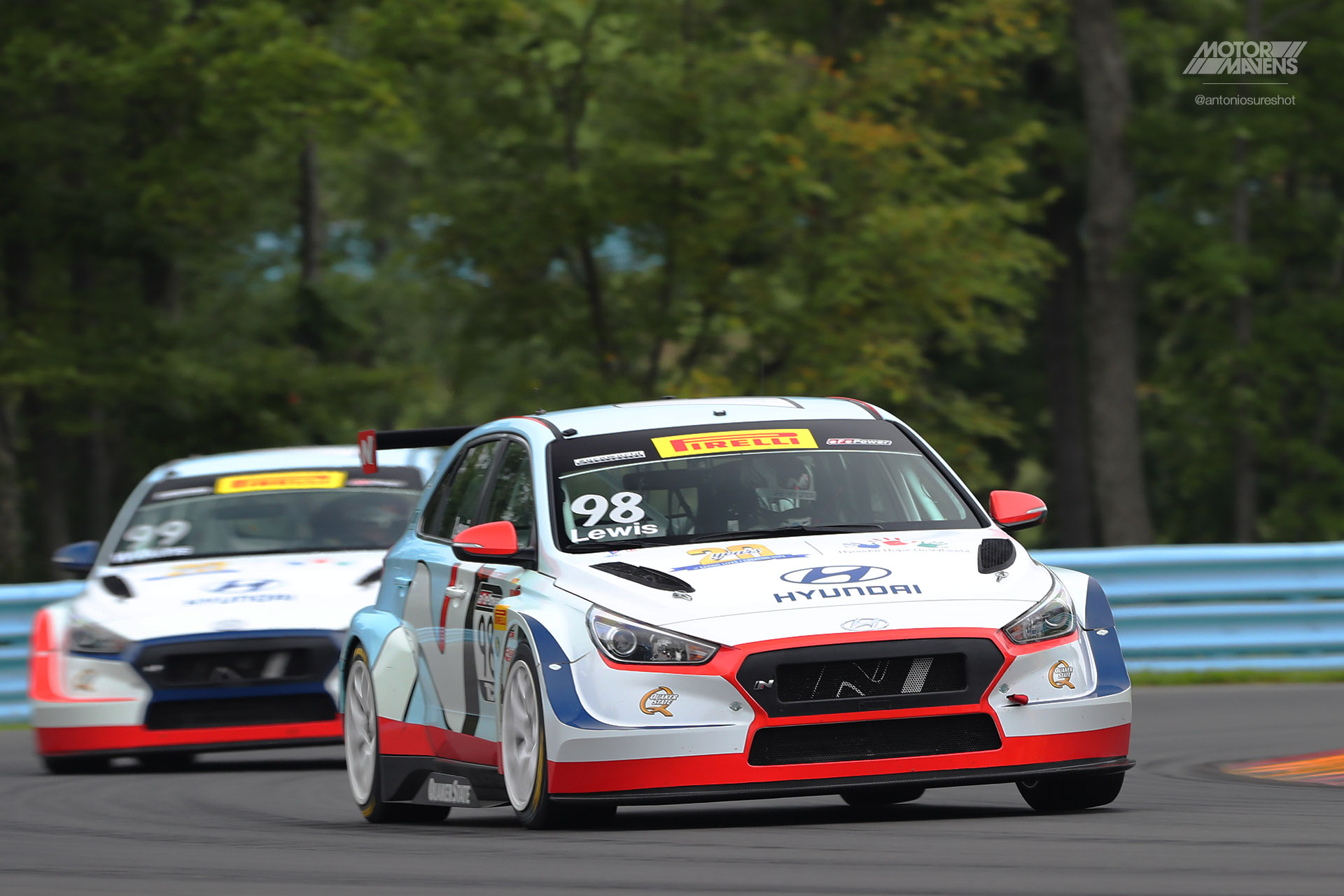 I shot the photo above at the Pirelli World Challenge race at Watkins Glen. I watched these five door i30N (sold in the United States as Elantra GT N) TCR class hot hatches dominating most of the other cars on track every time they went out!

In fact, as an added highlight of the event, Hyundai had their pro drivers Marc Lewis and Mason Filippi on hand to set fast lap times and show the journalists and influencers what these cars were capable of. While most of the journalists kept challenging the clock to get close to the lap times of the pro drivers, I asked Mason to ride along with me in the car to coach me on going faster. Sure enough, he helped me drop my lap times A LOT. 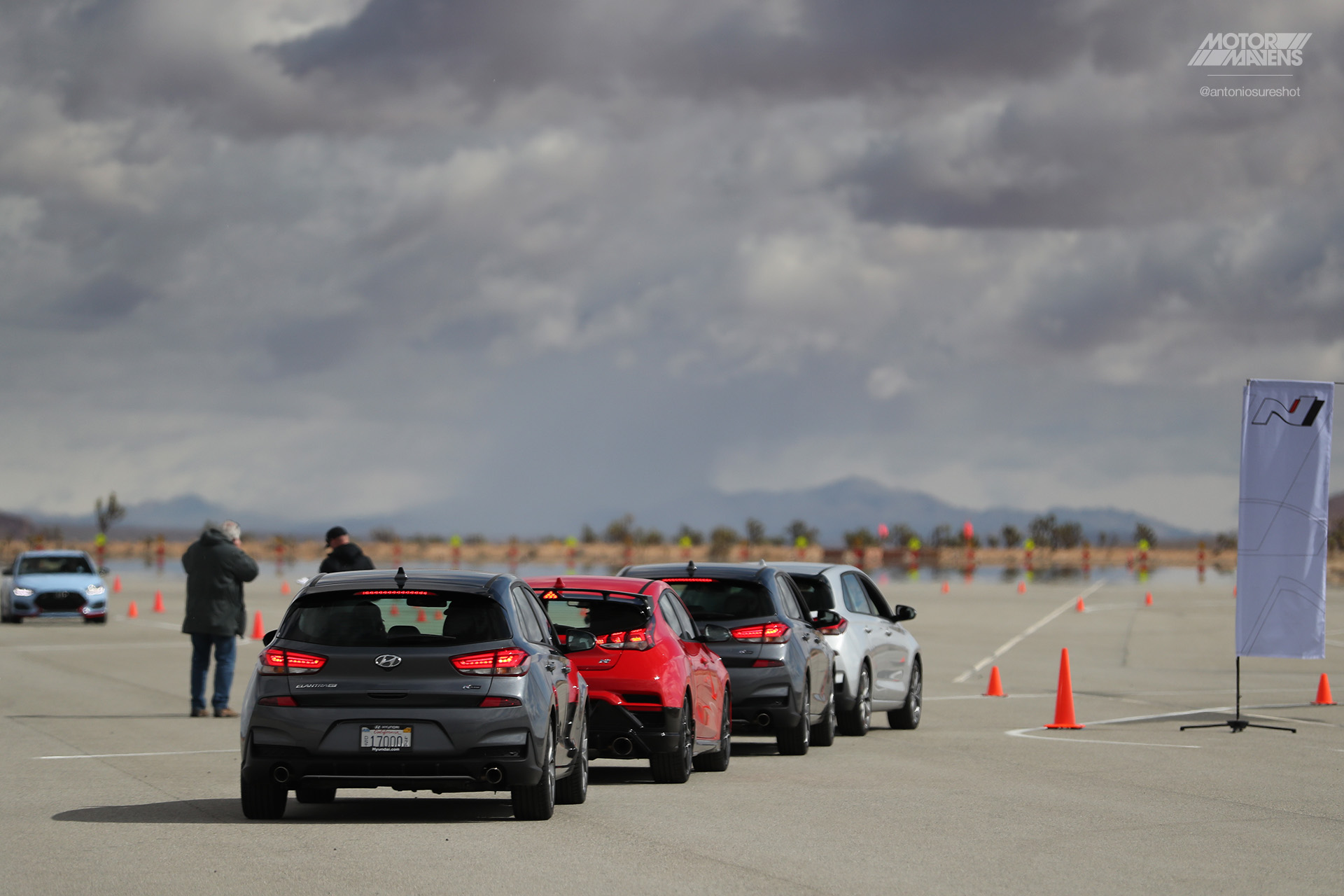 After a quick initial briefing where we learned about the cars, we jumped in the cars and lined up on grid.

I tried out the Elantra GT N Line first, which is the first N Line model from Hyundai that will be sold in the United States. N Line trims add sporty design elements and refined powertrain/chassis upgrades to existing Hyundai products. N Line is part of Hyundai’s ‘N’ product portfolio that includes the carmaker’s growing ultimate ‘N’ range of vehicles. 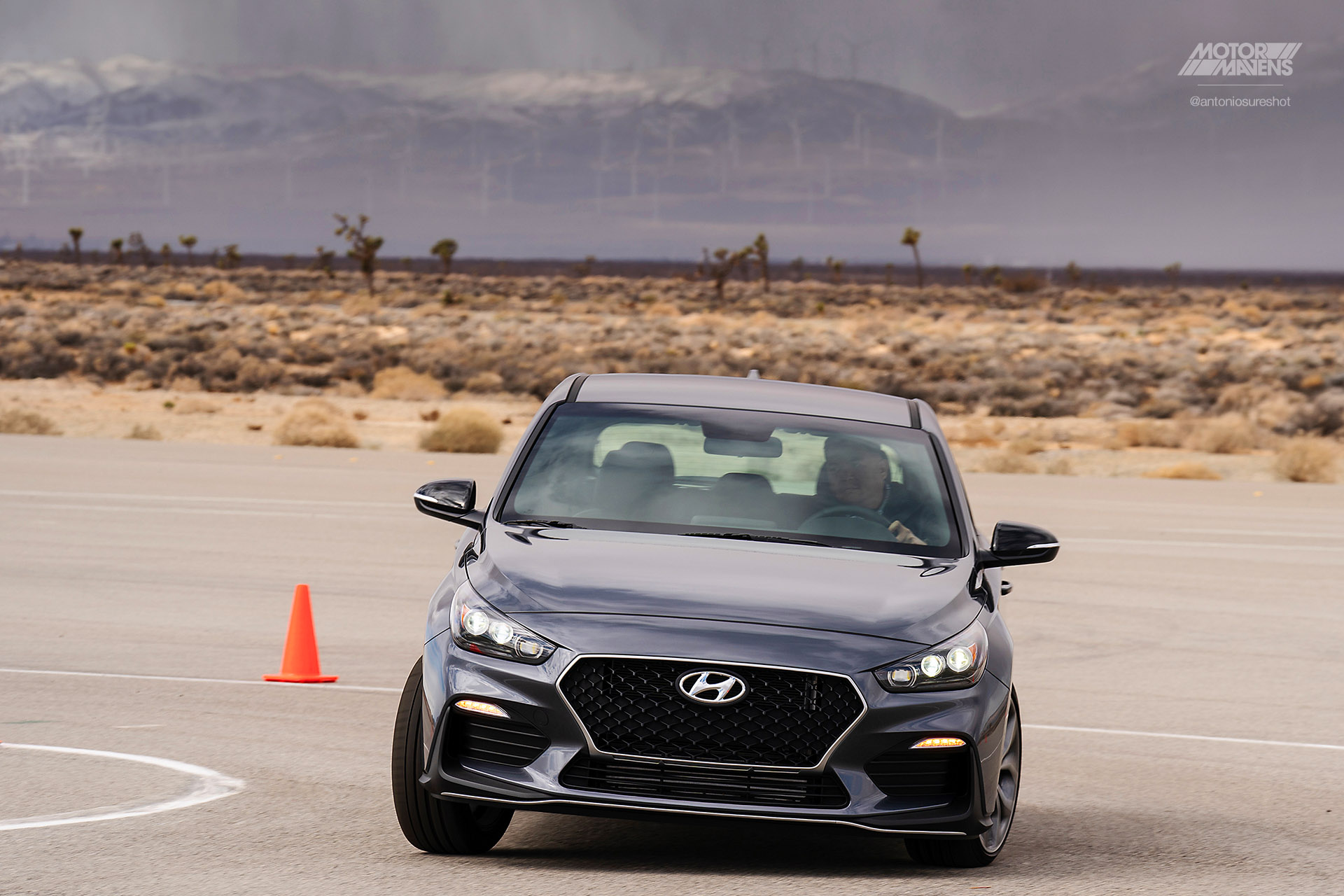 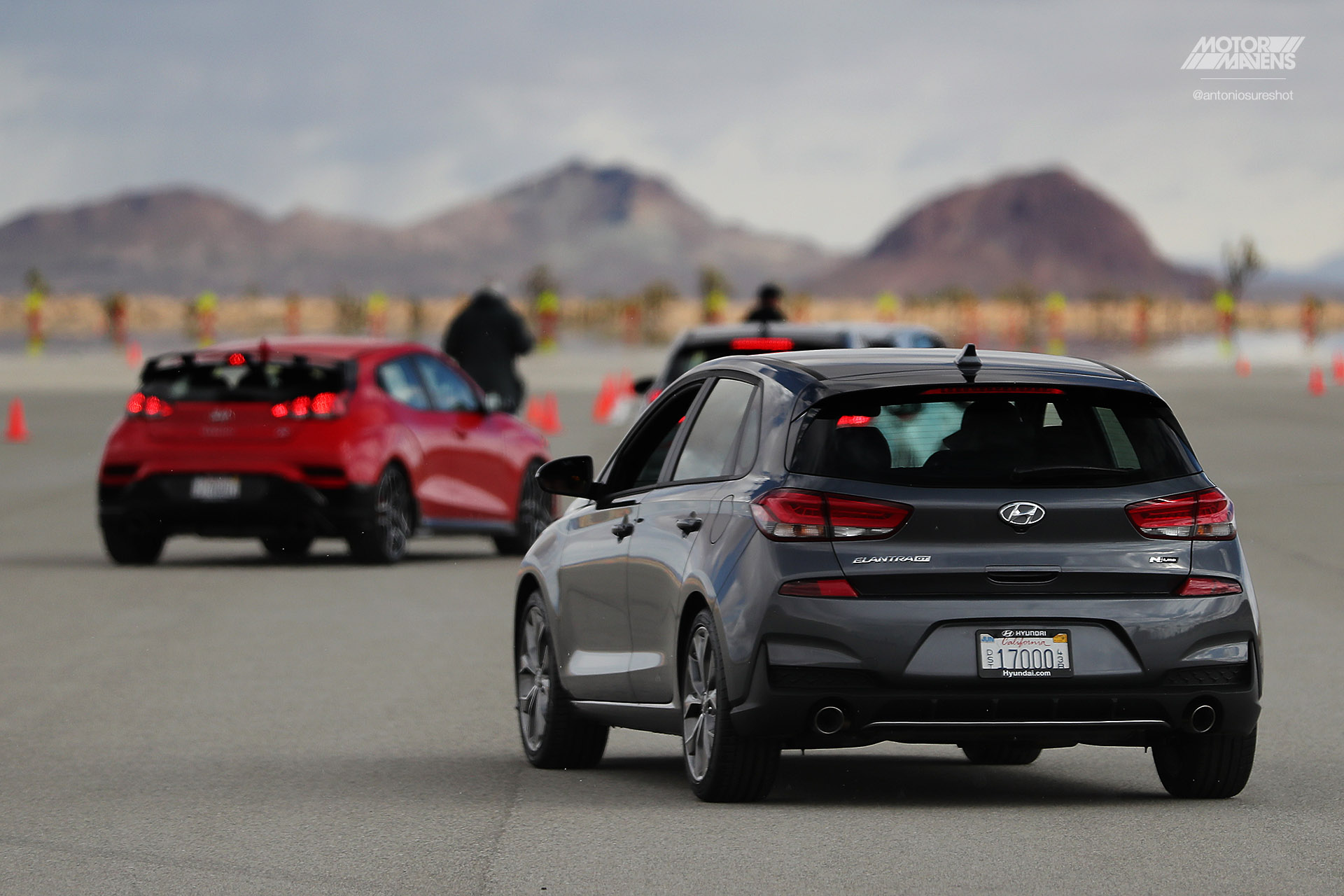 Especially in the dark gray color I drove, the Elantra GT N Line might look like a meek, commuter car from initial exterior glance, but it’s really fun and sporty. 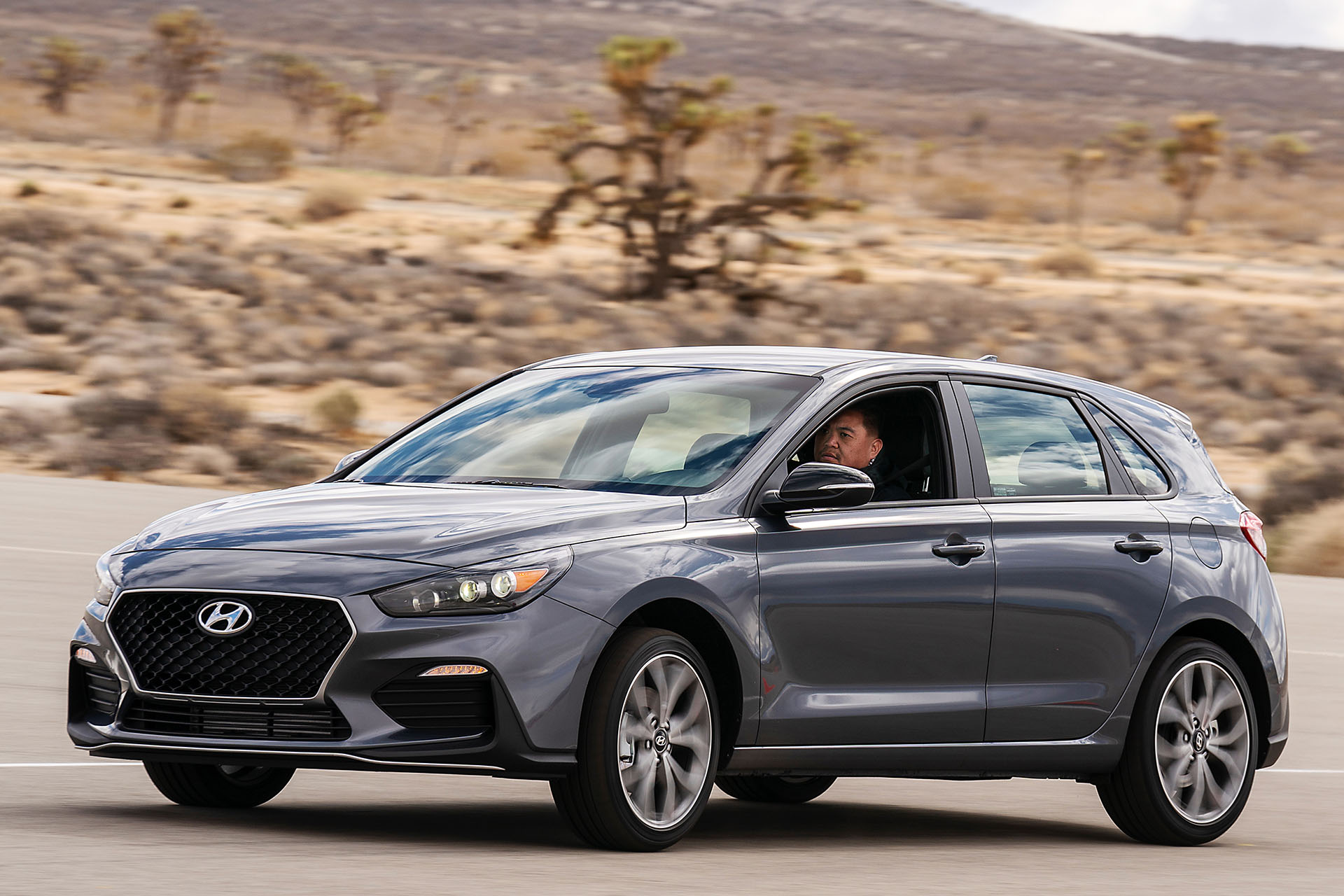 Equipped with a 1.6L turbo 4 cylinder, it’s pretty quick off the line and handles well, the Elantra GT N Line is pretty much perfect for driving quickly through cities like Hollywood, where you need to get to your destination quickly while dodging cars that suddenly dart out of driveways or teenagers riding Bird scooters, crossing the street unexpectedly in front of you (they obviously never cross at crosswalks). 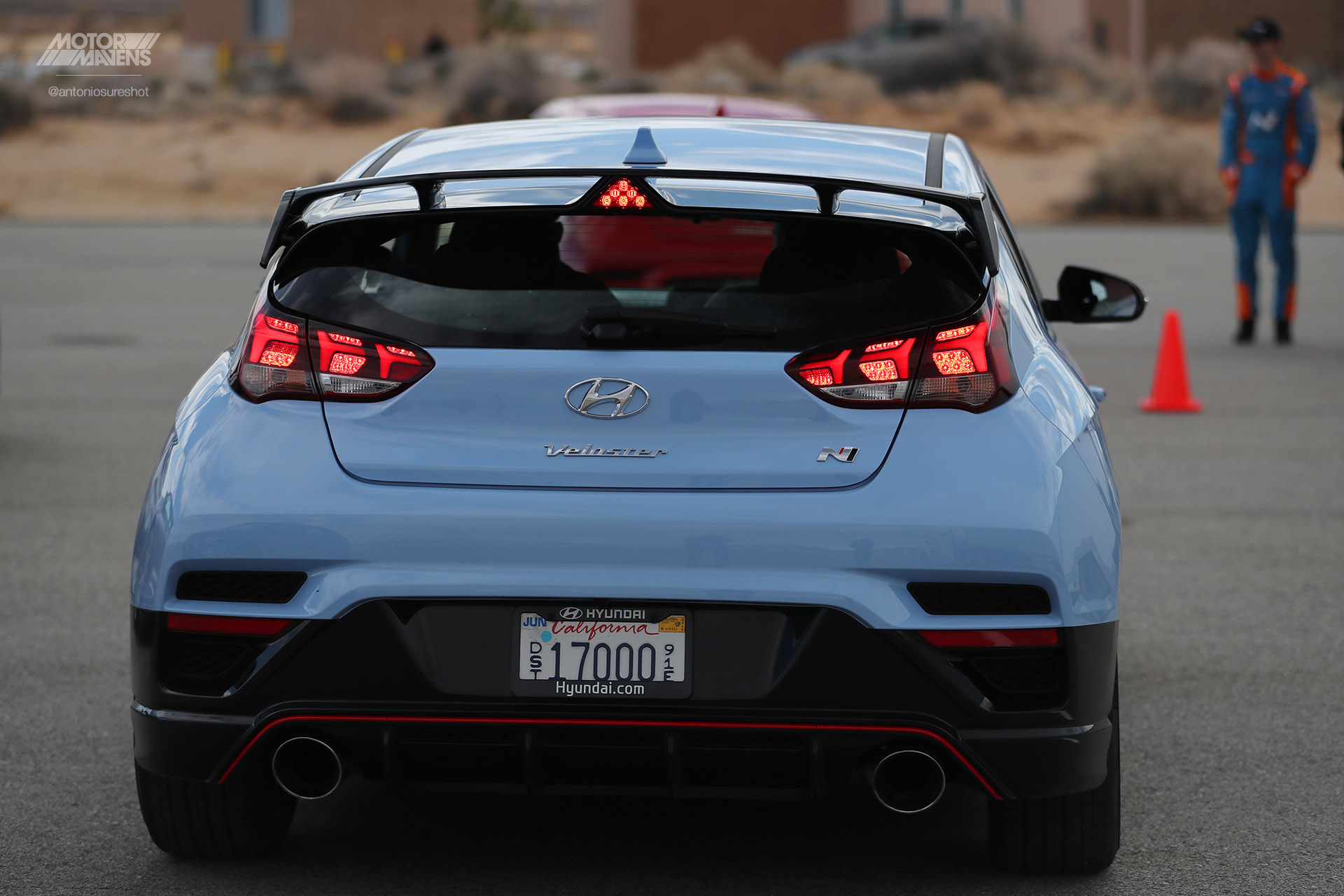 While the Elantra GT N Line was fun and sporty, the Veloster N was a completely different animal. Simply put, the Veloster N might look like a normal Veloster at first, but it has a Jekyll and Hyde complex. When you get in the car and put it in Sport Mode, the vehicle just awakens!

All you need to do is press the checkered flag button on the steering wheel, and the car instantly goes into “race car mode” where the engine just comes alive. It’s kind of like the difference between Clark Kent and Superman.

While I didn’t get a chance to test the Veloster N’s short course handling on the autocross track, I did have an opportunity to drive it on Hyundai’s closed road course, which simulated a high speed race track. This was the very best part of the day for me because this is where I was able to feel the car’s 2.0-liter turbocharged engine with 275 horsepower and 260 lb.-ft. of torque. 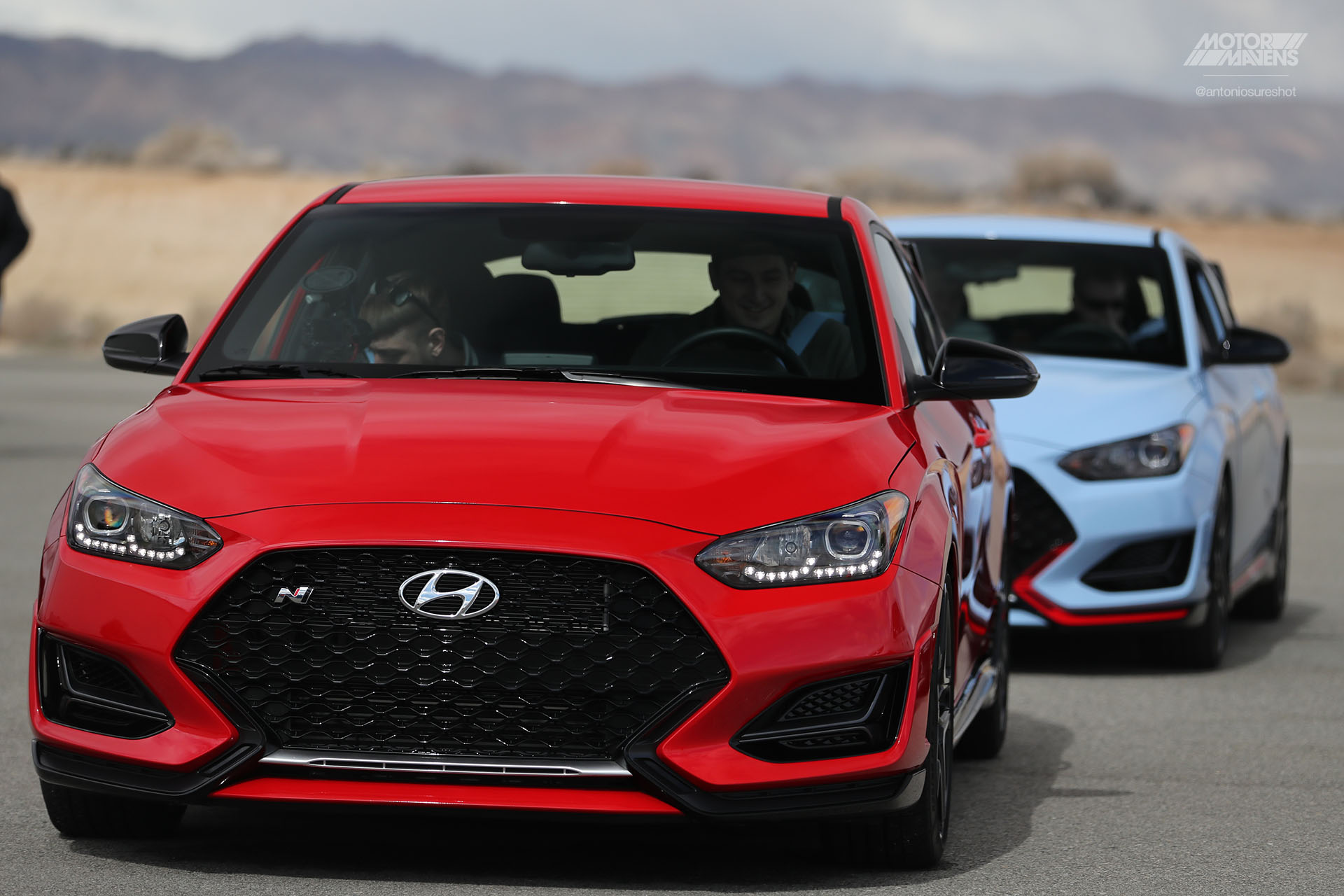 While I really, really wanted to drive the Veloster N in with the hero color scheme (blue and red), my friend Verena got to the car first so I jumped in a red Veloster N. (Not only does she walk faster than most people, as a pro rally driver and former Formula Drift competition driver, Verena can drive faster than most, too.) 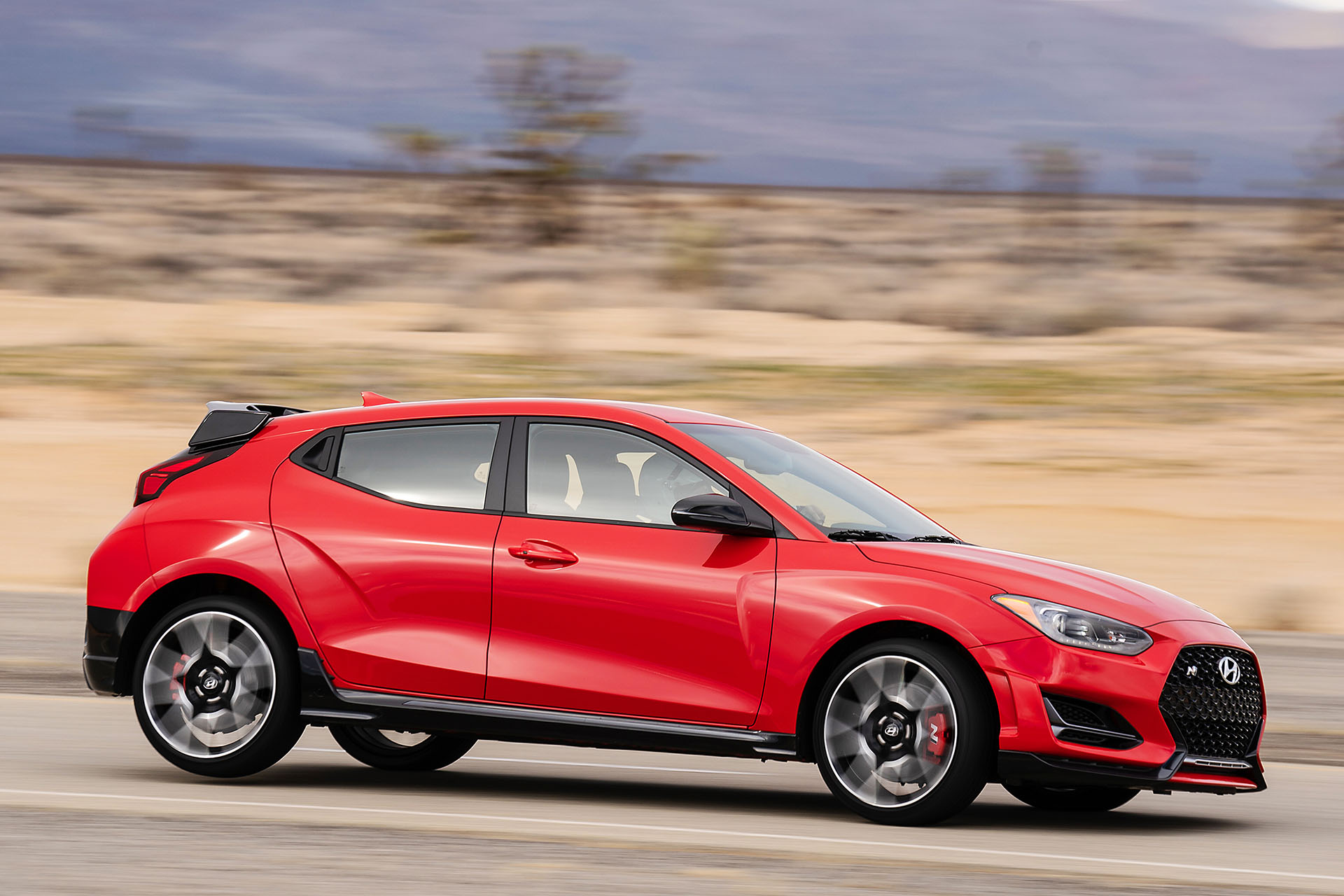 I only had time to do three laps in the car, but that was enough for me to be absolutely impressed! While I’ve driven many Hyundai vehicles before as rental cars and have been happy with the brand’s reliability and comfort, I was surprised at the entire feeling that the Veloster N had.

Since we were driving on Hyundai’s private test track, I was able to test the car’s high speed cornering. I was hitting some of those turns at around 100mph, and the Veloster N felt confident and planted. The steering was precise and responsive, like a race car should be.

With traction control turned off, and with the car’s sport mode engaged, the Veloster N launches from a dead stop like a bat out of hell. The car just pulls. As I accelerated into a high speed banked turn, I enjoyed how confident and stable the Veloster N’s chassis felt at the top of third gear, at the top of the bank, and just how easily the car transitioned when the turn tightened up towards the apex. 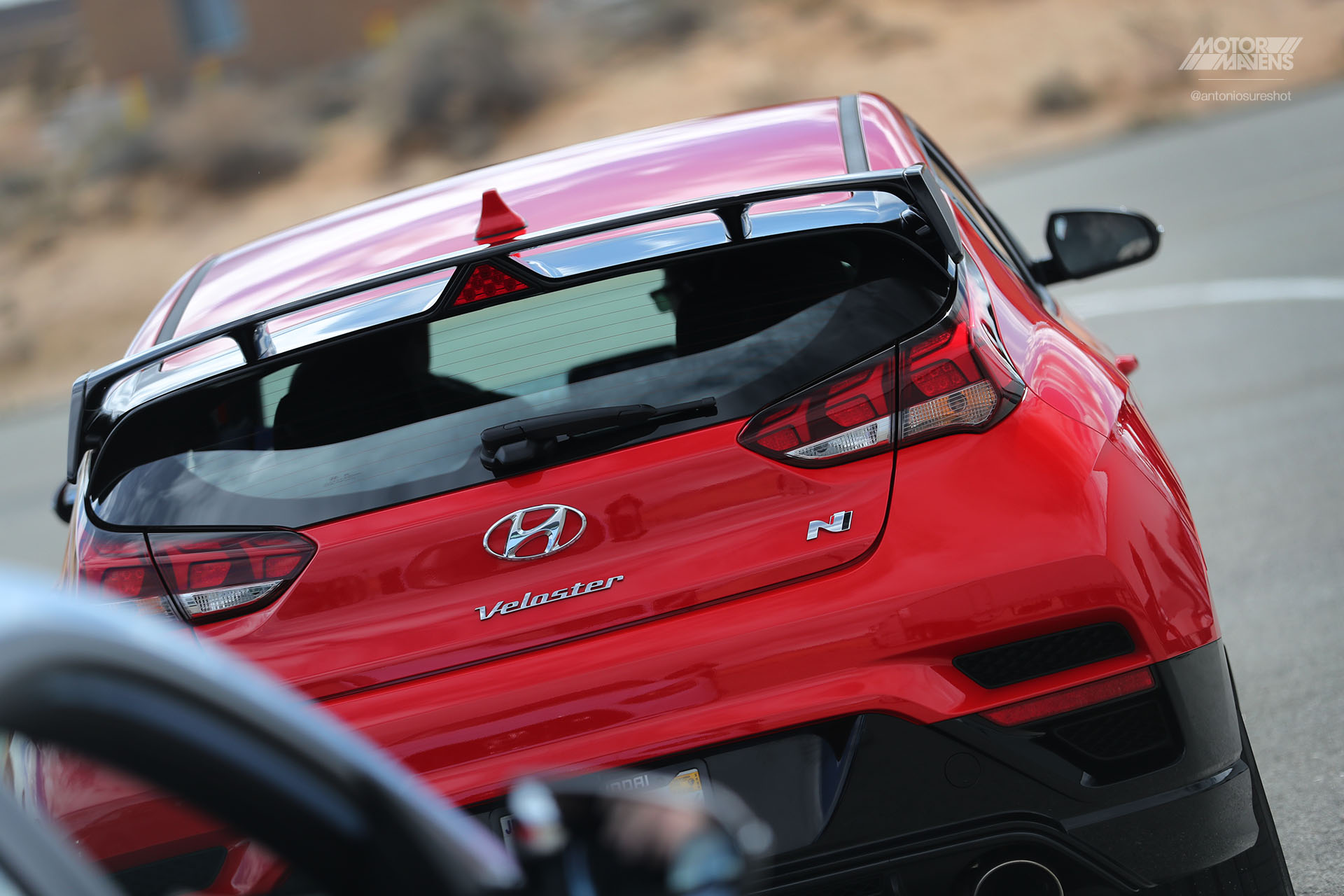 I think the Veloster N would be a great car to modify with aftermarket wheels and other parts for a daily drivable, weekend track warrior!

Even though I had a very short time behind the wheel, I absolutely loved driving the Veloster N. I can’t wait to spend more time with the car in the future!