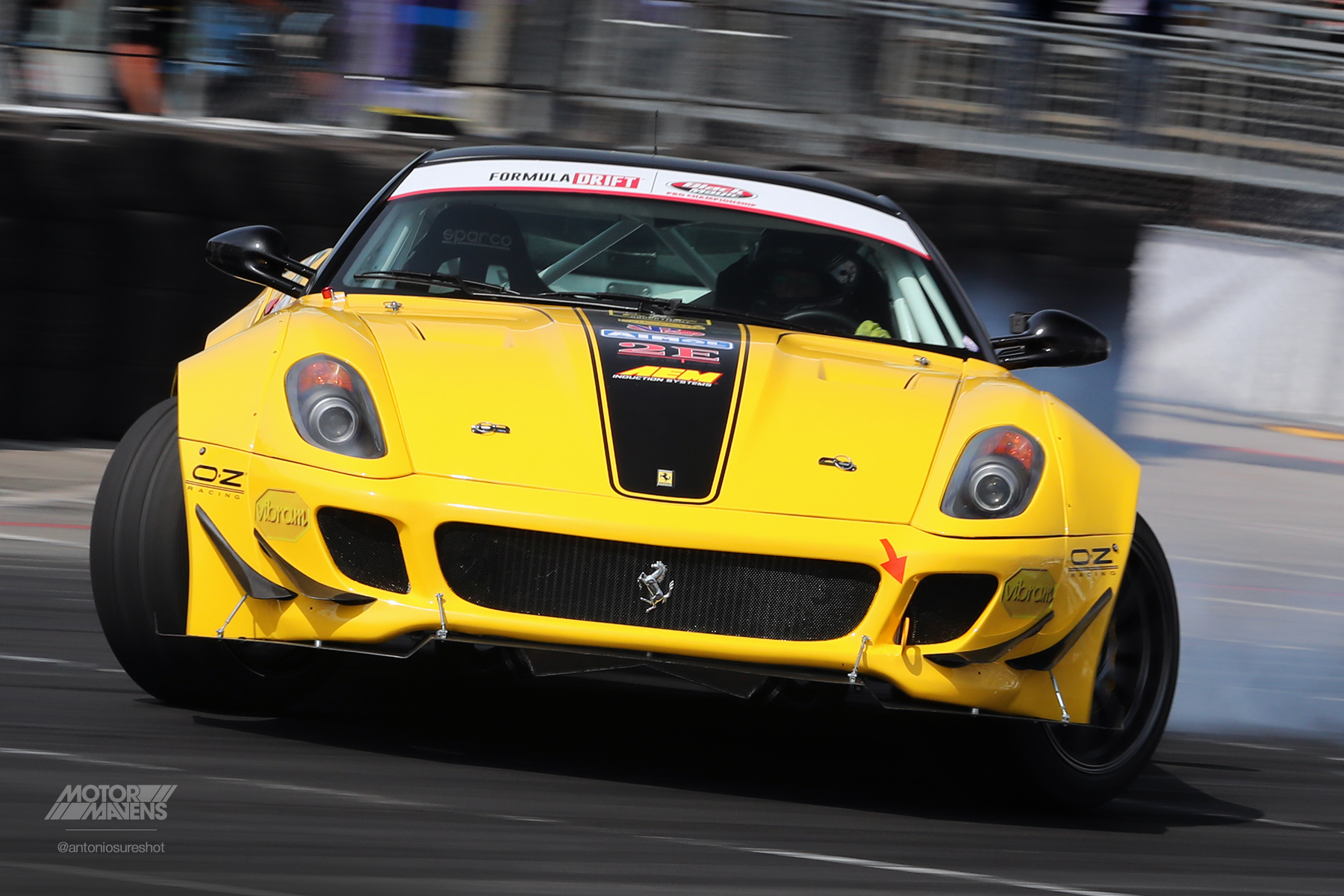 One of the most widely talked-about vehicles from Formula Drift this year wasn’t even the car that won First Place in the final competition. Everyone with an Instagram or Facebook account who follows drifting in the United States has heard about Federico Sceriffo‘s infamous Ferrari 599 GTB Fiorano catching on fire at the 2018 Formula Drift season opener this past weekend.

While some folks were quick to make crass jokes and/or memes (this is the internet generation, what do you expect?), it’s nice to know that most of the people who were there at the event and witnessed the blaze happening live were genuinely concerned for Federico’s well being, and were just glad to see him escape the fire without any physical harm! Thank God for that! 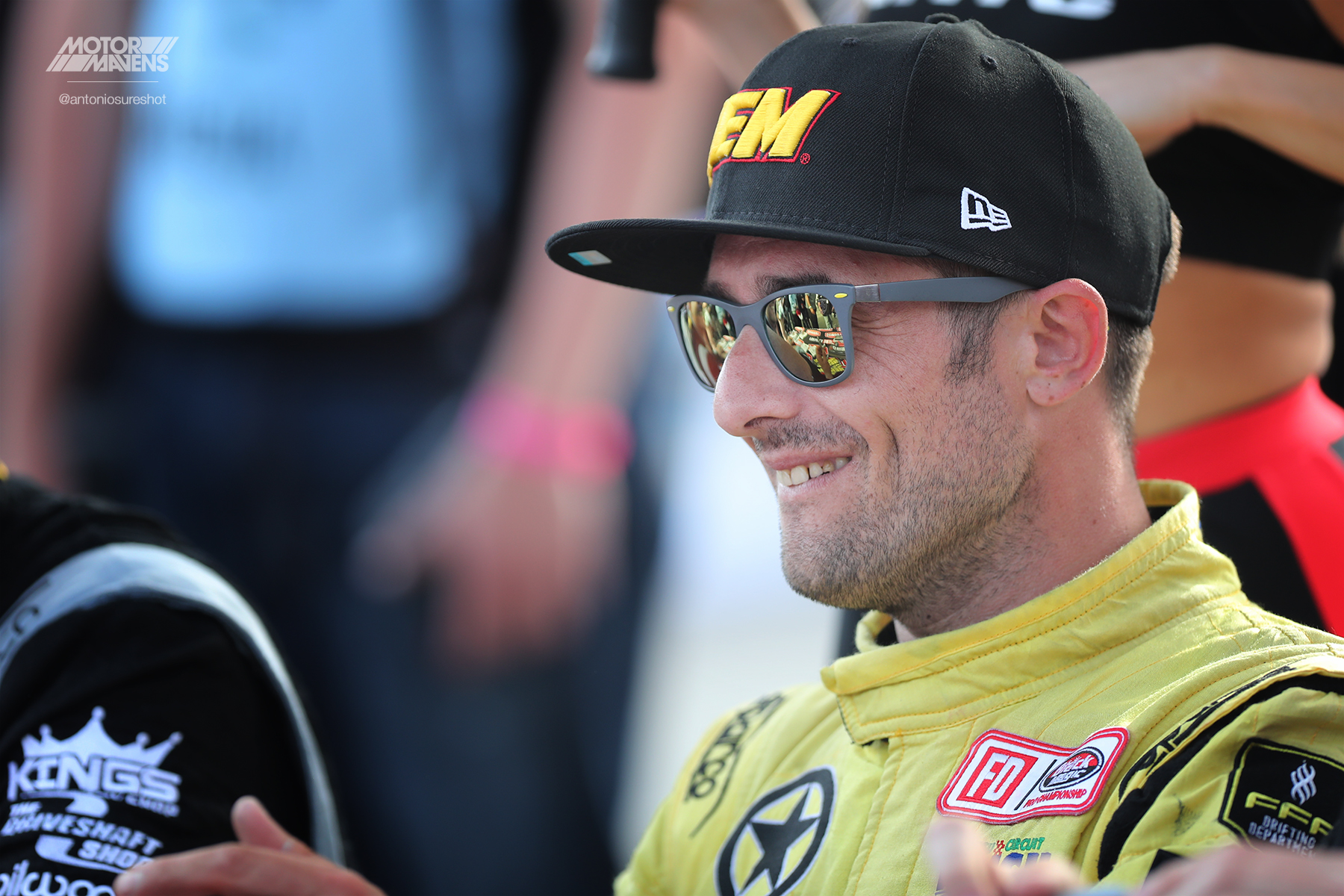 It has been exactly ten years since I first met Federico Sceriffo. Back when I was working with Speedhunters, we traveled to an event called IDC (nowadays, idc means “I don’t care” in internet slang, but back then, it stood for International Drift Challenge) at the Nurburgring. At the time, Federico had just qualified for his drifting license and was new on the scene with his rear wheel drive Subaru WRX! 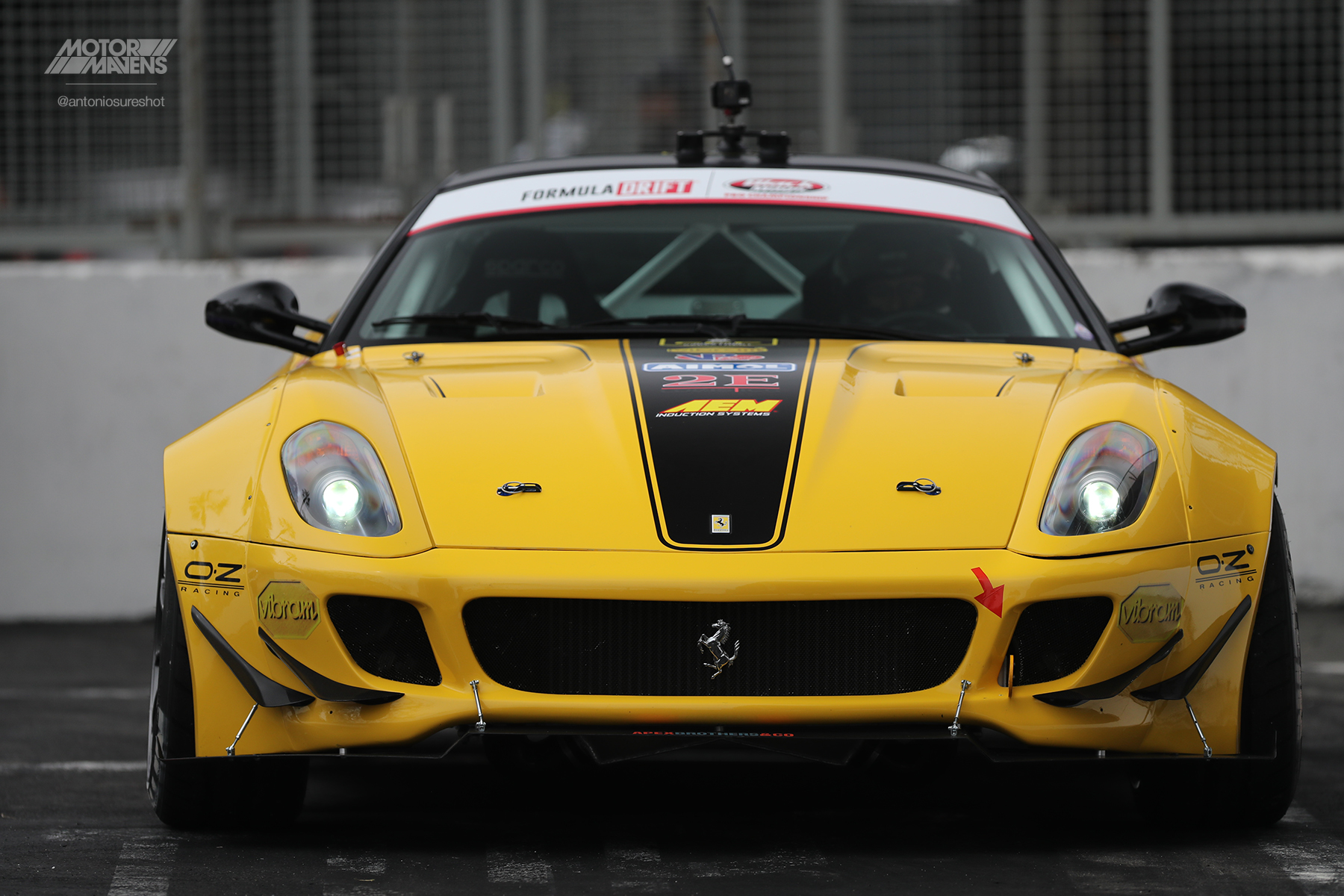 Federico sure has come a long way since 2008. Since then he drove in Japan in the D1 Grand Prix series, and was welcomed into the Team Orange family by D1 Grand Prix Series Champion Nobushige Kumakubo, owner of the legendary Ebisu Circuit in Fukushima Japan.

Obviously, Federico has moved on from driving Kumakubo’s 2005 D1GP Series Championship RWD Subaru Impreza that was previously on the cover of Super Street Magazine, and has since found himself behind the wheel of Fiorella, this purpose-built Ferrari 599 GTB drift car with a twin-supercharged V12 engine. 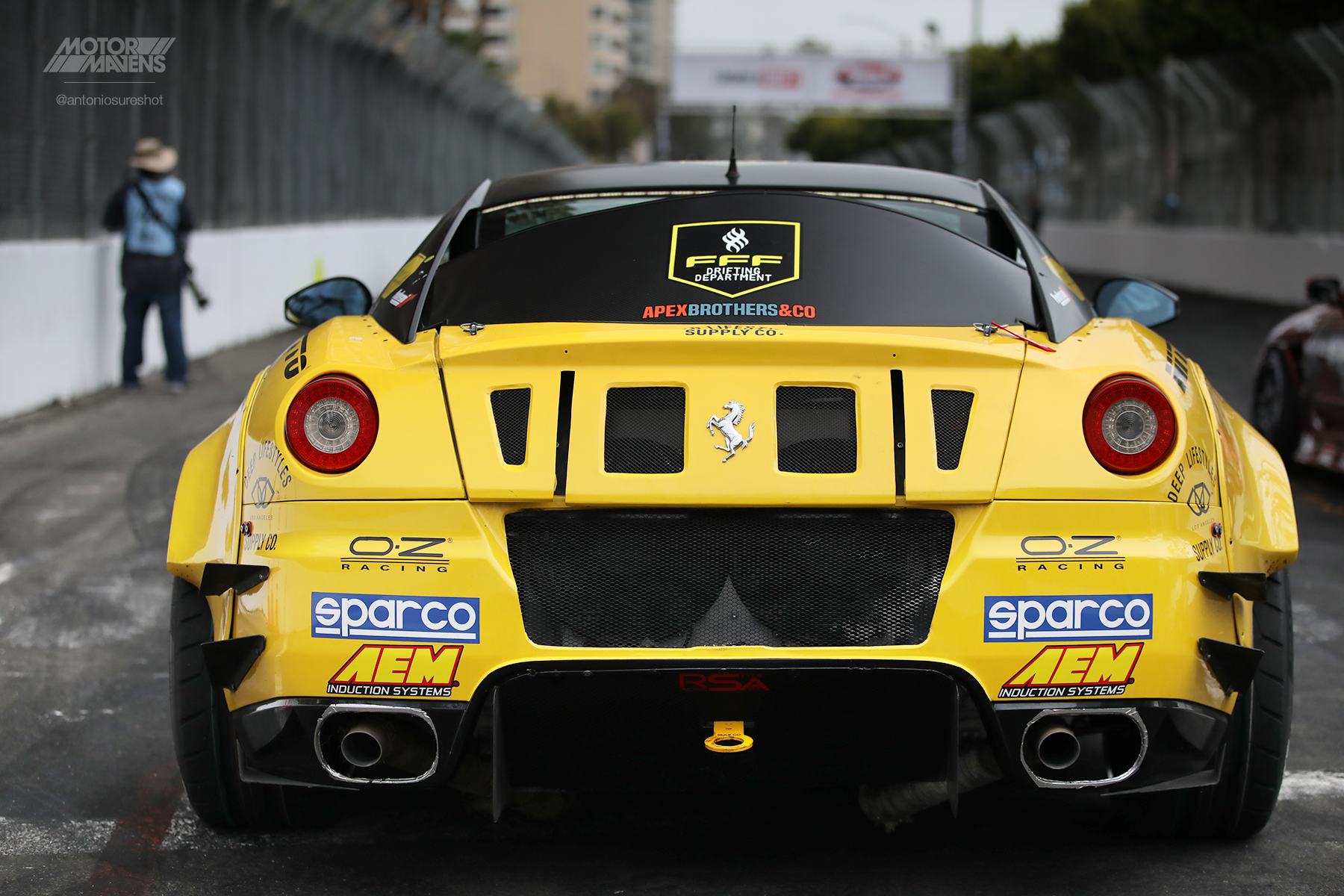 We don’t have a ton of details about the Ferrari 599, but it is very obviously wearing Ben Sopra R35 GTR style fenders and widebody, along with a bunch of canards and diffusers on the bumpers.

Federico has been sponsored by Sparco for many years, so he proudly has the blue and white logos on the car, and Sparco racing seats and safety equipment inside the car. 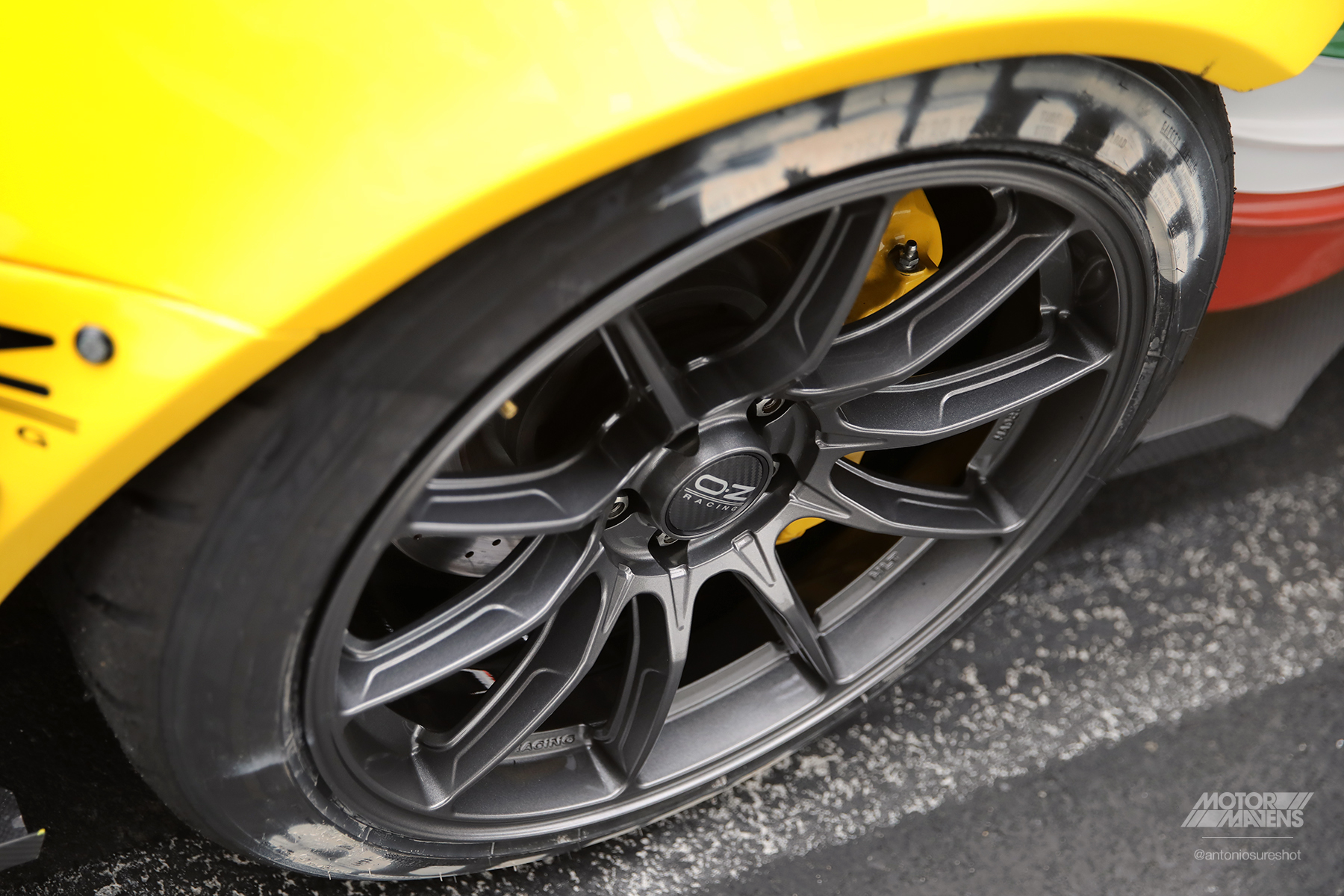 Under the massive fender arches are a set of OZ Wheels wrapped in Nitto tires, with factory Ferrari Brembo brakes peering through the spokes. 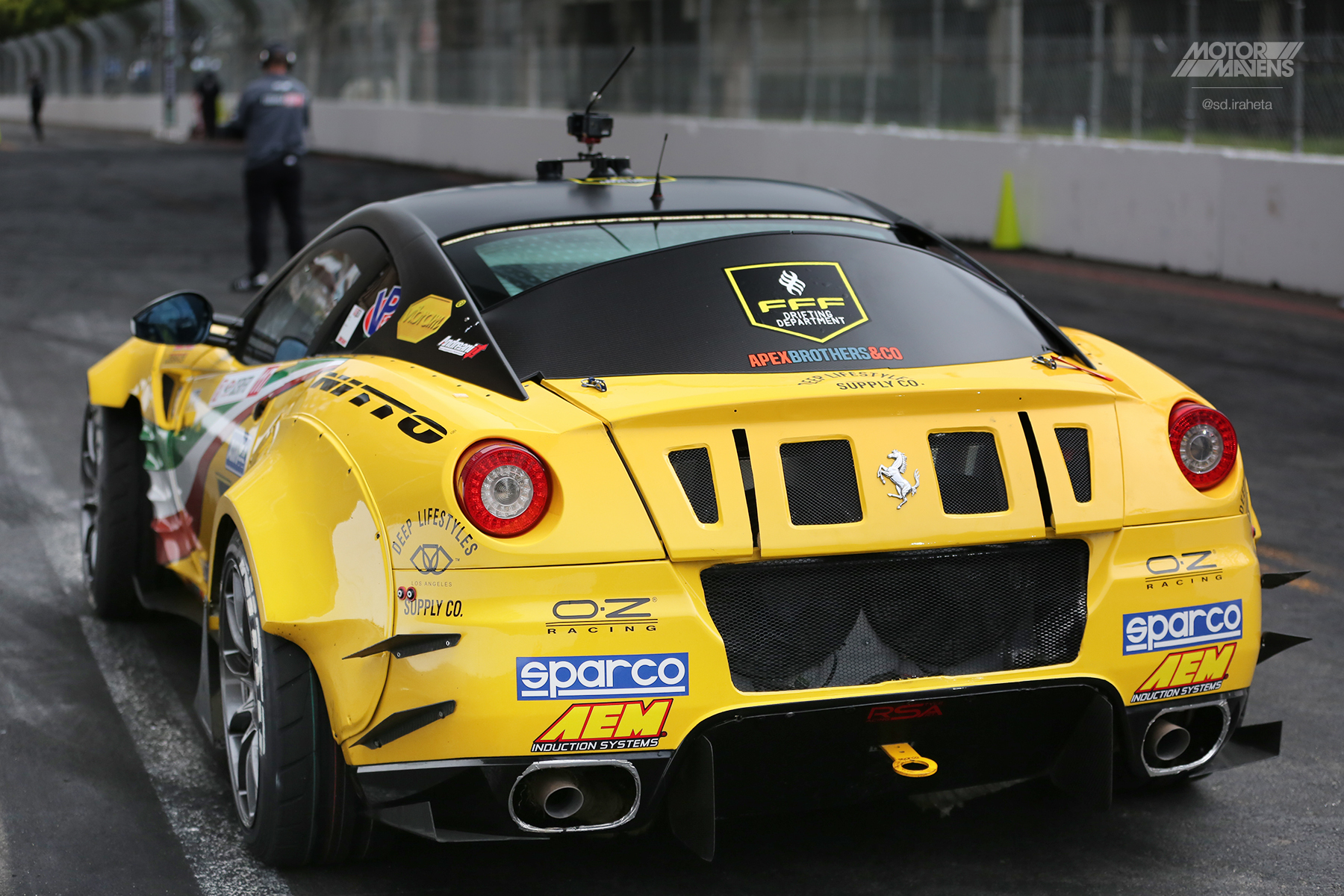 This shot shows how the car sits, with the OZ wheels, Nitto tires and the humongous fender flares. 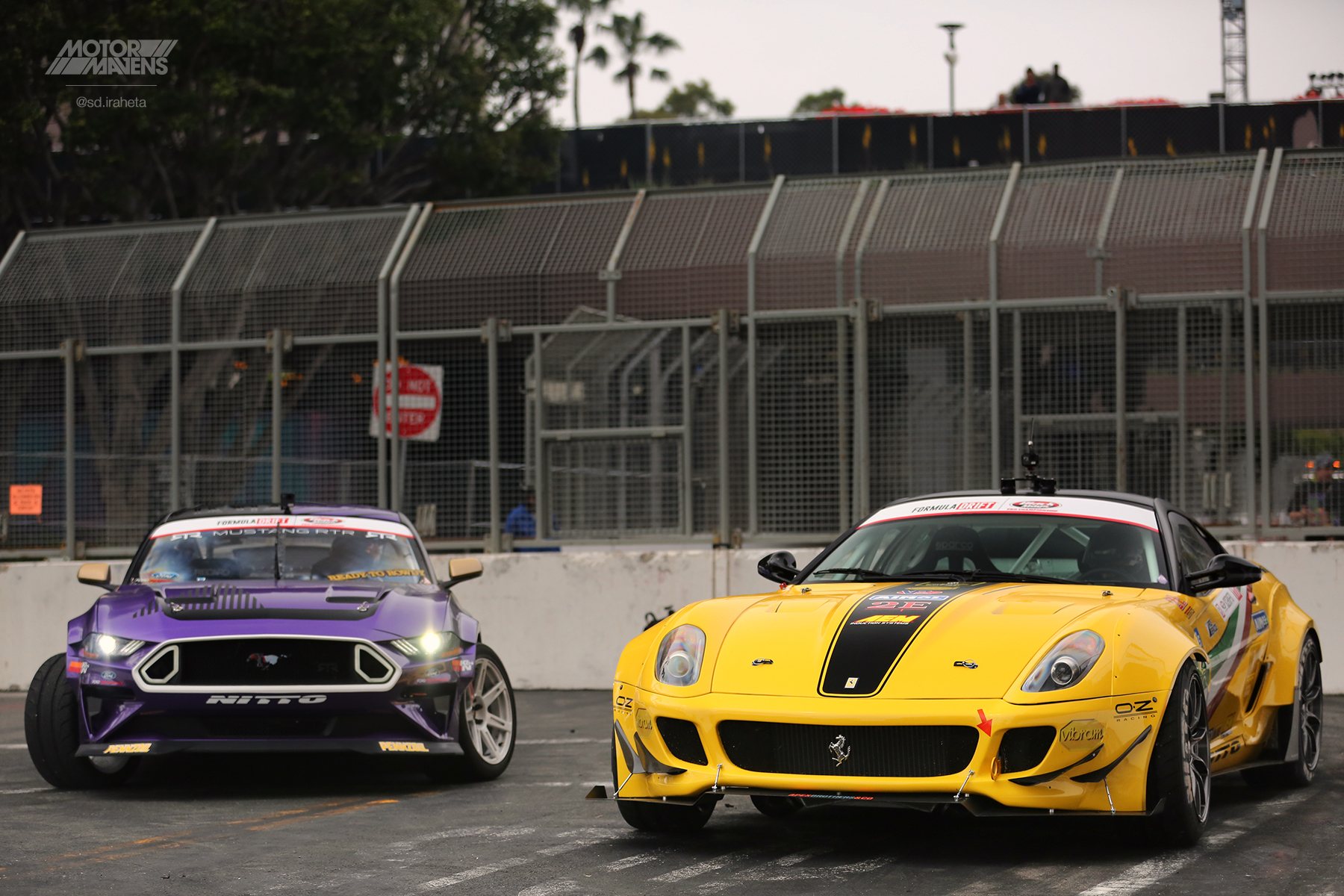 Here are the last few photos we shot of Federico’s Ferrari before he went off into tandem battle with Nitto teammate Chelsea Denofa, who piloted the Mustang RTR. 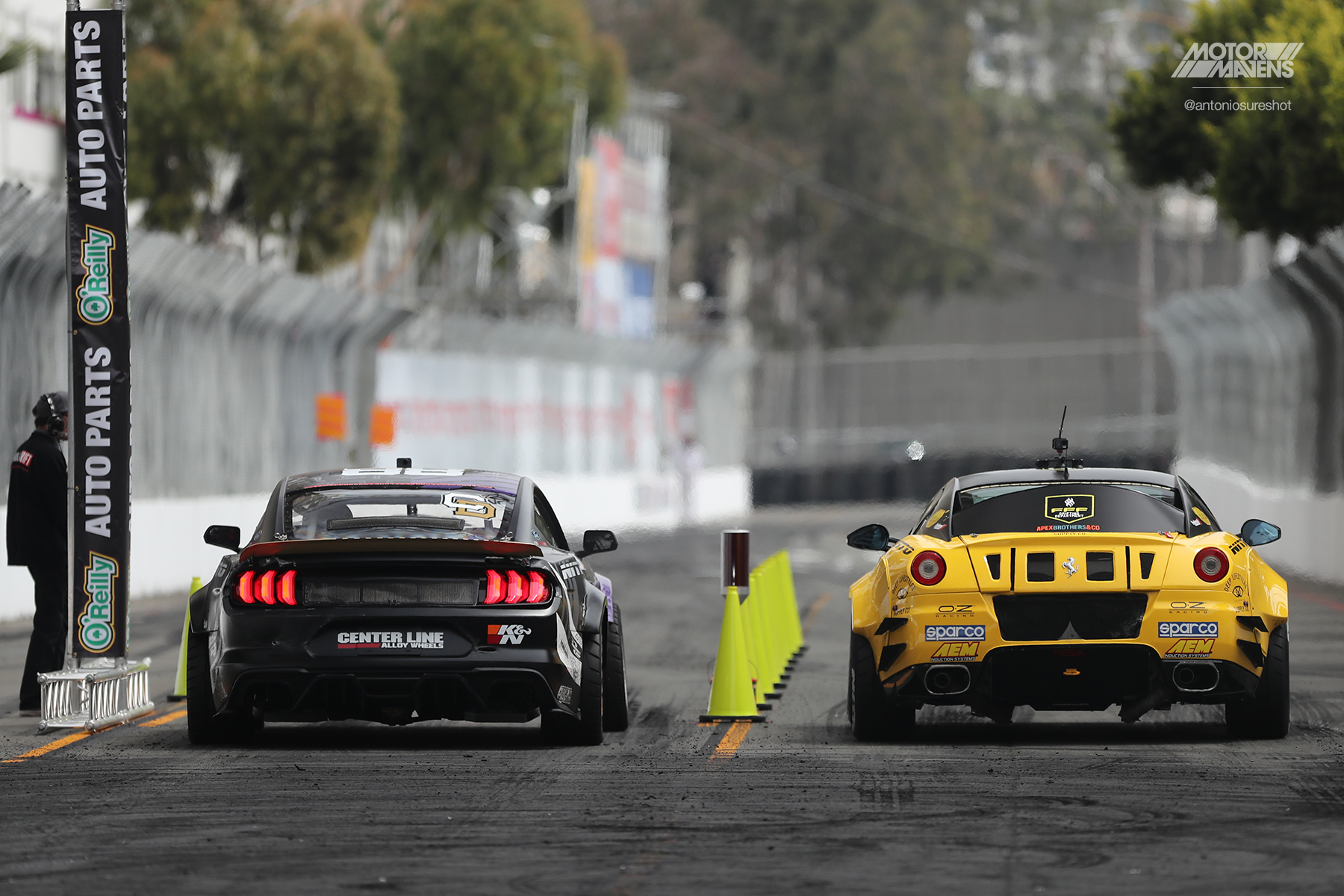 Here’s the view of the two cars lining up at the start, right before the fateful incident.

Above is a link to the video on YouTube. We know the car is already being repaired, and are just thankful that Federico escaped the fire unharmed! We can’t wait to see how Federico and his Ferrari perform at the next round of Formula Drift!