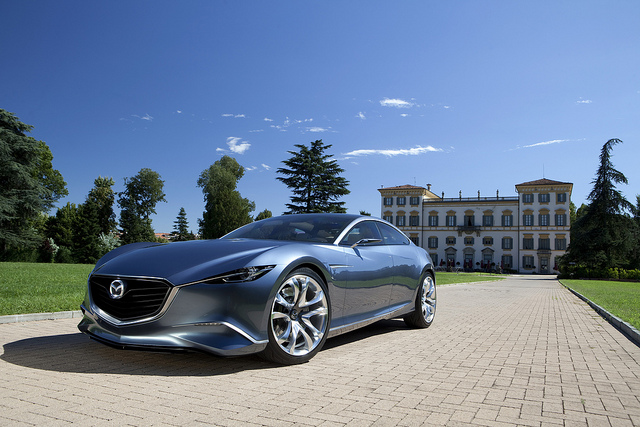 When I saw the first pictures released of the Mazda Shinari Concept, my immediate thought was Art In Motion. Corny, maybe, but it was an honest reaction. It was so beautiful to me. So, imagine my recent good fortune to get an opportunity to attend a Mazda press event!

At the event, I was given some information concerning what lies ahead for Mazda – the design path (and general mindset) that they will be taking to bring you a Mazda worthy of the 21st century.

As a part of this new direction that Mazda is taking, the Director of Communications briefly highlighted The Shinari. He didn’t go into specifics but my mission for MotorMavens was clear – to find as much information about this car as possible. Not to mention, it wouldn’t be MotorMavens if I couldn’t find good pictures as well, right? Mazda’s development of the Shinari Concept is based on KODO – a Japanese concept which loosely translates to English as Soul in Motion. Kodo, as a concept, is an extension of Mazda’s historical emphasis on exploring various forms which depict the essence of motion. In recent years, this has been fused with a desire to capture the graceful beauty of movement in Nature – as in the flow of wind and water. All in an attempt to realize a unique design expression for Mazda which has become known as Nagare or flow. Recently added to this is the underlying design philosophy of capturing the power and beauty that one finds in the pure movement of animals or humans. If you’re wondering what that means, think of the instant when a cheetah pounces on its prey or the power captured within the moment of a well executed sword strike in the ancient Japanese martial art of Kendo.

It is this moment, where accumulated force is released, which contains the most finely-honed balance of strength and streamlined beauty. It is in this instant, which requires maximum concentration, that we feel instantaneous power, speed, a dignified tension – a sophisticated beauty. It is, in its way, highly seductive. And who doesn’t like a bit of seduction now and then? Mazda has conceptualized this instantaneous movement, filled with vitality and the stirring of the emotions, as the ultimate form of motion, and has defined it as Kodo. Kodo will be incorporated into all Mazda designs to express a faster, more forceful movement – and to include a more soulful element. This is embodied in the design language of ‘KODO – Soul of Motion’ and it represents the next generation in Mazda design. Yasushi Nakamuta, the Chief Designer who led the design of the third generation Mazda MX-5, was the creator of the Shinari Concept: “The challenge for us was to create an innovative new expression for energetic and powerful movement; something that we had never attempted before.”

I have a great deal of respect for the cohesive artistry that is interwoven throughout Japanese culture. Everything from pouring tea to writing and the manufacturing process is infused with a respect for aesthetics within function. In essence, life becomes art. This is what became apparent to me as I heard more of the story of the translation of design concepts like ‘instantaneous movement’ and ‘KODO – Soul of Motion’ which were being interpreted by the Mazda design team for the Shinari Concept. Each team member was encouraged to create sketches and sculpted clay models of their perception of what these concepts would look like in automotive form. Of course, this was only after they had all participated in activities that allowed the entire team to draw inspiration from a variety of places. The Shinari Concept is the result. I think they were successful. With power emanating from every panel and component, the Mazda Shinari looks ready to leap at any second. The look of the A-pillar, which tapers toward the rear of the body; the shape of the cabin; the front fenders; these, along with the Shinari’s other design elements, combine to create proportions which suggest the instantaneous release of suppressed energy. It simply looks as if it is poised to strike. When creating the Shinari Concept’s interior, Mazda’s objective was to design a distinctive premium cockpit – one that incorporates the Kodo DNA of the exterior. While the exterior design can be appreciated through motion, the interior is experienced in a static, seated position. A commitment to essential mechanical function and excellent ergonomics has created a driver focused interior that embodies the ‘ultimate athletic space’ while expressing a sense of speed inside the vehicle.

Mazda Design wanted to re-define the proximity of the driver to the instrumentation and controls by establishing intuitive ‘reach zones’ – what Mazda calls ‘dedicated driving ergonomics.’  All instrumentation and controls have been designed and positioned to enhance the driving experience. By separating the instrument panel into two individual zones, the driver cockpit is isolated from the rest of the interior and allows the driver to focus on the task of driving.

Entering the vehicle, your eyes are immediately drawn to the cockpit. Its angle and surface movement sets the tone for the entire experience of the interior – an experience which is marked by a craftsmanship that incorporates the use of bright trim work along the cockpit’s perimeter to accentuate the sensation of speed. Not to mention that the use of authentic materials such as machined aluminum, natural leathers, and precise design gives the interior a quality that exceeds expectations. This car is a giant leap forward for Mazda and its design team. The Shinari is a culmination of existing design concepts from the Mazda RX-8 translated into a beautiful, four-door sedan. But, if you’re like me, you’re probably left with a few questions. Maybe you’re wondering if Mazda will bring this car to production and maintain all of the design cues you see here? My inner realist is screaming no – but, we can only hope. With all of this ‘looking as if it’s ready to leap forward’, maybe you’re wondering, if the car is actually fast? I don’t know but I would certainly love the opportunity to test drive it and get back to you. Mazda? Are you listening?