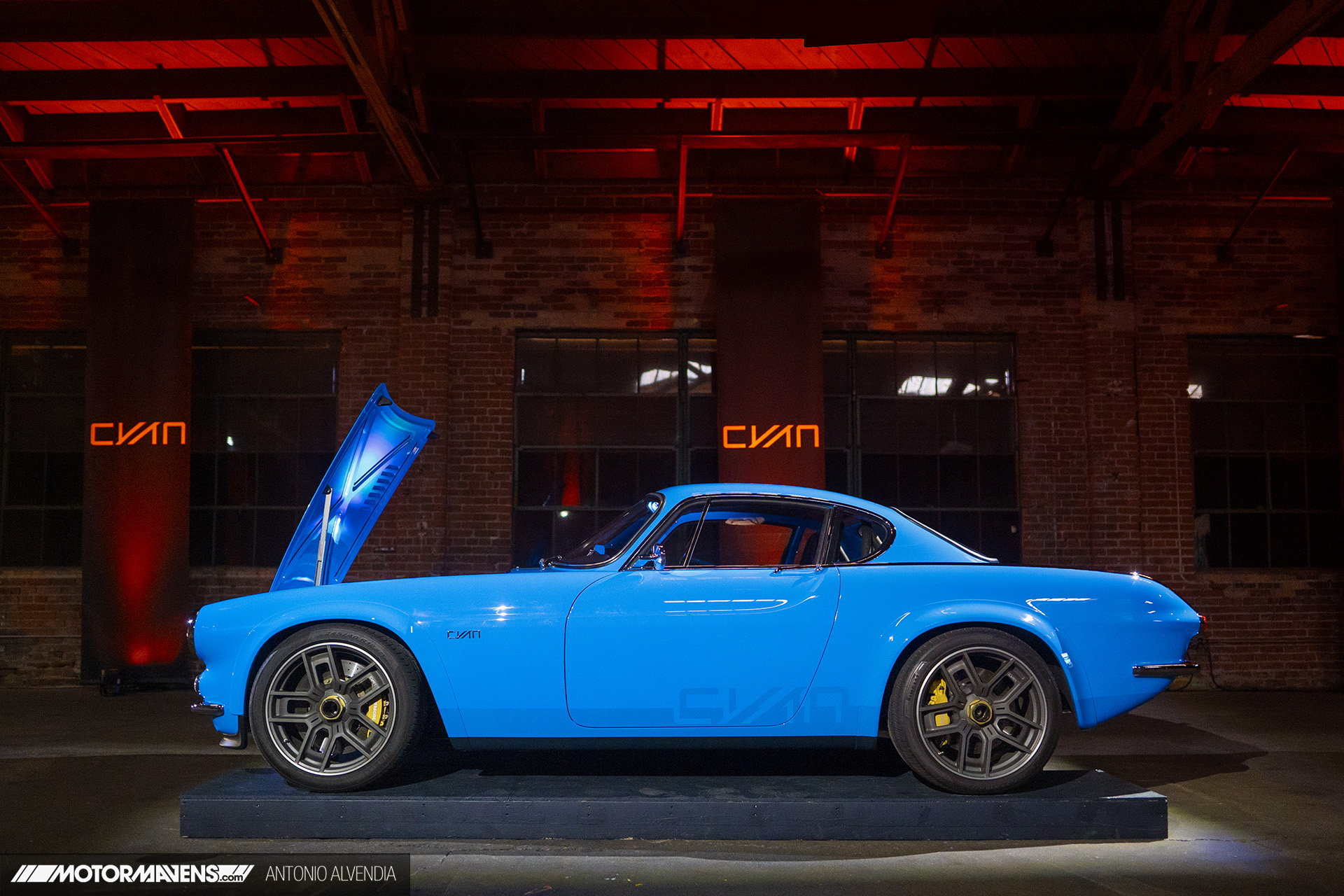 Cyan Cars is the pinnacle of Swedish motorsport engineering and coach building. Proving that statement is their completely bespoke Volvo P1800 Cyan Turbo, a concept prototype that was painstakingly built by hand in their hometown of Gothenberg, Sweden. Calling this car a restomod doesn’t even begin to do it justice – it’s a marvel of engineering and execution with much more detail than most people might realize.

Even if you’ve never heard of Cyan Cars, if you follow touring car racing at all, you’ve likely heard of Polestar, the company’s former identity (before the brand was sold to Volvo). “The company was founded in 1996 to race Volvos in Sweden and the Volvo P1800 Cyan is closing the circle for us,” said Christian Dahl, CEO and founder of Cyan Racing. “After winning many national racing championships, we claimed our first World title with Volvo in 2017 and have since won four further world titles with two more manufacturers. The first Volvo P1800 Cyan carries our blue racing color to mark our heritage.” 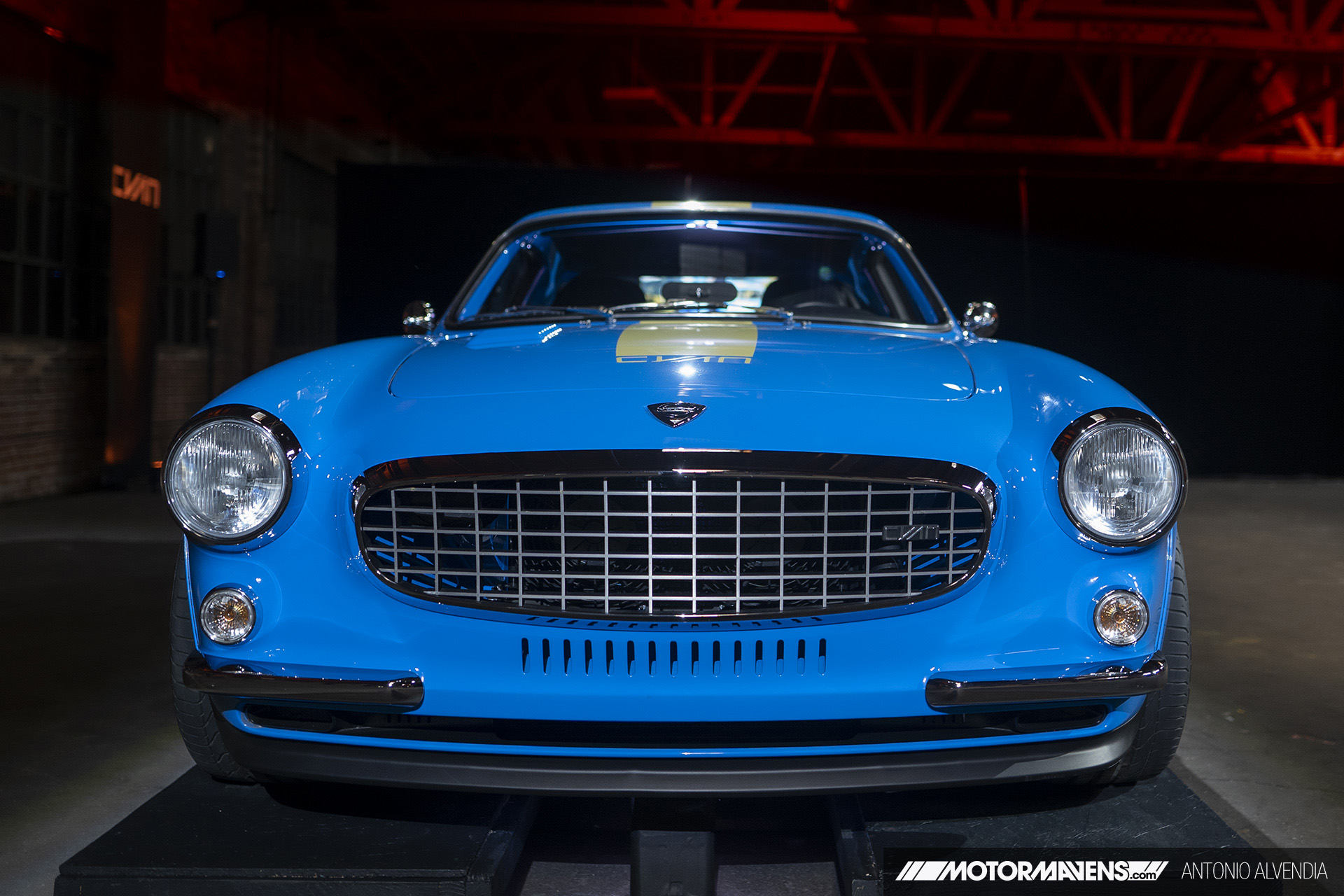 A casual spectator might think the Volvo P1800 Cyan is a just a clean-looking classic Volvo, but they would be wrong. At the reveal event, I heard people referring to the vehicle as a restomod, but I disagree with that term for this car as well – it wouldn’t even begin to describe the details and engineering put into this vehicle, which might look like a Volvo P1800 to the untrained eye, but a closer look (and explanations from Cyan engineers) will reveal a whole lot more detail under the surface.

Every single chrome looking piece on the vehicle, from the large grill, the headlight bezels, the side mirrors, and even the split bumperettes have been CNC cut out of a huge billet piece of aluminum. Every minute detail on the vehicle had tons of thought and planning from the Cyan engineering team put into it, and as a huge fan of racing engineering and beautiful vintage cars, I was blown away.

Most spectators might overlook the absolutely beautiful chrome moldings finishing the tops of the fins on the rear quarter panel, but I was awestruck at how these chrome trim pieces (which must be crazy expensive because, again, they were cut out of a huge billet of aluminum) led fluidly and seamlessly into the door handle. What an absolutely beautiful design! This goes back to my previous statement – the Volvo P1800 Cyan isn’t a restomod; it’s a masterclass in racing engineering and automotive body sculpting. 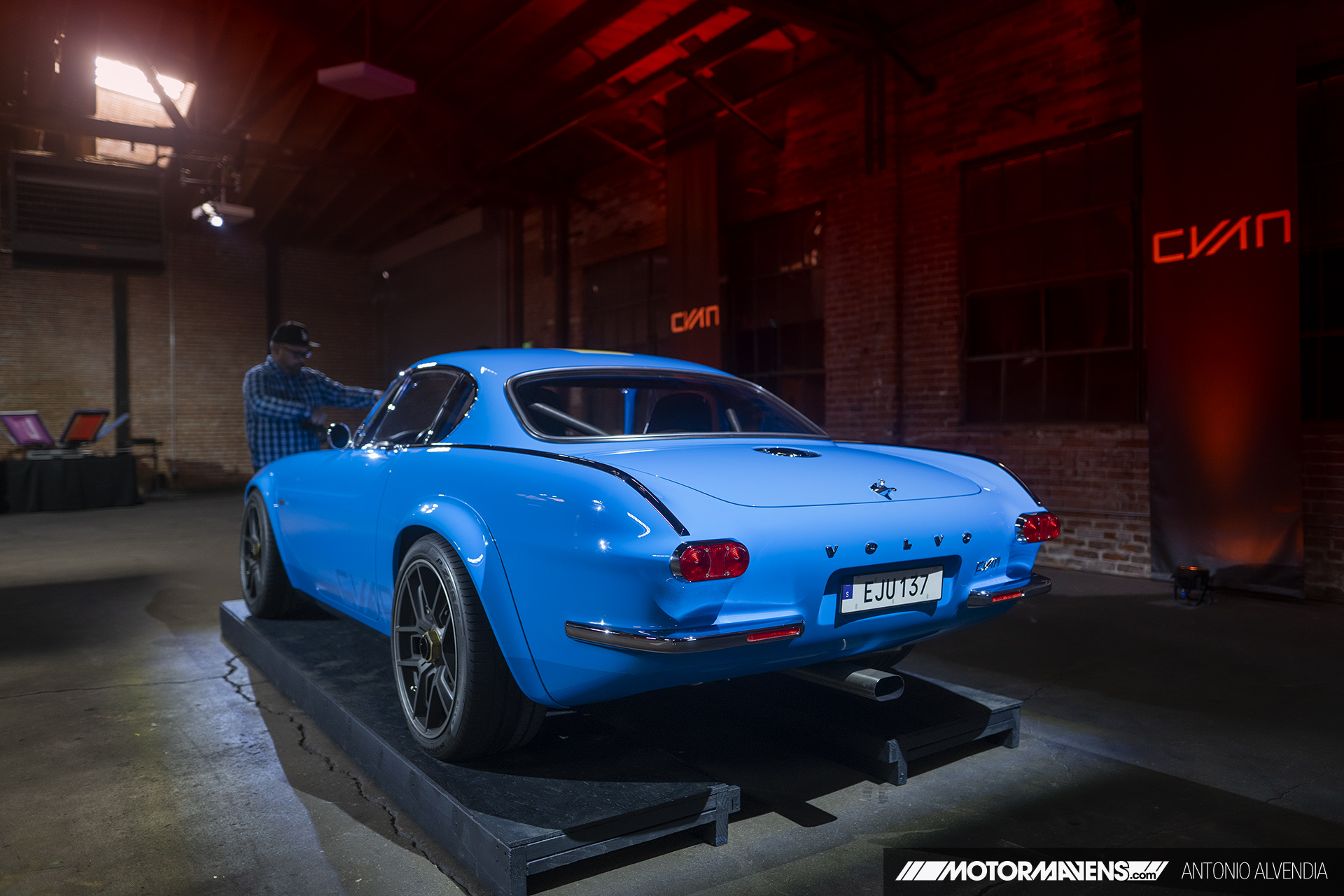 The original Volvo P1800 was unveiled in 1960, a year before the Jaguar E-Type, two years ahead of the Ferrari 250 GTO, and three years prior to the Porsche 911. The Cyan team was inspired to create what could have been if their race team had been around in the 1960s, racing the P1800. Then they thought about what would happen if they would be able to design a road version of that P1800 race car, as they did with the Polestar Volvo C30 and S60. The Volvo P1800 Cyan is their interpretation of what could have transpired if all these elements came together.

There are so many subtle details in the Volvo P1800 Cyan, from the slim LED lights integrated into the split chrome bumpers, to the sleek overfender flares, the oval-piped exhaust for a combination of airflow and ground clearance, to the centerlock wheels wrapped in Pirelli PZero tires, and AP Racing calipers behind them. Also, the wheel housings were enlarged to accommodate the widened track and longer overall wheelbase, not to mention the huge forged centerlock wheels, which measure 18×8.5” front and 18×9.5” in the rear.

Since the Cyan team has so much technology at its fingertips, they admitted they “could have built an electric Volvo P1800 filled with all the latest technology, comfort and luxury. But that wasn’t what we wanted. We desired something more visceral, capturing the spirit of the 1960s with the technology of today.”

Since the original Volvo P1800 is more than 50 years old and most 1960s cars are made with low quality steel that flexes, the team at Cyan completely re-engineered the vehicle’s original structure and strengthened weak points in the chassis through triangulation using high-strength steel.

The Volvo P1800 Cyan isn’t just more rigid than a normal P1800, it is also a lot lighter, weighing only 2180 lb (990kg), which means this thing must feel like a rocket with its 420hp turbocharged engine under the hood. 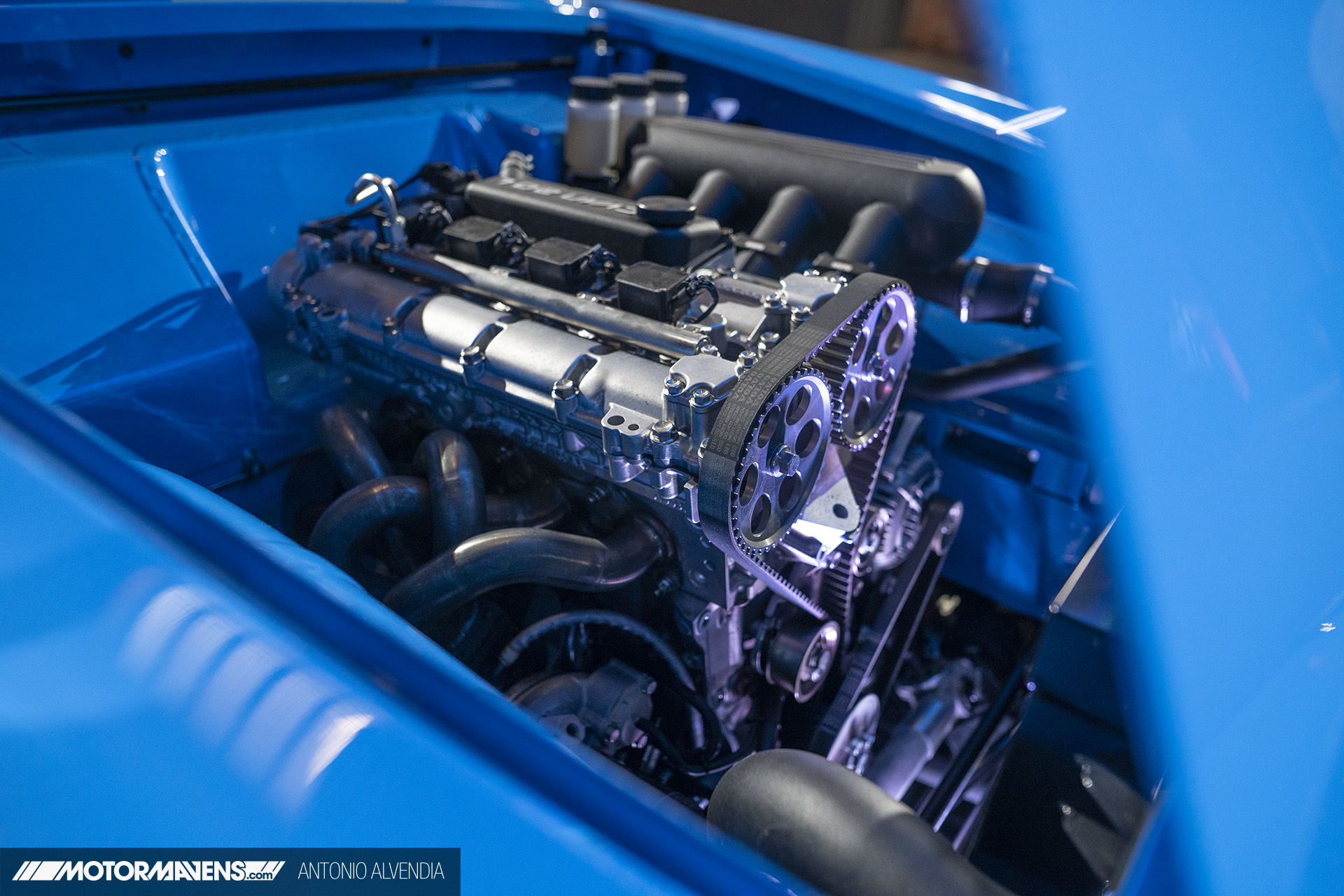 Behold, the Volvo Engine Architecture 4 cylinder 2.0 liter turbocharged 16 valve engine that powers the beast. At 420hp at 7000rpm and 336 lb-ft of torque at 6000rpm, Cyan engineers consider this VEA engine ideal for the P1800 Cyan in terms of compactness and weight. Cyan’s team also has a longstanding history with the VEA, which made its debut in their 2011 Volvo C30 WTCC race car. According to Cyan engineers, this engine was a key part in their winning the 2017 World Touring Car Championship.

One would think that all they had to do is drop one of their race engines into the P1800 and wire it up, but instead, they decided to also increase power throughout the entire rev range. The engine was tuned to deliver a linear power curve, mimicking the driving characteristics of an NA engine, but with significantly increased responsiveness. According to the Cyan team, “the power peaks late. It was designed for high revs, with the torque intuitively linear to throttle pedal input. We learnt from racing that drivers want precise control of the torque.”

A bespoke 5-speed Holinger manual transmission with a dog-leg first gear was installed to again echo the mechanical feeling of the original Volvo P1800, but with a crisp gear change and the ability to handle the torque.

The original P1800’s live rear axle was replaced with Cyan-designed independent rear suspension and a torque-biasing limited-slip differential. Mounted in a Holinger housing, the diff was geared to combine capable performance on the circuit with civilized behavior on the road. 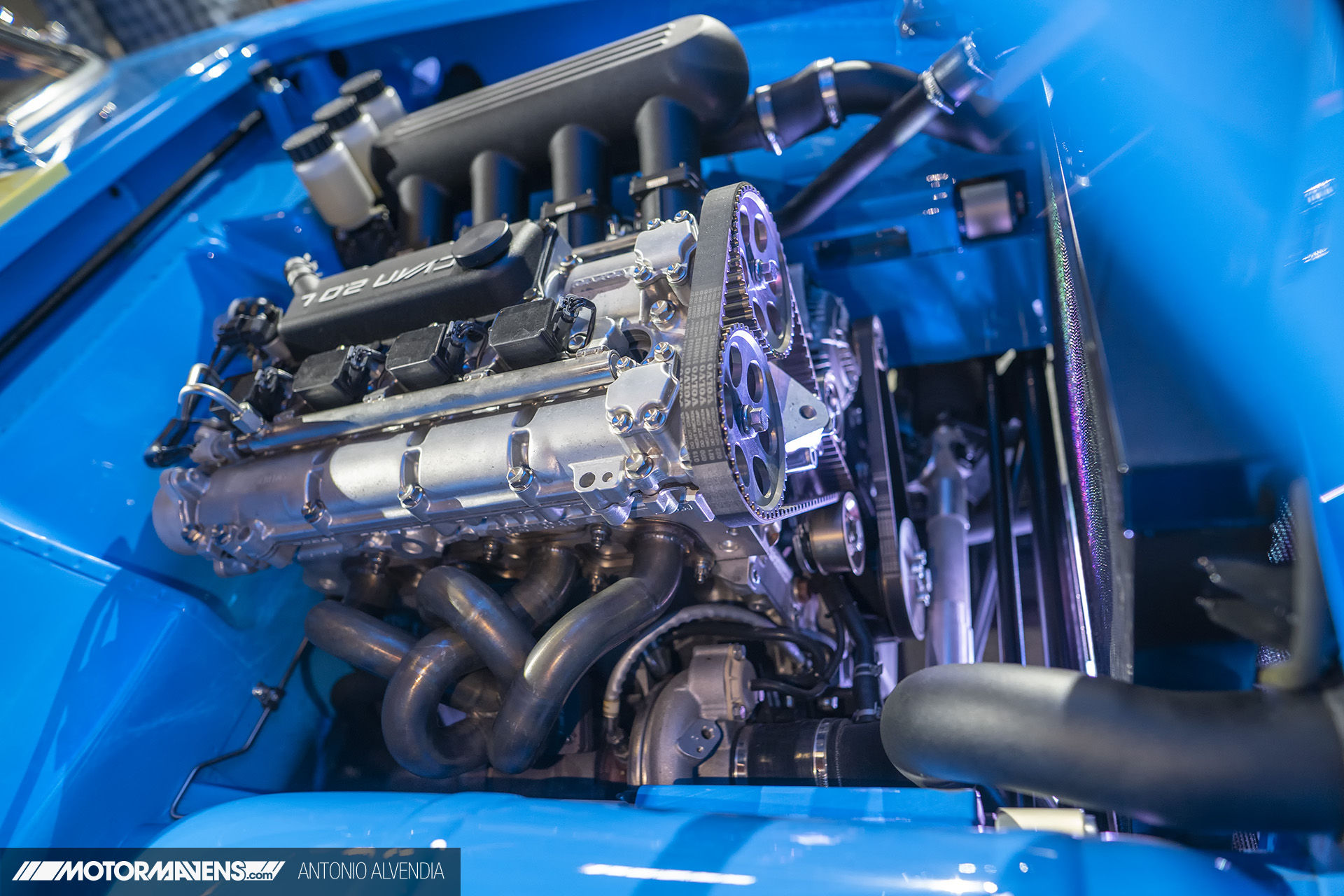 Above, one can see a glimpse of the turbo manifold with the Borg Warner EFR turbo, complete with ceramic ball bearings and gamma-ti turbine wheel for fast spool. This direct injected VEA engine has a 7700 rpm redline; inside, it has 10.2:1 compression forged 82mm pistons, and a crankshaft with 93.2mm stroke. The P1800 Cyan also has a carbon fiber driveshaft for added weight savings and responsive acceleration. It runs a dual-tube stainless steel exhaust with twin catalytic converters before it exits out the rear of car with oval piping. 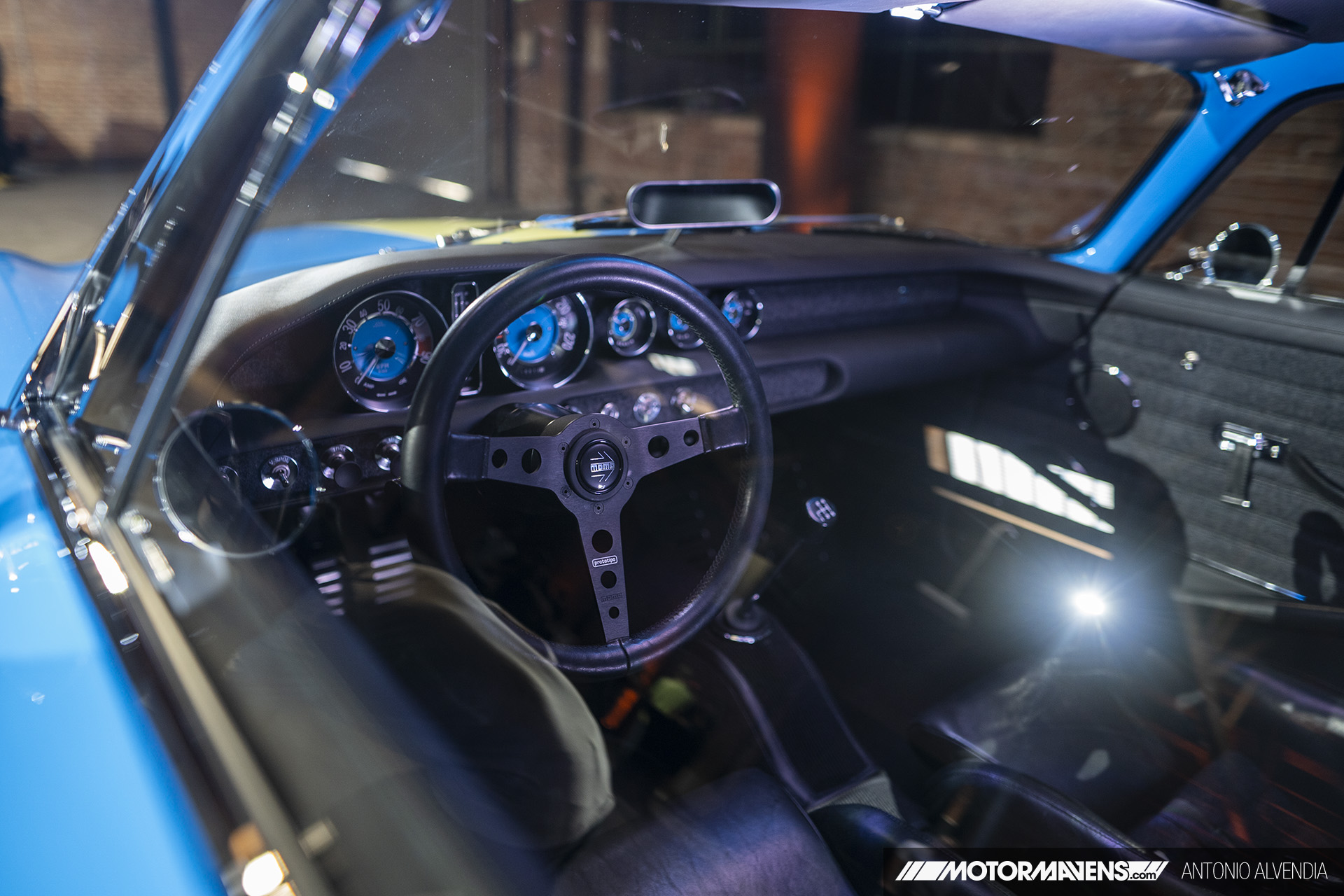 A peek inside the car will reveal a 350mm Momo Prototipo steering wheel, and the vintage looking gear shift lever completely disguises the fact that a high dollar Holinger sits inside the tunnel. I was actually surprised that the Cyan team didn’t make a bespoke Cyan horn button, or a Prototipo with blue contrast stitch… but maybe they’re just trying to keep this part of the car a bit more simple. 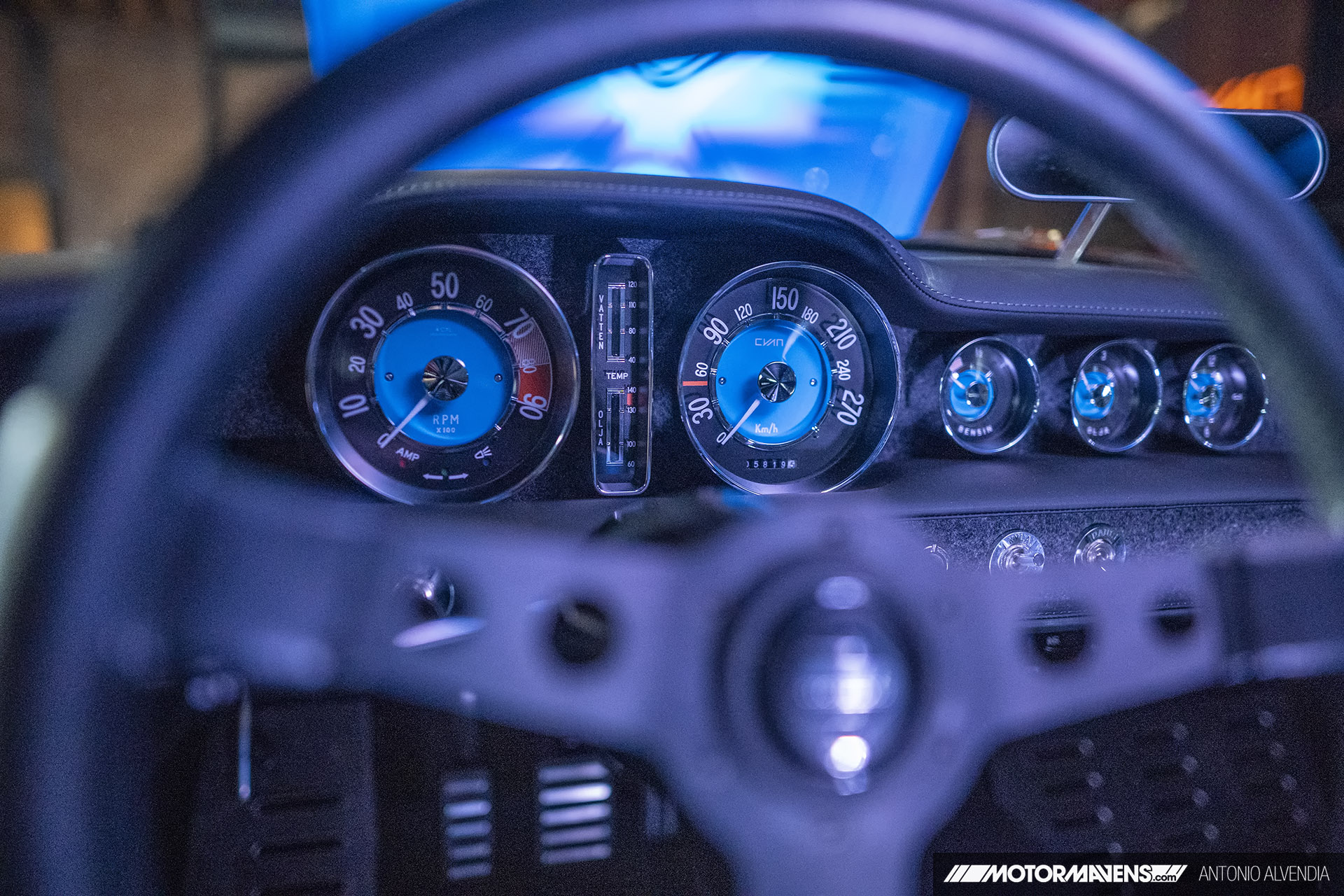 Even though the gauges look old and analog, they are definitely brand new, bespoke gauges made just for the car, with state of the art electronics and sensors behind the scenes. 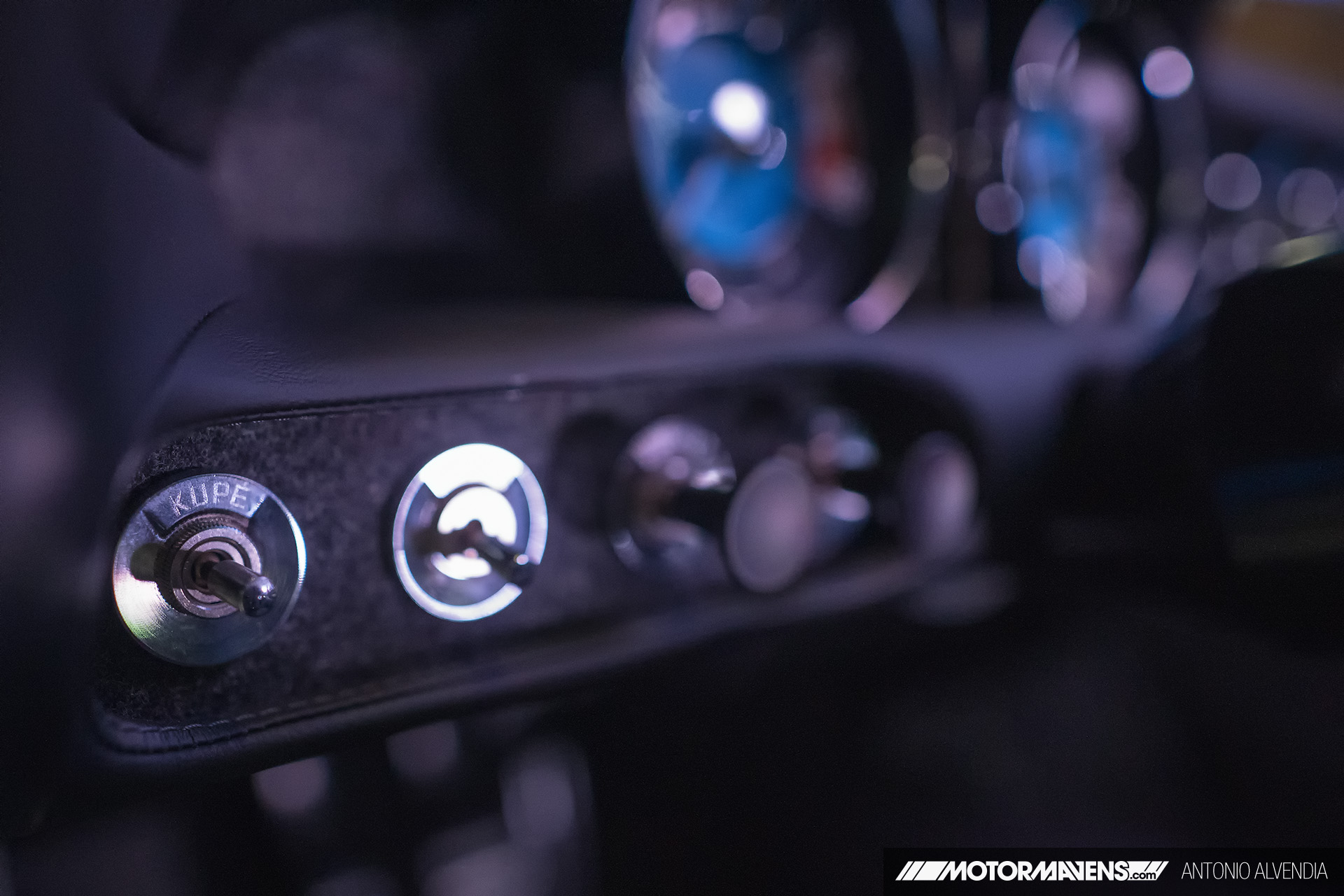 An interesting detail is the fact that the switches on the dash had Swedish words etched onto them. This is a super cool feature, if you know what the words mean. At least they don’t come with Ikea-esque DIY instructions. 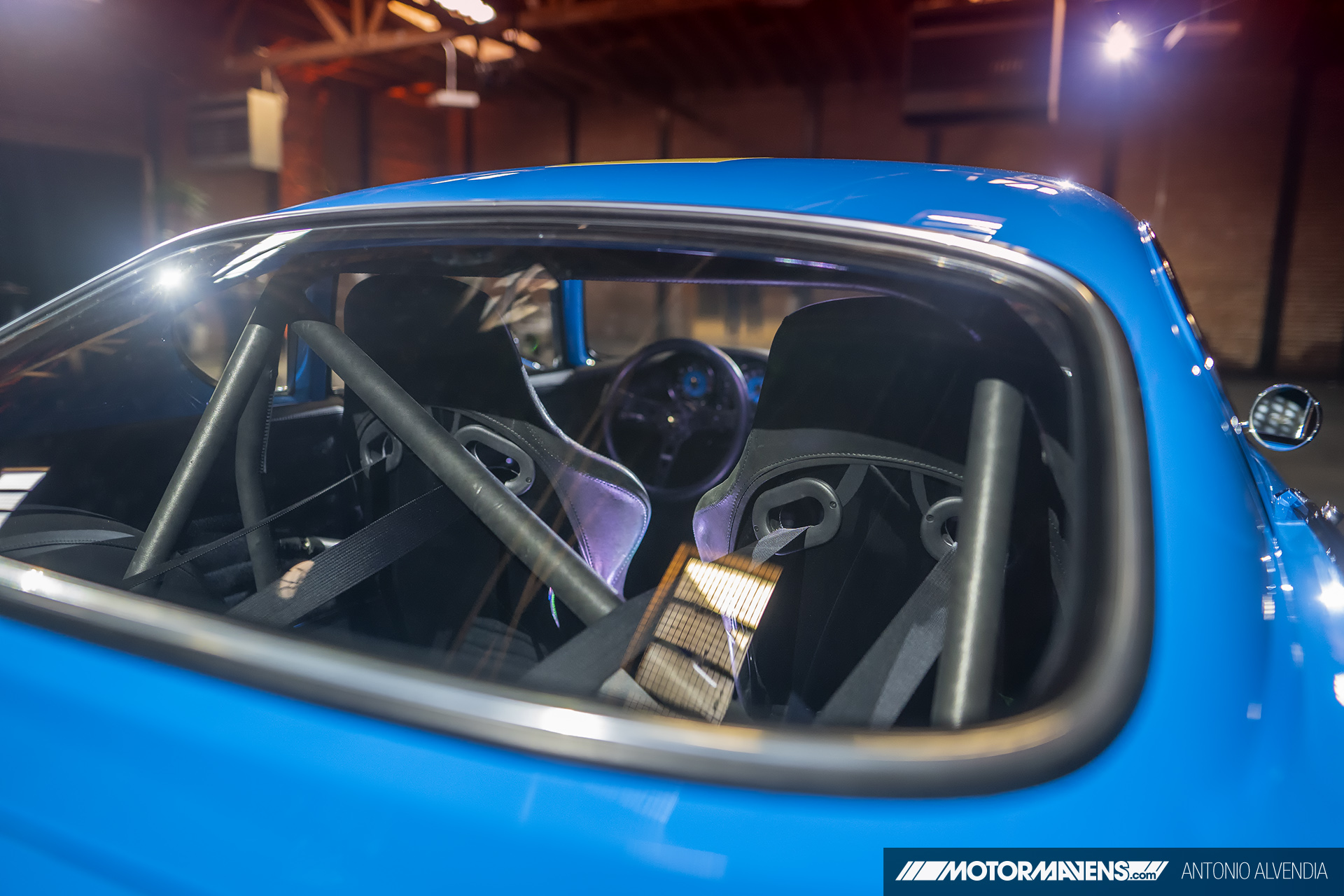 A quick glance into the car will reveal the properly engineered roll cage and Recaro seats that have the Cyan logo stitched into the headrests.

There are A LOT more details I’d like to go over with this car, but I think I’ll just save them for the test drive in my future!

I can’t wait to get behind the wheel of this car!