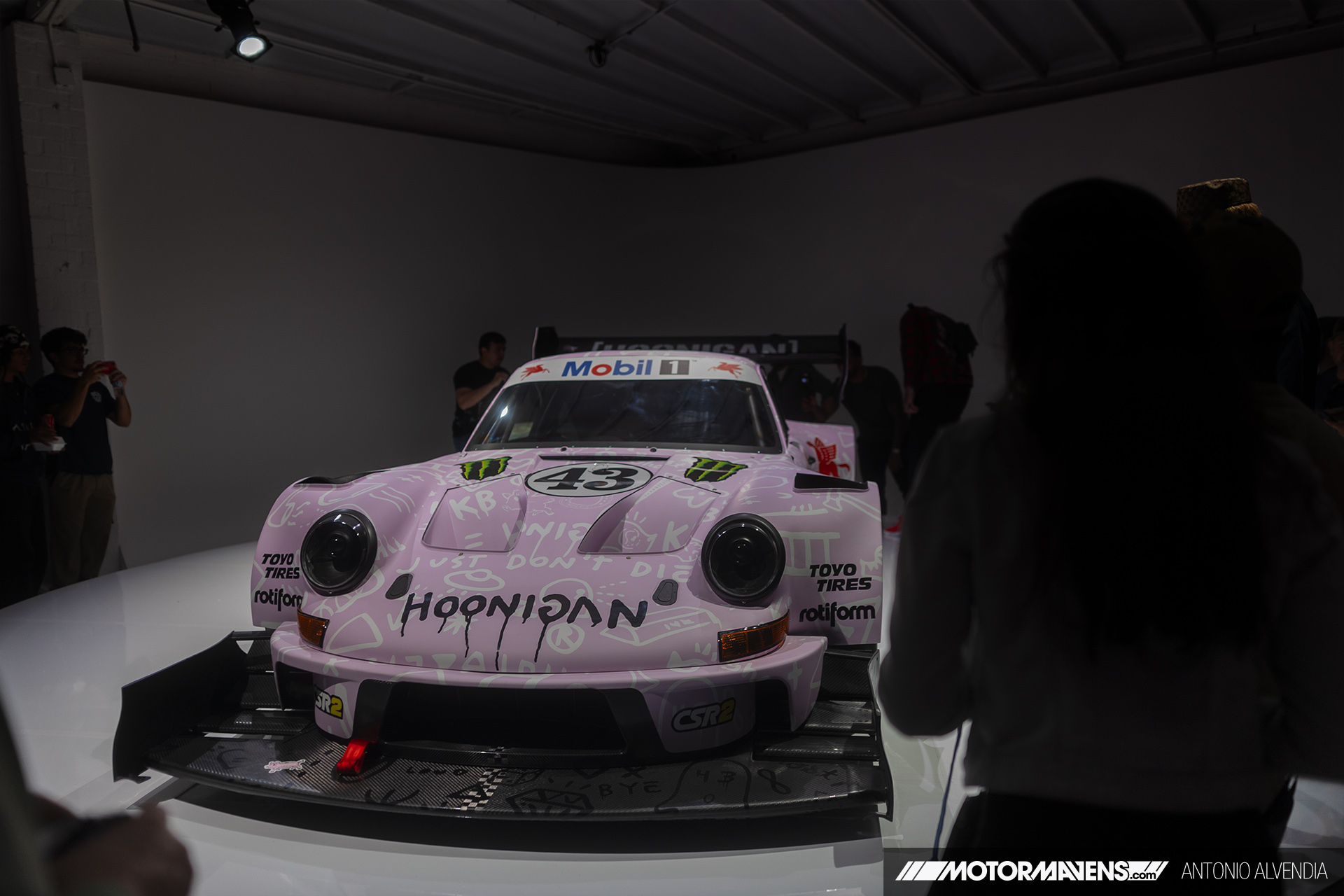 It might be covered in more hypekid street art scribblings than Miami’s Wynwood walls, but Ken Block‘s newly unveiled Porsche 911 SVRSR isn’t like the normal cars you see blowing up your Instagram feed.

Members of the automotive media and selected influencers gathered in the mean streets of Los Angeles last night for a private invite-only event in which Ken Block and the Hoonigan Racing Division of WheelPros today unveiled their next iteration of the “Hoonicorn.” Built by Betim Berisha and his staff at BBi Autosport in partnership with Mobil 1, this new Pike’s Peak International Hill Climb challenger is a 1400hp mid-engine beast, equipped with a Porsche 911 GT3 engine, with highly engineered aerodynamic bodywork by Verus Engineering, a company that built a reputation in the time attack community because of the highly functional aerodynamic modifications they engineer for competition.

I’ll be honest – when I saw the invite to the unveiling of the “Hoonipigasus,” the name they assigned to the car made me roll my eyes. However, when I actually saw it in person, I knew this car was the real deal. 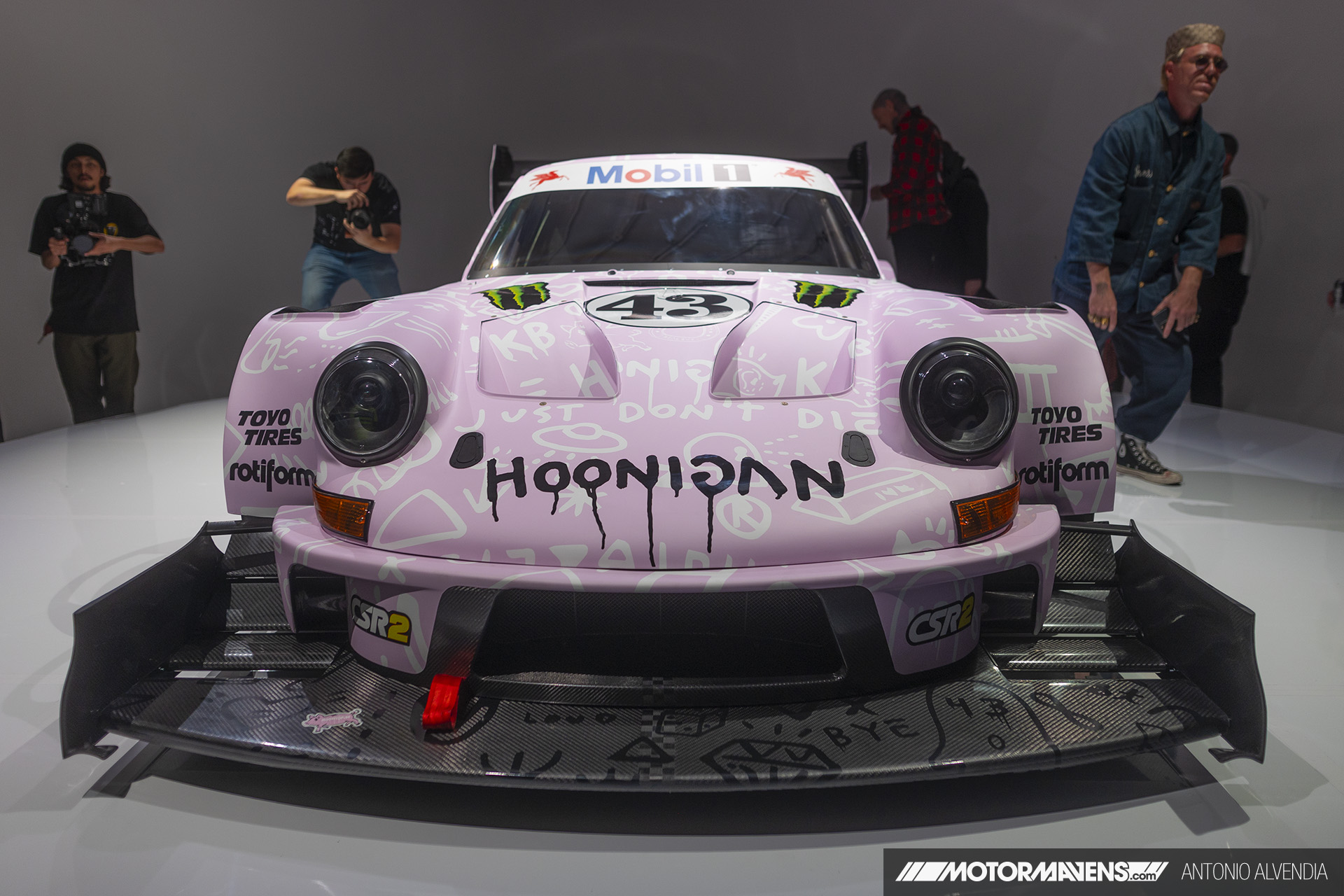 It might have an absolutely ridiculous sounding name, but this Hoonipigasus Porsche 911 SVRSR was built with the sole purpose of going fastest overall at the most iconic and legendary hill climb in the world, Pikes Peak in Colorado.

While most people will likely get caught up in the four-figure horsepower rating, the real sight to behold here is the CFD (computational fluid dynamics) designed aerodynamic engineering on the car. The car weighs less than 2400 lbs, but thanks to the aero engineering, it creates over 5000 lbs of downforce! Five thousand!!!

The giant front carbon fiber front air dam is unlike most carbon lips you see on modified cars. This thing is chassis-mounted, so it’s incredibly strong. In fact, at point in the evening, all of Ken Block’s kids stood on the lip at the same time, and began jumping on it!

The front lip is strong – it cuts through the air with its Formula One-style aerodynamics, scooping up air and routing it above and below the vehicle. This will essentially act like a vacuum, holding the car down to the pavement as Ken Block accelerates his way up past the Devil’s Playground to the top of Pike’s. The center of the front splitter is a tiny bit higher than the outer edges, which are likely to touch the ground under hard cornering as Ken makes his way up the mountain.

Clean air is able to travel through the center area of the splitter to the rear diffuser behind the car, creating more downforce and avoiding the turbulent outer edges near the wheels. 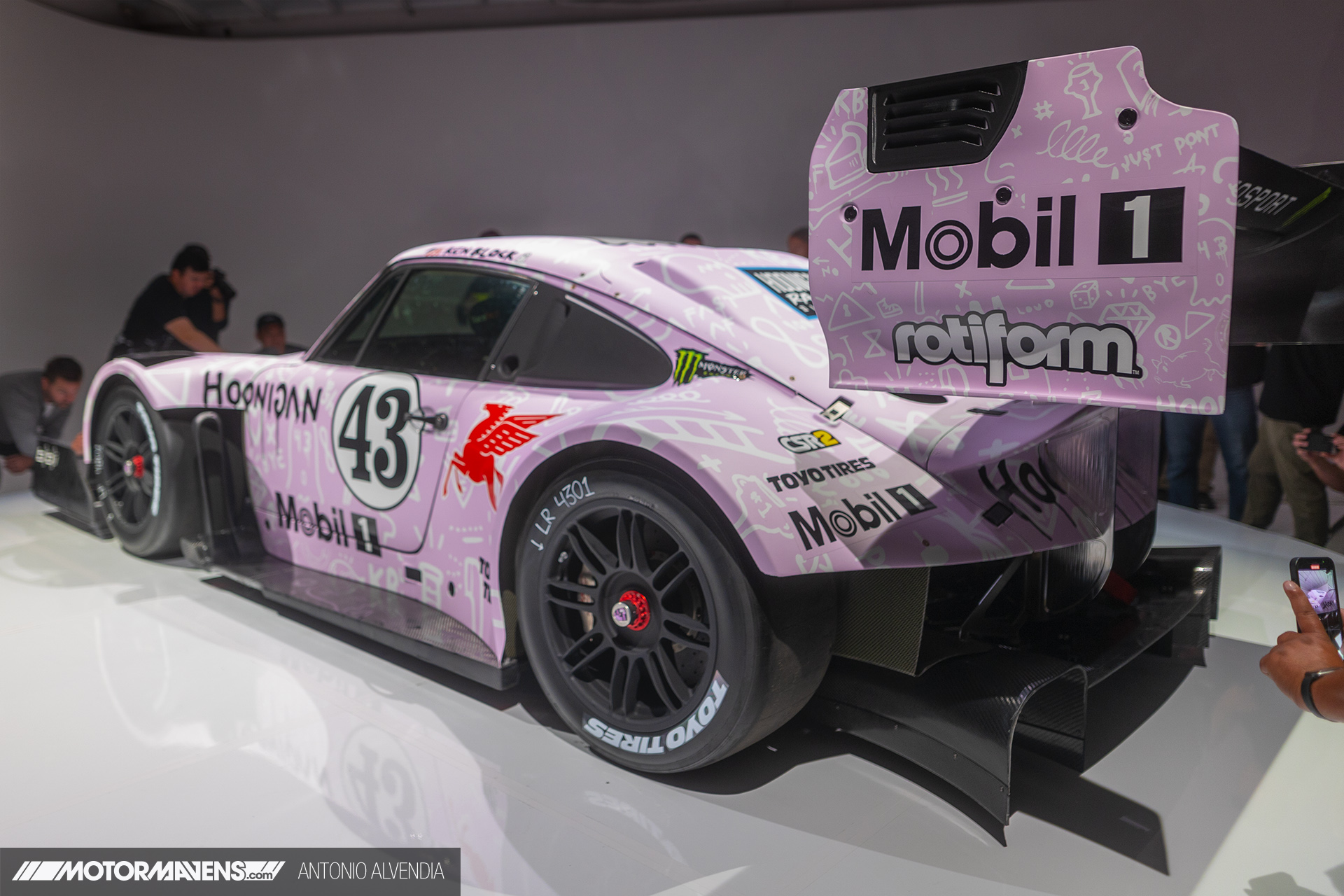 This is something that is most commonly seen on Le Mans cars, but looking back into motorsport history, you could even see the top-of-the-fender cuts to relieve pressure on vintage NASCAR cars, like the Plymouth Super Bird.

Air is further ducted away behind the front wheels by the giant upside-down U-shaped arches on the rear of the fender, onto the giant carbon fiber sideskirts to provide even more downforce.

Anyone looking at the rear quarter panels of the car will notice the iconic red Mobil 1 pegasus on the livery. As the winningest motor oil brand on Pike’s Peak, Mobil 1 is the official motor oil partner for this build, and will be providing engineering and technology support for fuels and lubricants, leaning on the Mobil 1 team’s expertise and personnel supporting their championship-winning efforts in Formula 1.

At the top of the rear wing’s endplates, you can even notice F1-style vortex generators to control the airflow on the wing tips and relieve the high pressure zone on the sides of the GT wing. It would be really interesting if you could actually see the displaced air on the wing tips, similar to how you can see it on F1 cars as they charge down the racetrack. 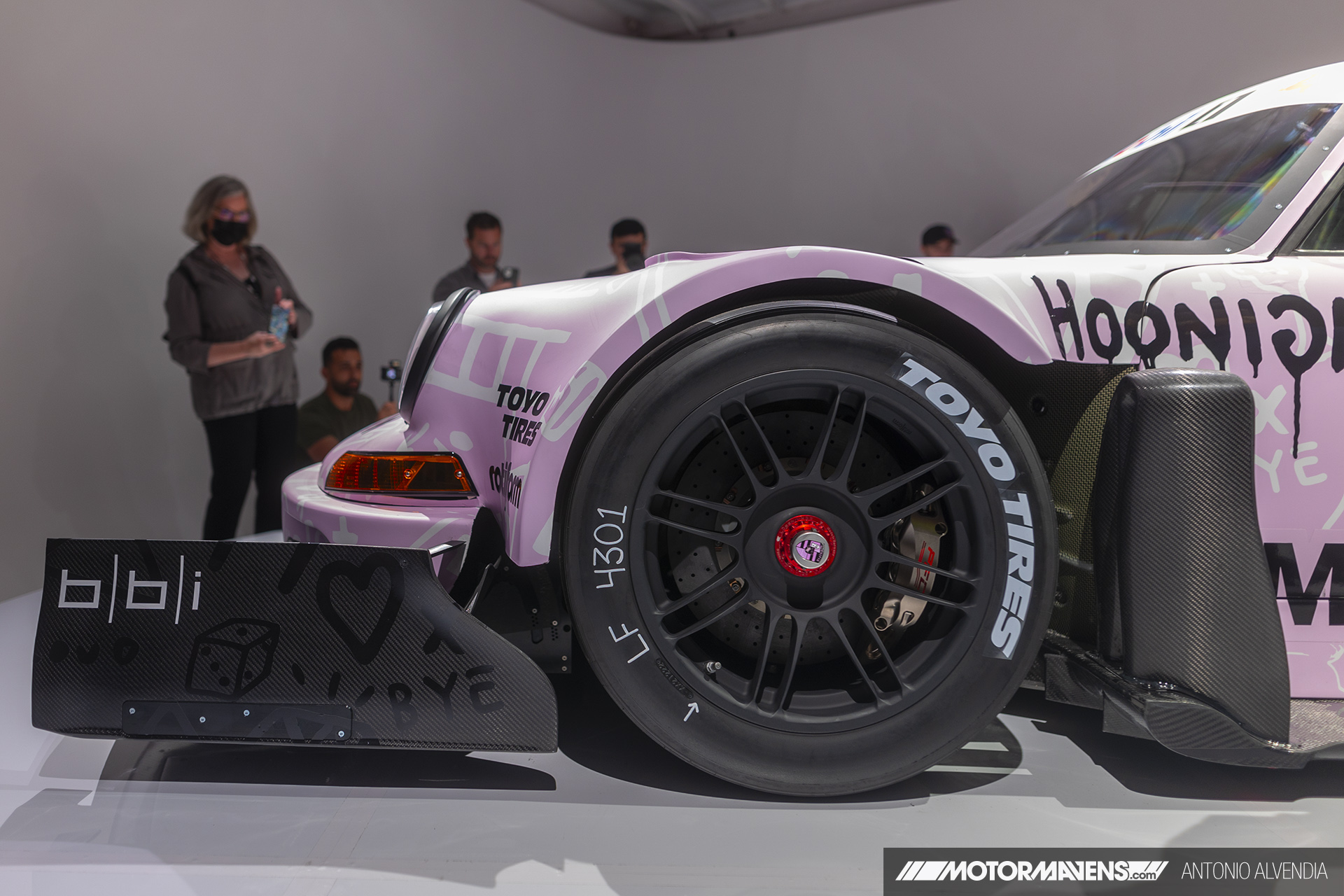 The aerodynamic engineering on the car is amazing and fully functional – from the ginormous dry carbon fiber front splitter to the underbody transmission tunnel (they apparently call it the “Chorizo Tunnel”) that goes from shoulder height down to the front axle, resulting in an insanely low center of gravity.

Even behind the front wheels, you can see the carbon kevlar aero grooves inside the wheelwell to further route air away from the low pressure zone towards the vertical carbon ducts at the front of the sideskirts. Underneath the sideskirts are even more aero channels to further manage the airflow underneath the car. All these details are the secret sauce that will make this 911 into a potent weapon for climbing Pike’s.

Weighing just 1,000kg, the machine features GPS Height-adjusted suspension based on telemetry notes from the previous year’s Pike’s Peak race. This year, the car will be competing in the PPO (Pikes Peak Open) class with hopes of adding an overall victory to BBi’s 8 podiums with 5 class wins at the PPIHC. 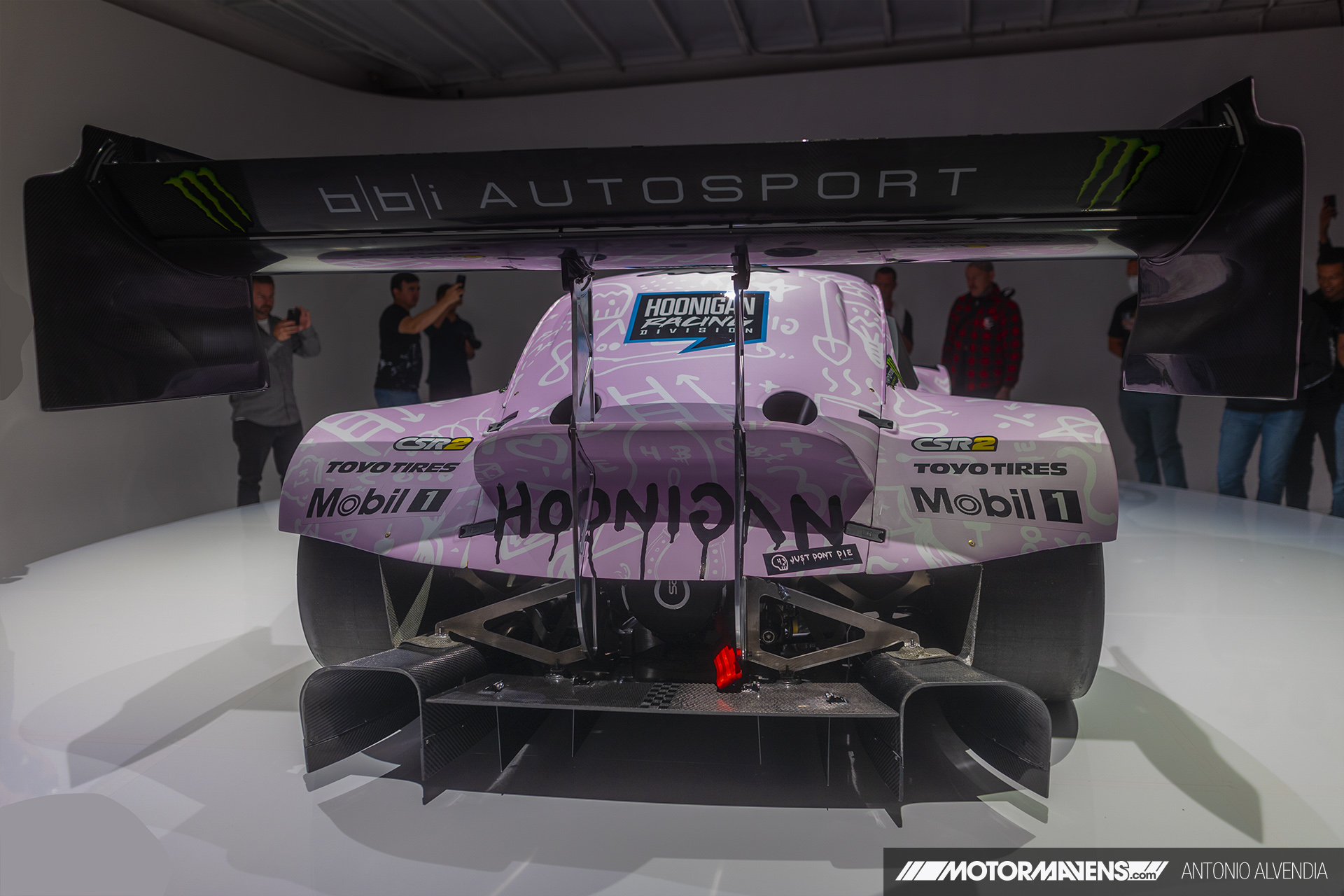 Check out the giant CNC-cut forged aluminum chassis mounted uprights for the GT wing – they’re massive! My friend Zach Mallin from ZSM Custom observed that above the rear ducktail wing, the rear trailing edge of these aluminum uprights are tapered like an airplane wing. However, under the deck lid (below the ducktail), they’re normal and square.

It’s interesting to see that the inner and outer radii on the rear splitter are different shapes too. The inner radius is closer to a 90 degree bend, whereas the outer radius is more curved, like the arc of a compass. 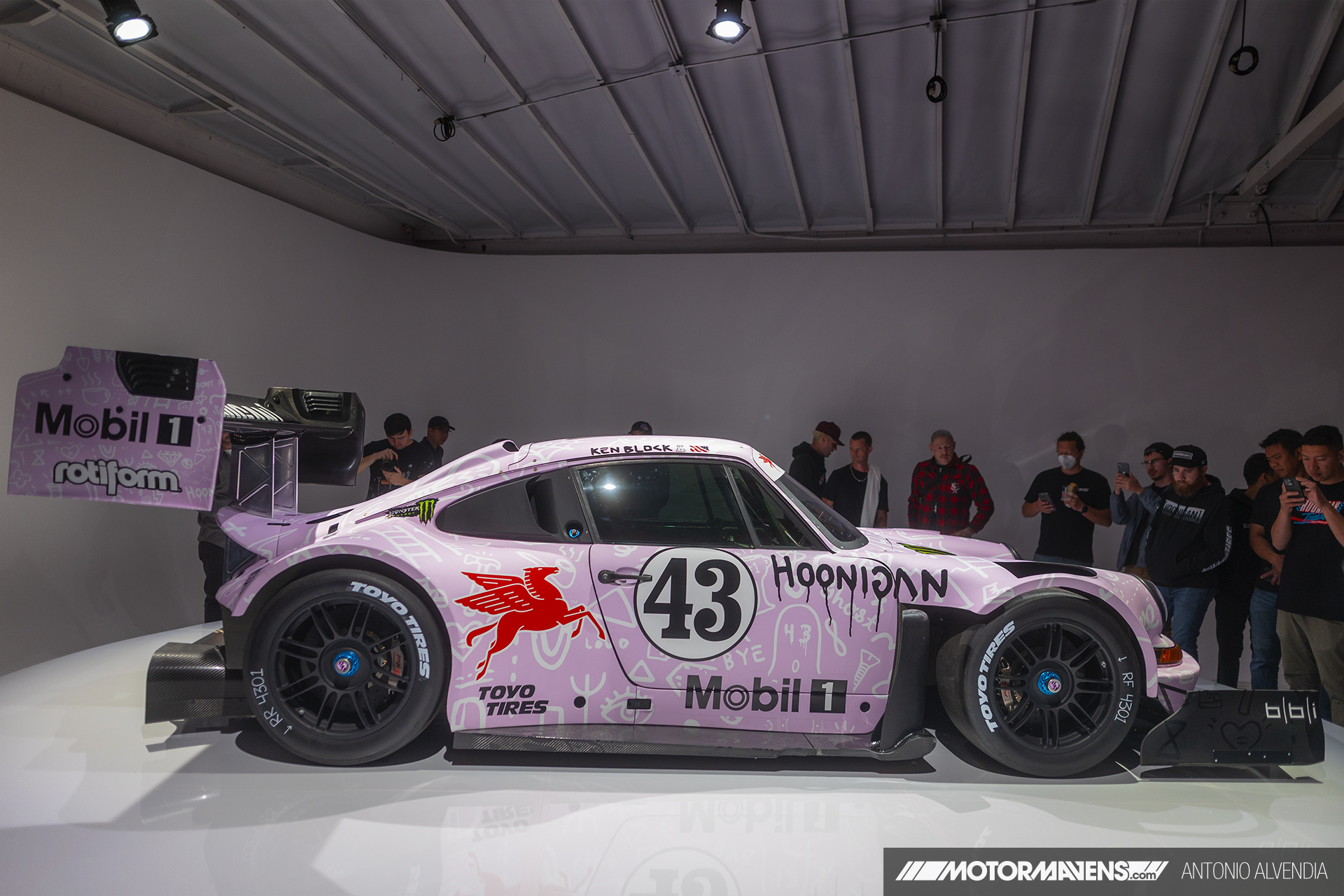 The livery on the car is a collaboration between Block and former Olympic snowboarder, musician, and internationally acclaimed street artist Trouble (Trevor) Andrew, a.k.a. Guccighost. At the reveal, Trouble Andrew told the audience he chose pink because he loves how the color shows up. The livery pays homage to one of the most iconic racing Porsches in history, the Porsche 917/20 “Pink Pig.”

The Pikes Peak International Hill Climb, also known as The Race to the Clouds, is an invitation-only automobile hill climb to the summit of Pikes Peak in Colorado. This year’s event, scheduled for Sunday, June 26, will mark the 100th running of the PPIHC, which features a 12.42-mile course with 156 turns and an elevation gain of 4,725 feet, rising to the finish line at 14,115 feet above sea level.