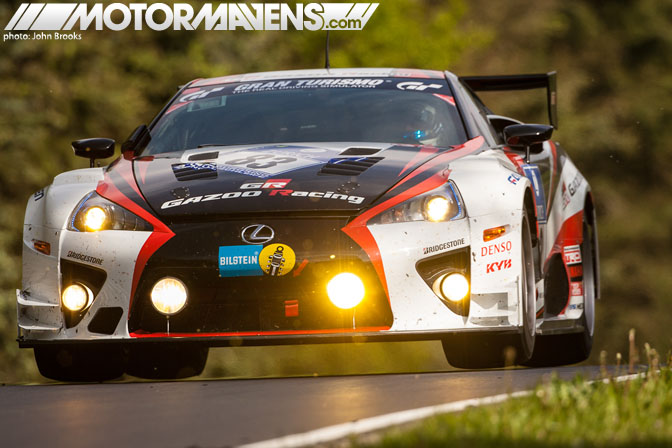 Have you ever seen a Lexus LF-A take flight with all four wheels off the ground? As Gazoo Racing Lexus LF-A driver Akira Iida explains it, “The momentum of our team is very good. Our target for the 24 Hours Nürburgring race is to maintain a steady pace.” As many Lexus and Toyota fans already know, the Gazoo Racing team did a lot better than just maintain a steady pace at The Green Hell – the Gazoo Lexus LFA team and the Toyota Swiss Racing GT86 team took top honors in their classes – SP8 and SP3 respectively.

This isn’t the Lexus LFA’s first trip through the Green Hell, however. While several of its past Nurburgring efforts proved unsuccessful, Toyota’s luxury marque is committed to making a name for itself at the 24 hour endurance race by winning trophy after trophy. Competing in the SP8 Class, the Gazoo Racing Lexus LFA topped the podium and finished an impressive 15th overall. 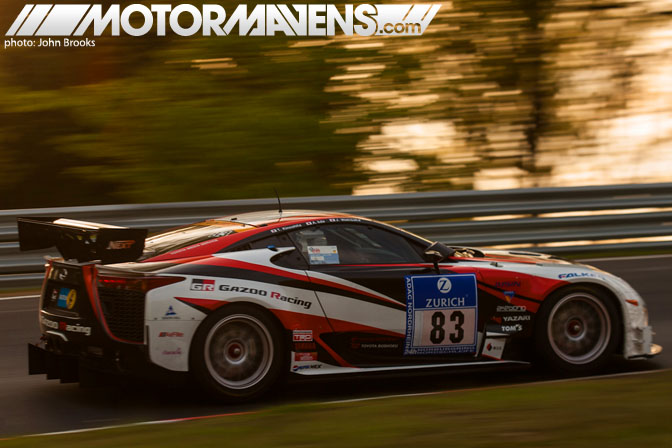 We received this awesome photo set of Nur-Spec Lexus LF-A and Toyota GT86 photos from our longtime friend and new contributor from Europe, John Brooks. Seeing panned action shots of the LF-A with the sun setting in the background creates the type of visual drama that one only associates with a master lensman of Brooksie’s caliber. Outstanding. 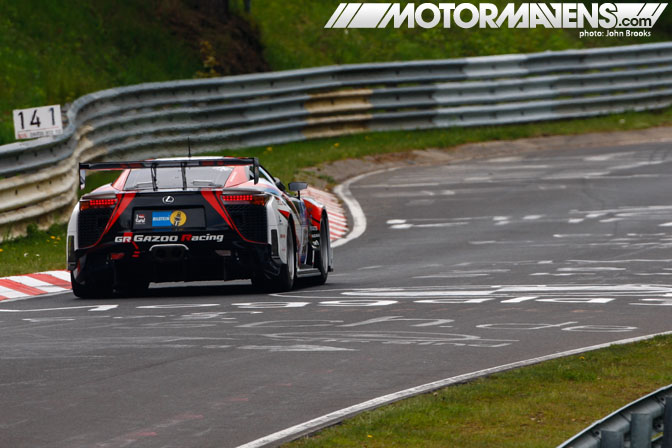 Those who follow Japan’s Super GT series might recognize the drivers’ names above the door of the car. Juichi Wakisaka, Takayuki Kinoshita, and Akira Iida are all well-known GT500 drivers in Japan. All three drivers previously competed in GT500 Toyota Supras, and Akira Iida is also well known by car enthusiasts from his days as an AE86 driver!

You really MUST watch this video, for no other reason than to listen to the SOUND of the Gazoo LFA Nurburgring car. 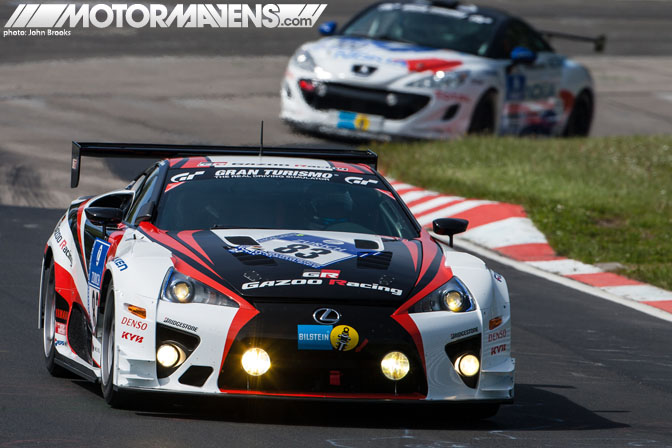 The Gazoo Racing Lexus LF-A looks so menacing on the track! With its body clad in red, white, and black, with lights glaring at its opponents, the LF-A looks as if it’s an angry samurai out for blood, with its face covered with a traditional Japanese warrior’s mask.

For those who have never had the opportunity of seeing it firsthand, here’s a video that shows the Gazoo LF-A team performing a pit stop and driver change. 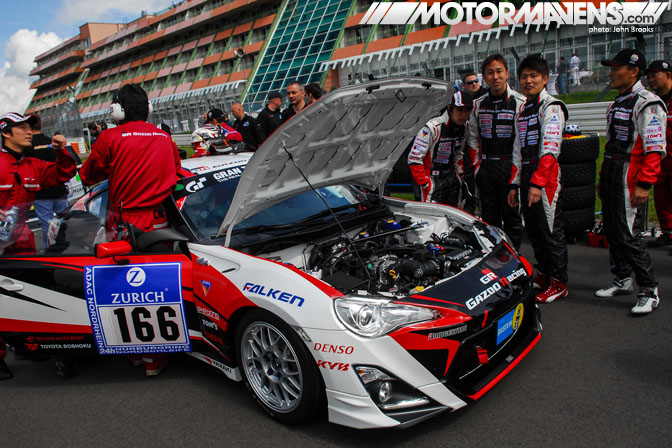 The LF-A wasn’t the only Toyota-based entry at the Nurburgring 24. The Toyota Swiss Racing team fielded a pair of new GT86 race cars, prepared by Toyota Motorsport. Both took part in the competition class (V3) for production models. Their participation is part of Toyota Switzerland’s GT86 grassroots motorsports program, which encourages a new generation of car enthusiasts to get behind the wheel and drive! 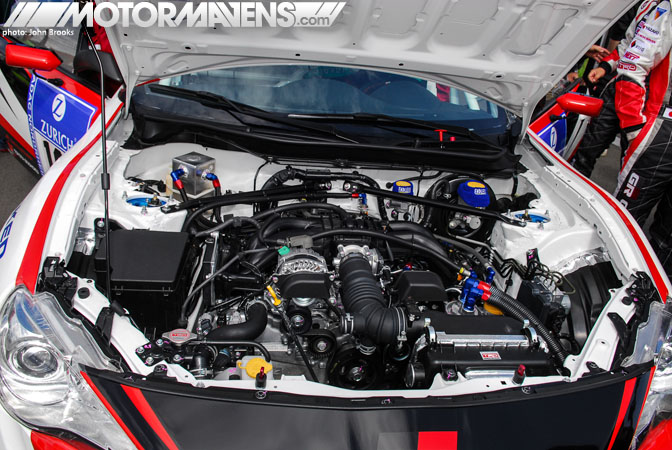 The engine bay of this GT86 looks pretty stock from a quick glance. As for the Toyota GT86 team, car number 166 placed first in the SP3 class and 46th overall, with the second car placing sixth in class and 65th overall. In addition, another Toyota GT86 from Toyota Swiss Racing managed a 78th place finish and first overall in the V3 class for stock vehicles. 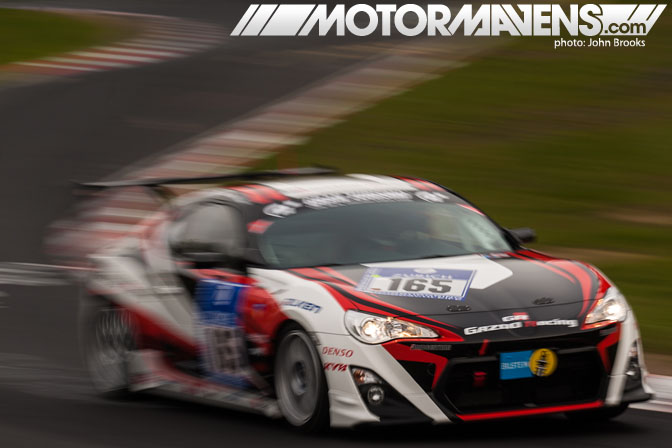 On the track, the GT86 looks just as angry as it’s big brother, the LF-A. 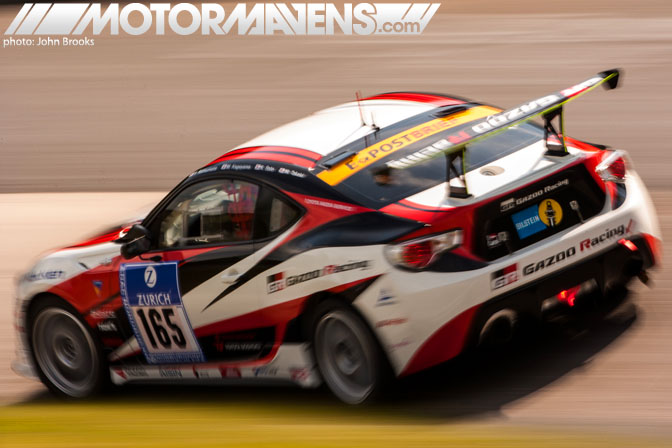 Toyota’s efforts in racing the GT86 are great, and a win at the legendary Nurburgring 24 is a perfect jumpoff point for marketing the car to the motorsports community. I wonder how the European car community is going to take to the car once it becomes readily available in dealerships… 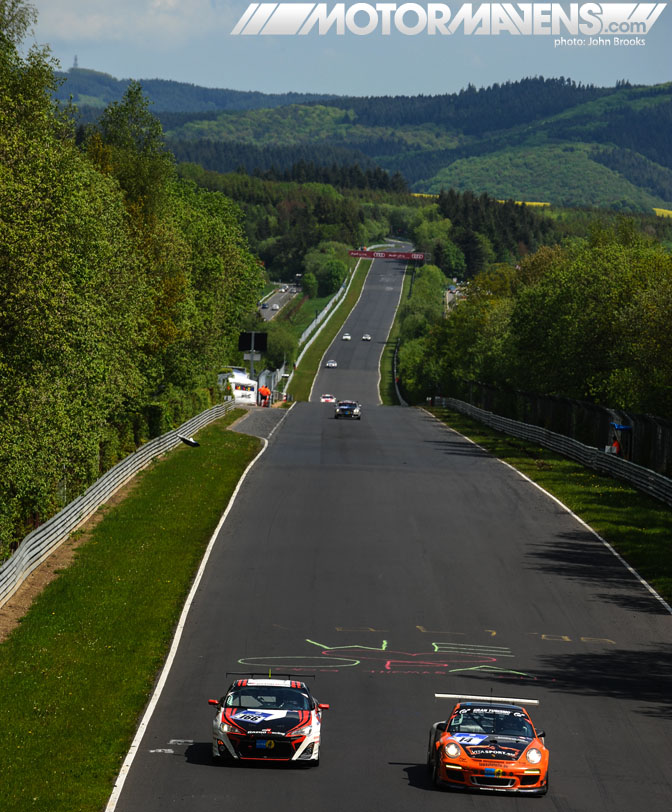 A Toyota GT86 side by side with a Porsche 911?! I guess you really do see all sorts of things at the Nordschleife. Thanks to John Brooks for these great photos!