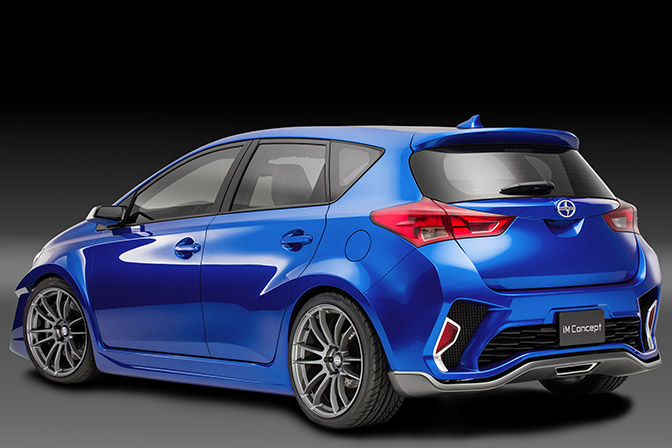 The Scion iM is here! The lowercase i, uppercase M is an ALL NEW CAR for the US market. From the looks of the concept renderings, it’s a front wheel drive, four cylinder, four door hatchback (or five-door, depending on your school of car terminology) with European compact styling. We just posted up photos of Scion’s new iM on the @MOTORMAVENS Instagram feed, and it has been getting mixed reviews from our audience… but we like it!

According to our good friend Jeff Lushe of compact car modding specialist Micro Image, the new Scion iM is basically same thing as the Toyota Corolla Auris, which was already released in Japan a few years ago. 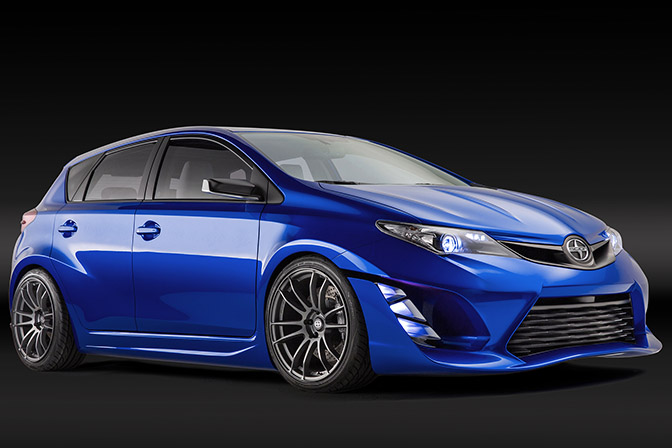 Some people think the iM looks a bit like the Lexus CT200h – but actually we think the exterior of the iM looks better than the CT200h. Obviously, the Lexus interior is going to be light years ahead of the iM in terms of luxury, but when it comes to exterior styling, we think the iM looks pretty good for what it is! We liked the new exterior style of the 2014 Corolla sedan, but we like the Scion iM’s exterior even more. Let’s face it – it doesn’t have the awesome front engine, rear wheel drive drivetrain that makes us love the Scion FR-S, but when it comes to economy-minded front wheel drive vehicles, the iM is aesthetically pleasing in our eyes.

The rear end looks so European – we can imagine this thing double parked on the cobblestoned streets of Madrid in front of our favorite food spot, the Mercado de San Miguel. Oh wait – we actually have seen the iM’s Toyota Auris counterpart in Madrid. And in Paris as well. Seems legit. If it’s good enough for cities like Madrid and Paris (and its hometown of Nagoya Japan, of course), then the Scion iM will be right at home here in Southern California.

We can’t wait to see what it would look like lowered, with aggressive fitting wheels on it… and an engine upgrade! The real question is… if we had a Scion iM in our garage, should we turbocharge the stock engine it comes with? OR should we just swap in another front wheel drive Toyota powerplant that already builds power, with high revving capability? How about the 2ZZGE Yamaha engine and 6-speed transmission from the ZZT231 Celica GT-S and Matrix XRS? Hmmm….

Oh well. Here’s the official word from Scion, below.

TORRANCE, Calif., Nov. 12, 2014 – Whether it’s exploring the mountains or playing at the beach, Los Angeles offers adventures off every freeway. Young people just need a vehicle to get them, and all their gear, to their destination in style. The new Scion iM Concept car is designed with that in mind and will debut on Wednesday, November 19 at the Los Angeles Auto Show.

The iM Concept is a five-door compact hatchback with sporty looks inspired by those seen on the European touring car racing circuit. The concept brings in captivating styling with edgy, geometric grille inserts, deep air intakes and fog lights. The custom-blended “Incrediblue” paint is complemented by matte silver and gunmetal accents.

To create a grounded appearance ready for the road, the iM Concept has wide aerodynamics and a lower ride height. The performance inspiration carries through into the 19-inch forged alloy wheels and sporty performance tires. Vented front rotors and 4-piston calipers work with the adjustable height racing suspension to complete the racecar-influenced design.

“The tastes of today’s younger buyers have evolved. They want a car that provides excitement and individuality, as well as the comfort, technology and reliability that Scion offers,” said Scion Vice President Doug Murtha. “The iM Concept combines sleek styling with the versatility of a modern hatchback to catch the eye of Scion customers. Stay tuned for more on how we will bring this vision to the road.”

Scion’s press conference will be held at 3:40 p.m. on Wednesday, November 19 at Scion’s display in the South Hall. To follow Scion news at the LA Auto Show use the hashtag #iMDriven or visit http://www.scion.com/blog. 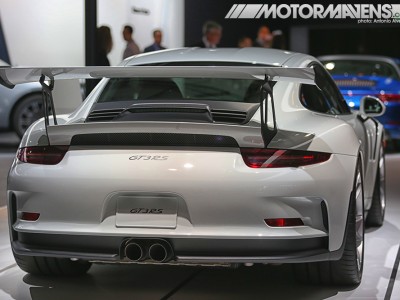