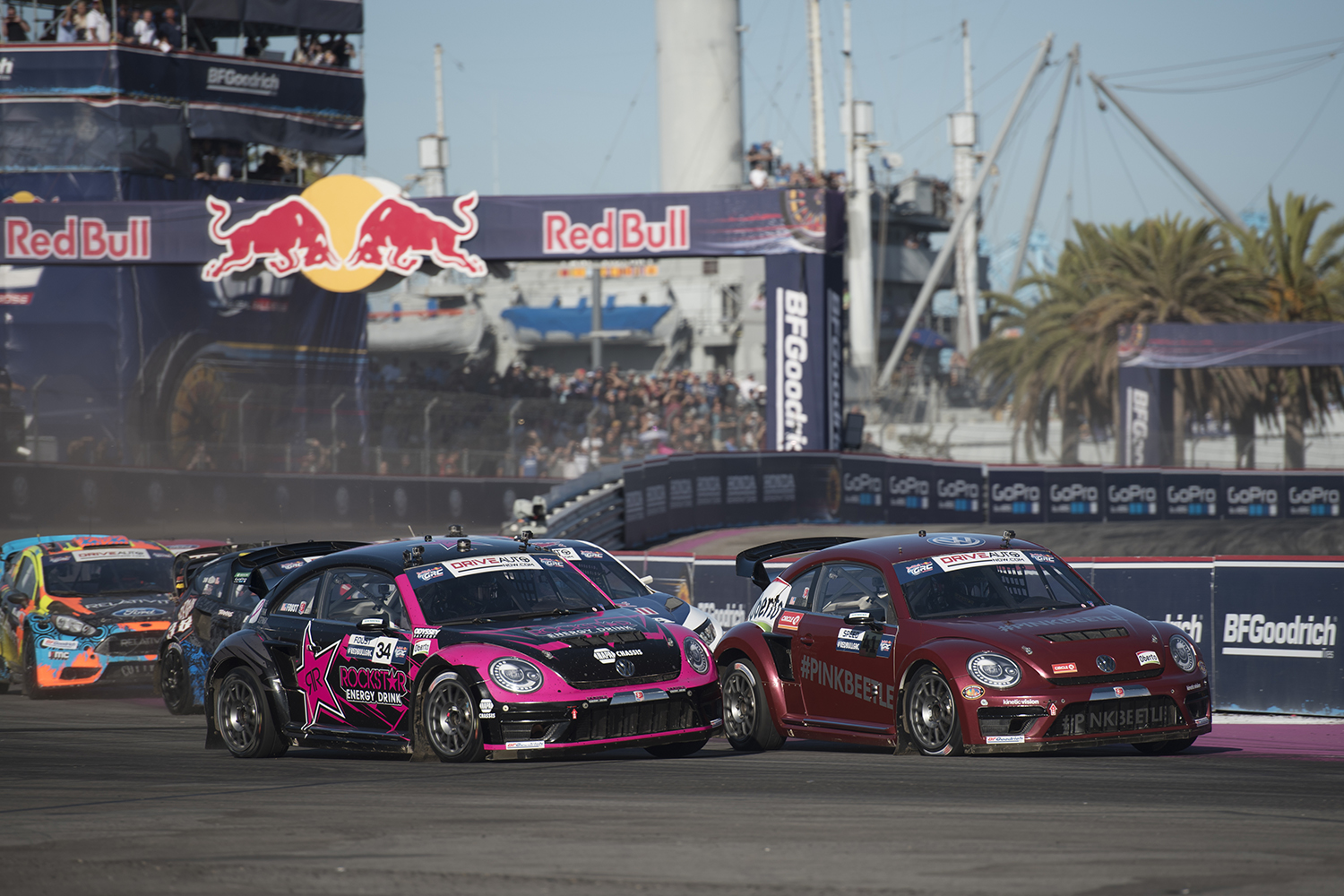 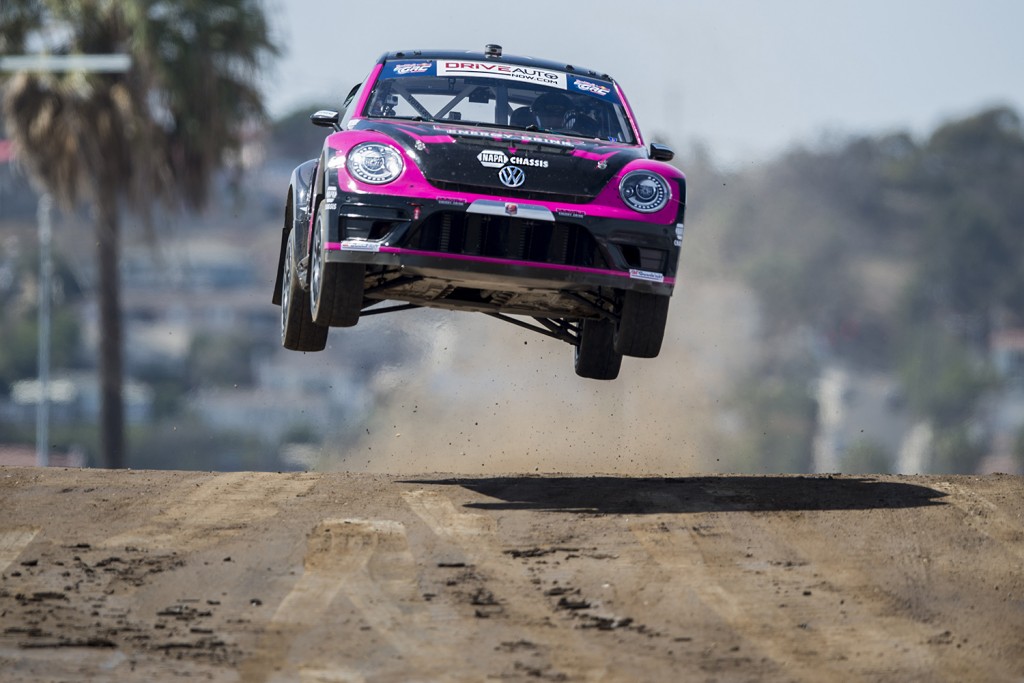 Tanner Foust entered the weekend with a slim, 13-point margin in the championship standings over his teammate. 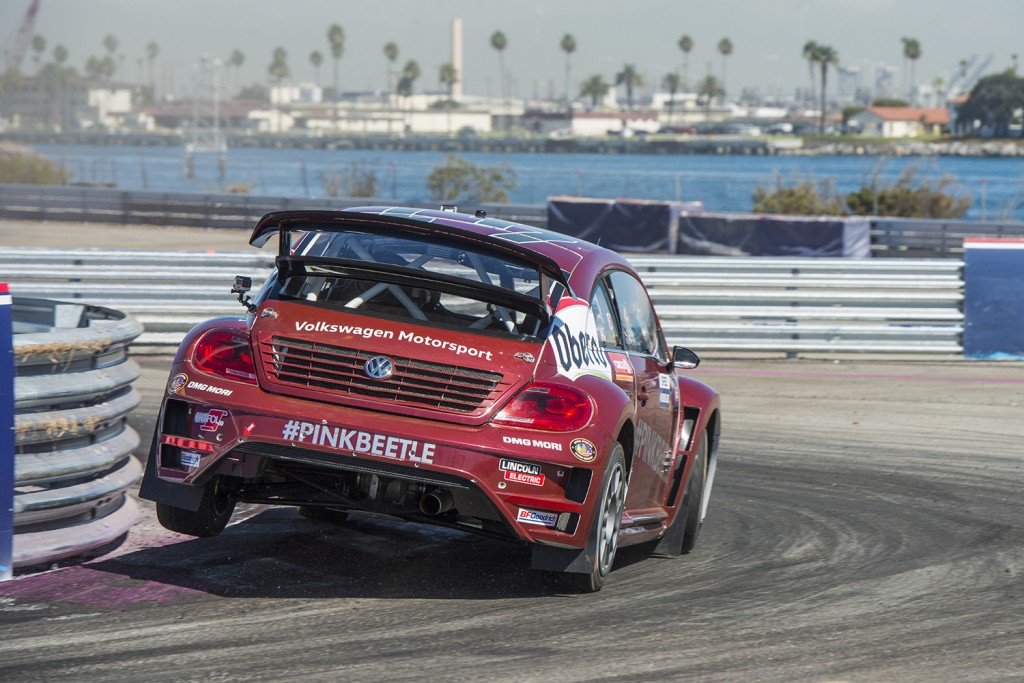 Scott Speed started the weekend well, setting the fastest time in qualifying and winning each of his Heat and Semifinal races. Foust ran into more trouble, qualifying fourth and finishing second in his Heat races, ending a streak of 25 consecutive preliminary race victories. Foust won his Semifinal and earned a second-place starting position for Saturday’s Final, next to his teammate. 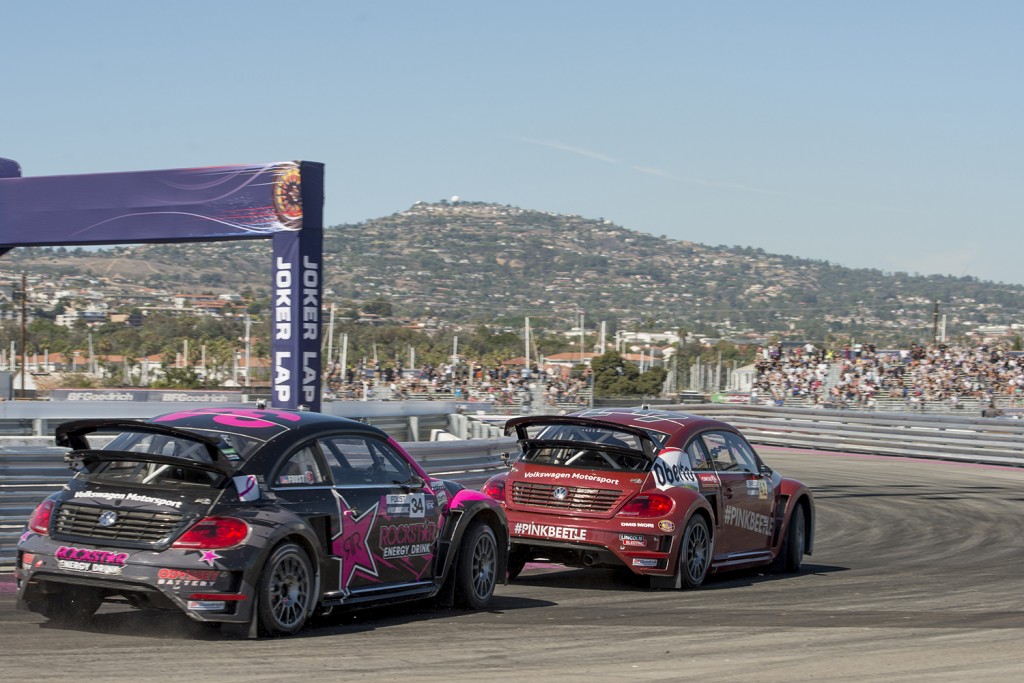 Saturday’s Final went to plan, with both Volkswagen Andretti Rallycross drivers launching away from the field. Scott Speed took his fourth victory of the season and Tanner Foust grabbed second place in the team’s fourth double podium finish, as well as its third 1-2 sweep of the year.

Sunday was more difficult for the Volkswagen Andretti Rallycross pair. Foust qualified second and Speed turned the fourth fastest time in the session. Both drivers started in the same Heat, and Foust led Speed to the checkered flag. Speed made a last-lap pass in his Semifinal race to take the win, setting up a top starting position for the Final. Foust ran into trouble in his Semifinal, and was pushed out of the lead at Turn 1. He fought back to a third-place finish, but was issued a penalty and relegated to fourth place, forcing him to the Last Chance Qualifier.

Foust prevailed in the LCQ, earning a spot in the last Final of the season. Now separated by four points, whoever finished ahead of the other would end up winning the Driver’s Championship. 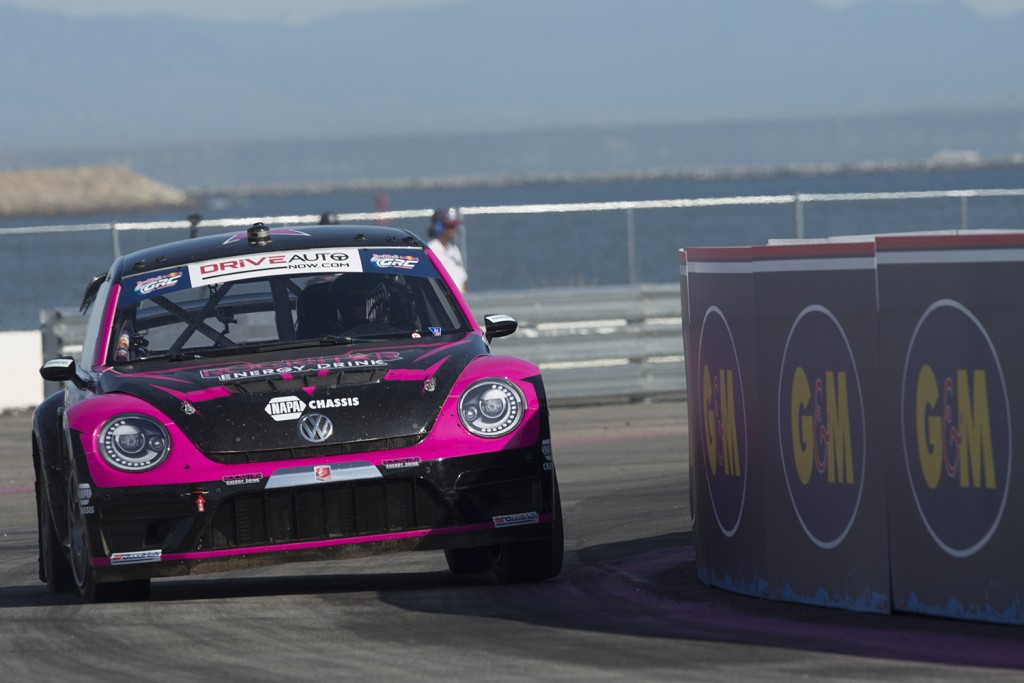 Foust had a monster start and passed nearly half the field on the outside of the first few turns, ending up in third position behind his teammate. Speed held position in second, maintaining a small gap to Foust. Although Foust remained close to Speed throughout the race, he was unable to pass the driver of the No. 41 #PinkBeetle GRC, allowing Speed to claim second place and the Championship victory. 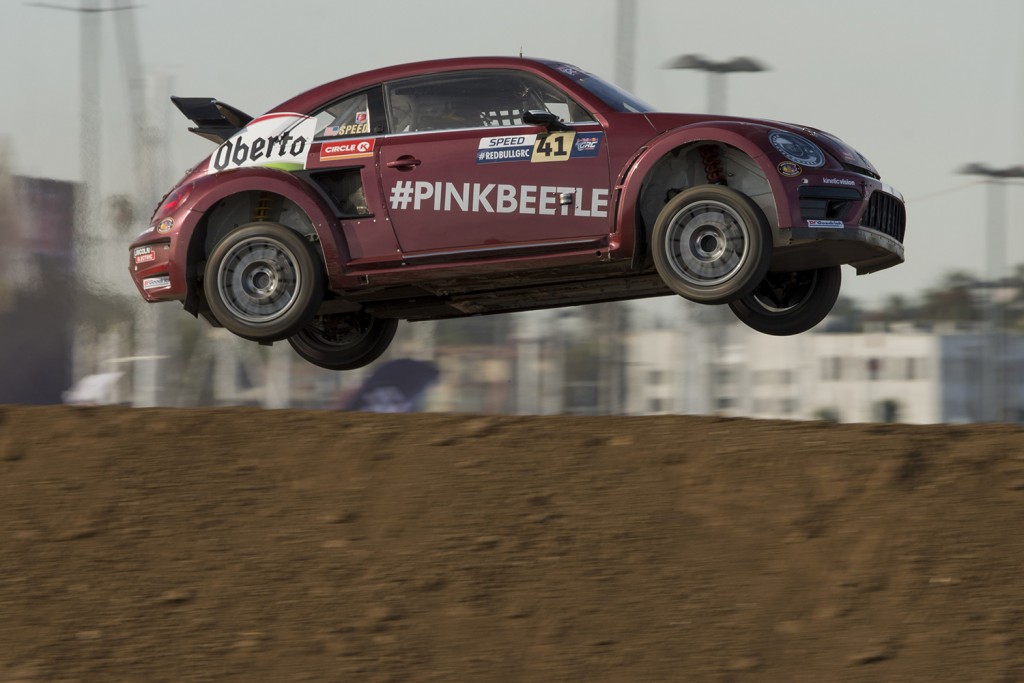 “Today was the most emotional day of racing in my entire career,” said Speed after earning his second consecutive Driver’s Championship with Volkswagen Andretti Rallycross. “I expected to come out and run at the front without problems today, but had some troubles in qualifying. After racing in the same Heat with Tanner, with him winning, I thought our chances were done, but then he ran into his own issues, so the championship was in our hands going into the final. This is the culmination of so much hard work from everyone on the team this year and I couldn’t be prouder to stand on the podium with everyone.”

Foust’s second-place finish in the championship bettered his third-place effort in 2015. His streak of 25 preliminary race wins in 2016 set a new record, and he added four victories to his Red Bull GRC total this season.

“I’m gutted for our team with this result,” said the driver of the No. 34 Rockstar Energy Drink Beetle GRC after the race. “We started the day leading the points, but events outside our control put us in a hole. I put everything I had into that Final and we came up just one or two points shy. Everyone’s worked so hard this year:  I’m very proud of the team, but wanted to get my guys to the top step of the podium today.” 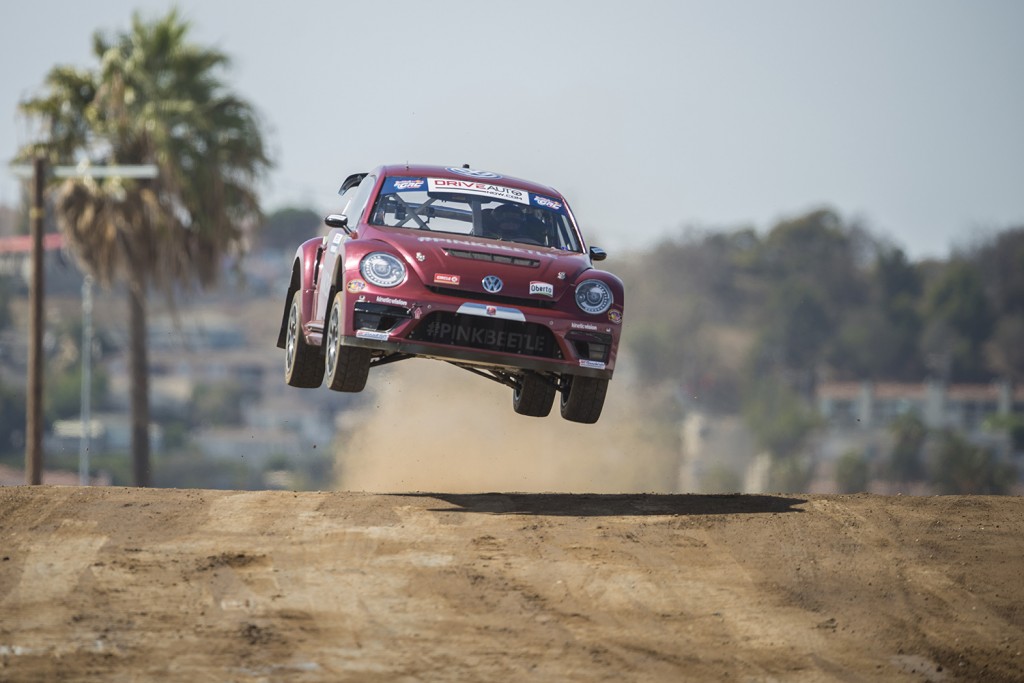 Volkswagen Andretti Rallycross enjoyed a remarkable season in 2016. The team took eight victories from 11 race entries and secured the Manufacturer’s and Driver’s Championship, despite entering only two cars throughout the season.

“The Volkswagen Andretti guys are the best in the paddock,” exclaimed Speed as he accepted the Driver’s Championship trophy. “It’s an honor to work with them and with such a great teammate. I’m so happy to share this moment with everyone right now and I can’t wait to get back to work next year.”