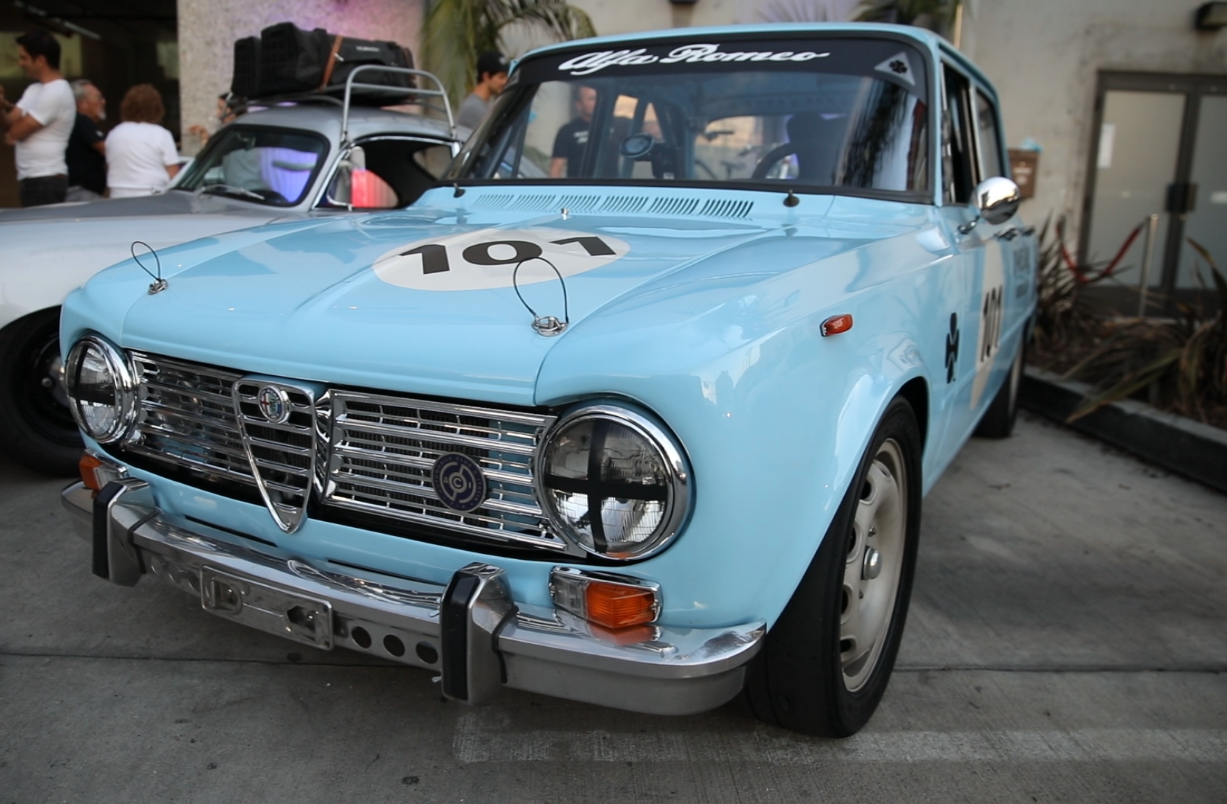 It’s not every day you happen across a vintage Alfa Romeo race car, so when I saw Dorian Valenzuela‘s 1969 Alfa Romeo Giulia Super parked in front of the Red Bull Music Academy party at The ID Agency, I just had to get a close look at the details! According to Dorian, this classic Alfa race car was built to FIA specs, and was purpose built for the Carrera Panamericana road rally in Mexico.

Watch the video above to check out all the details of the car!

I decided to include some screenshots from the video in this post, so you could see some stills of the car, below: 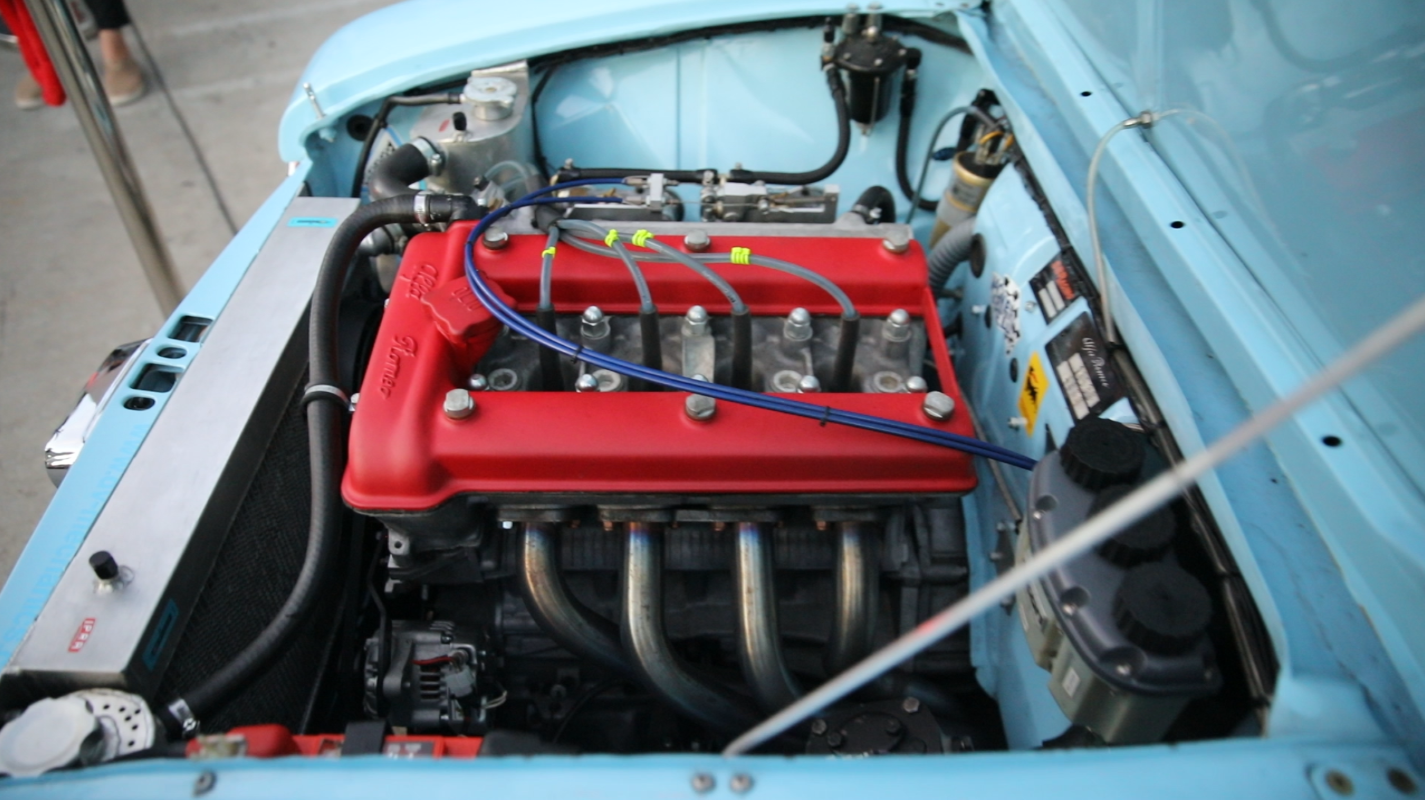 Here’s a sneak peek under the hood. That red valve cover looks awesome as it contrasts to the car’s light blue paint! Apparently, this car was painted inside and out, top and bottom on an automotive rotisserie. After going through all this effort to make the bottom side spotless, Dorian tells us he’s going to drive this thing offroad in a classic road rally in Mexico!!! (Insert =O emoji here)

The custom radiator and Alfaholics header looks great under the hood too, and check out the brake master cylinder reservoir from Tilton! 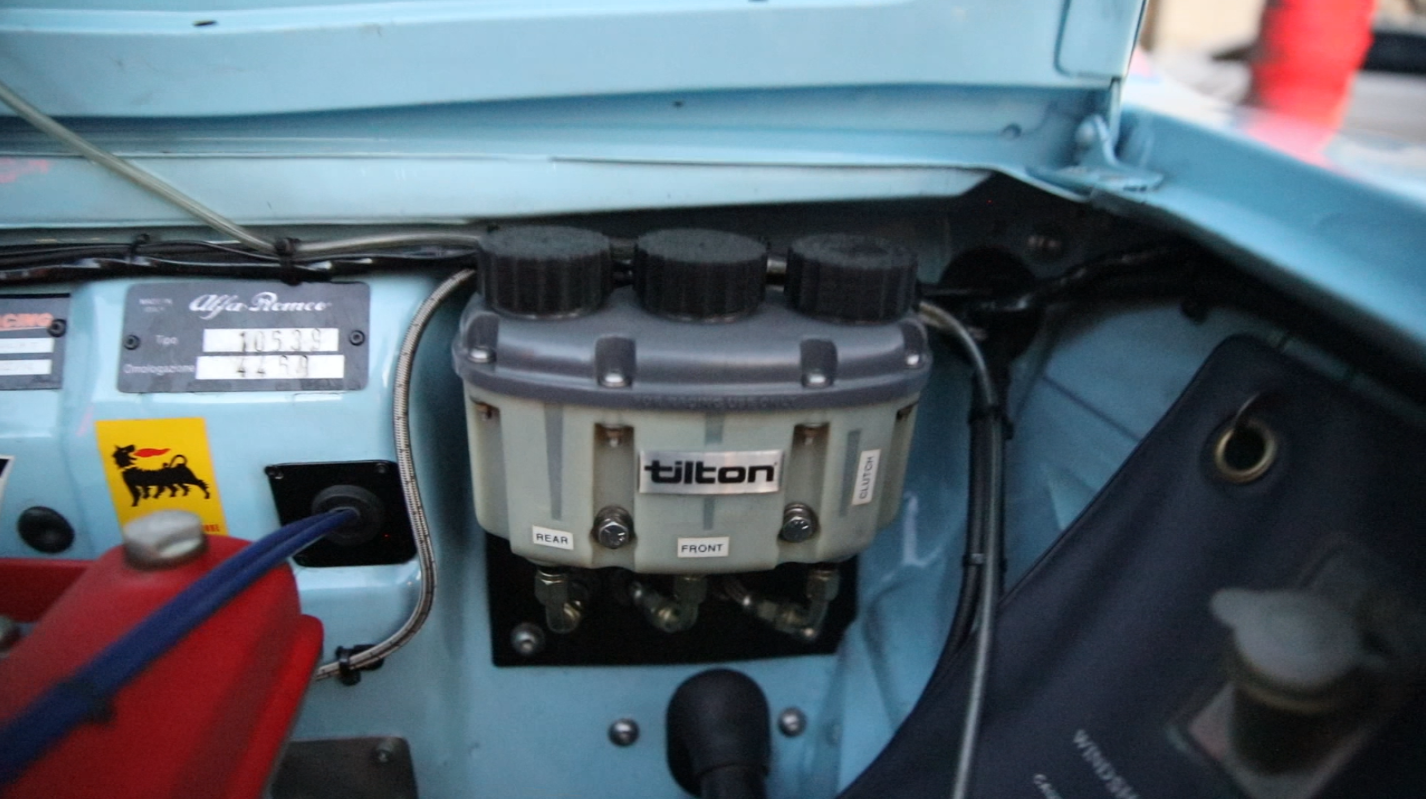 This brake fluid reservoir connects to a full Tilton race pedal box. Sheesh, Dorian must be making the big bucks now that he’s opened up his own shop! So dope. 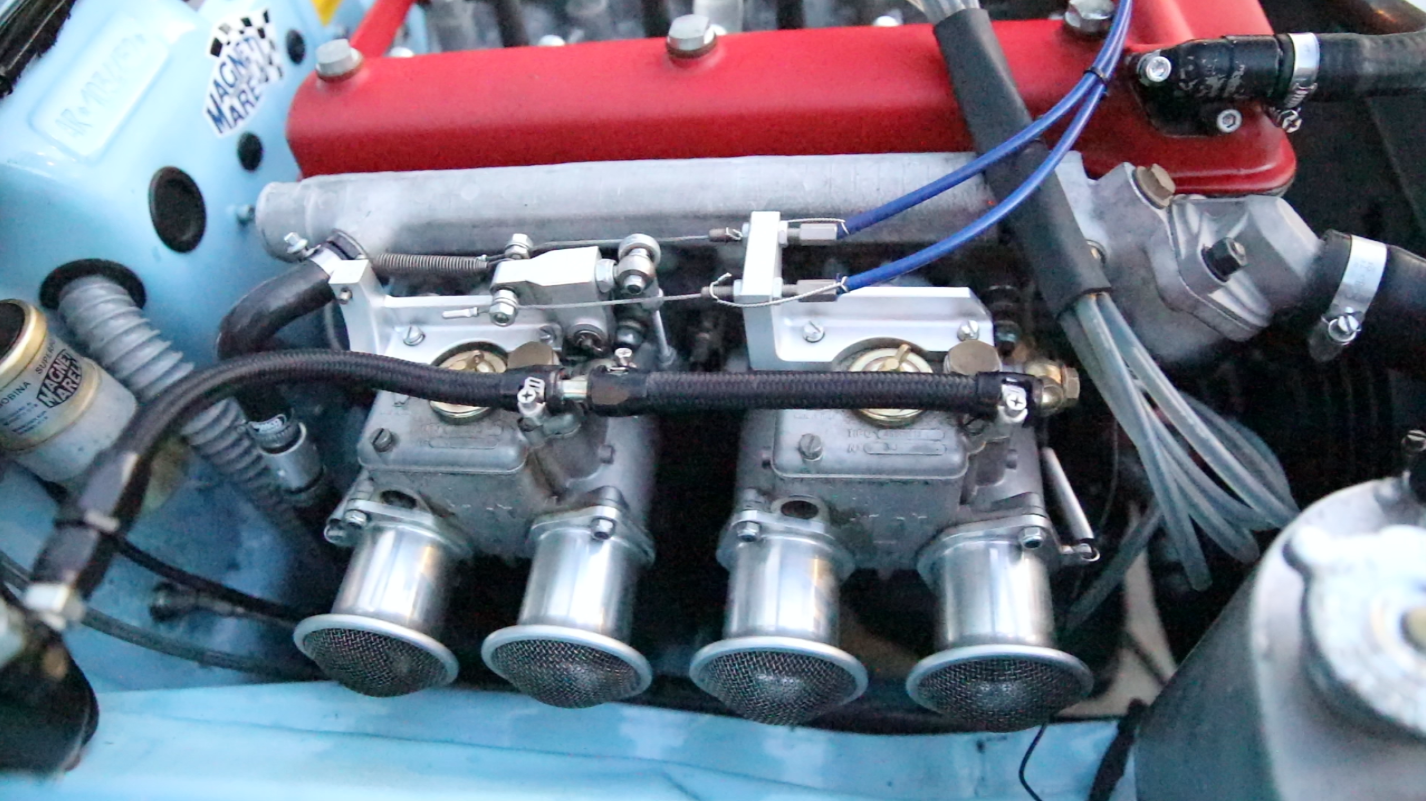 According to Dorian, Italian Weber carbs are better than Spanish Weber carbs. I didn’t even know there was a difference, but I guess you learn something new every day! I have Mikuni carbs on my old school cars, and I haven’t owned anything with Weber twin side draft carbs for over 10 years. Either way, I dig the cleanliness of how he set up the black fuel lines. The black colored braided hose looks great, as the black color really lets the silver carbs pop through. I’m sure the real reason he chose the teflon covered hose wasn’t for aesthetics though!

I dig the microphone-style screens on the air horns. I thought those were just mesh screens that he attached somehow, inside the velocity stack – but apparently, Dorian says you can just find those complete assemblies on eBay! Either way, they look dope. 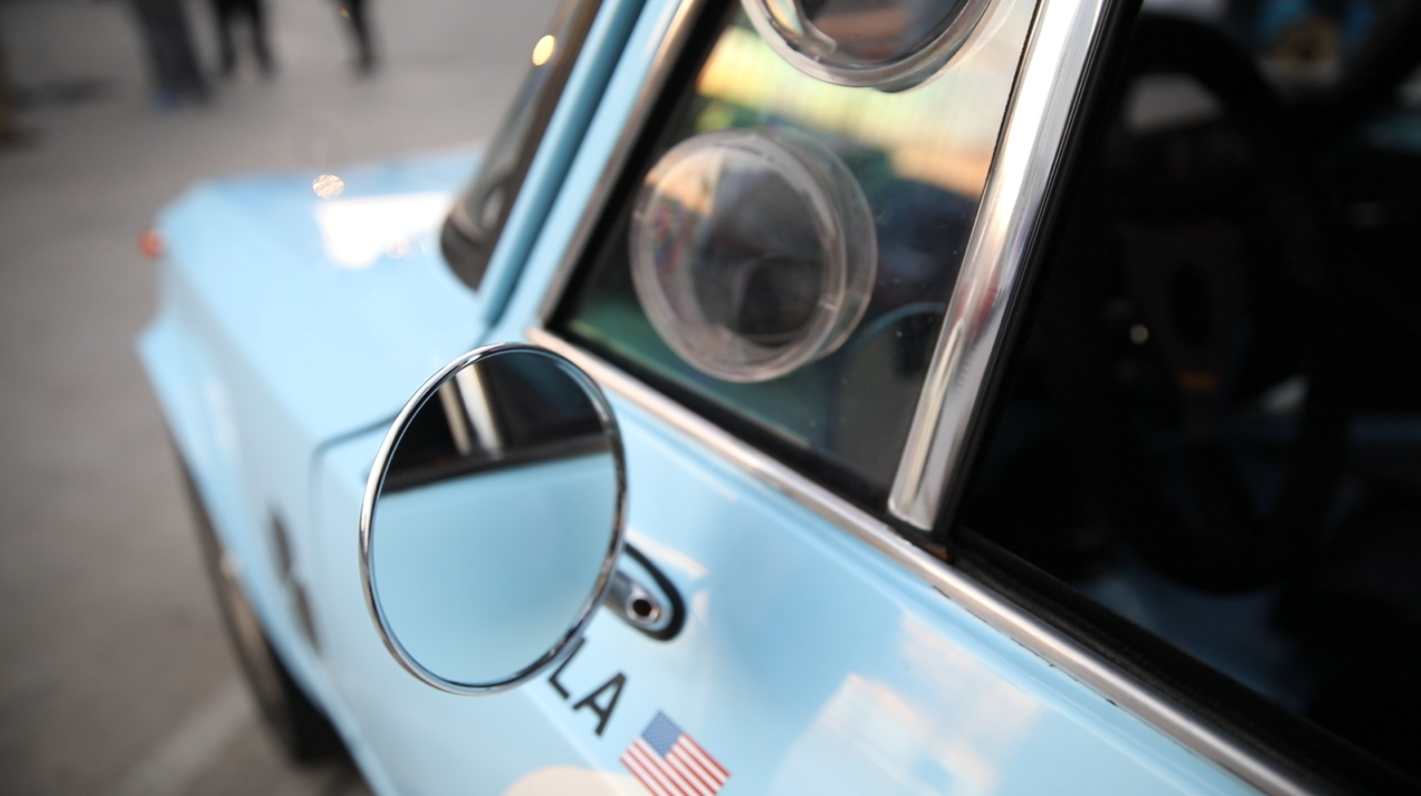 I just love the look of a vintage door mirror. 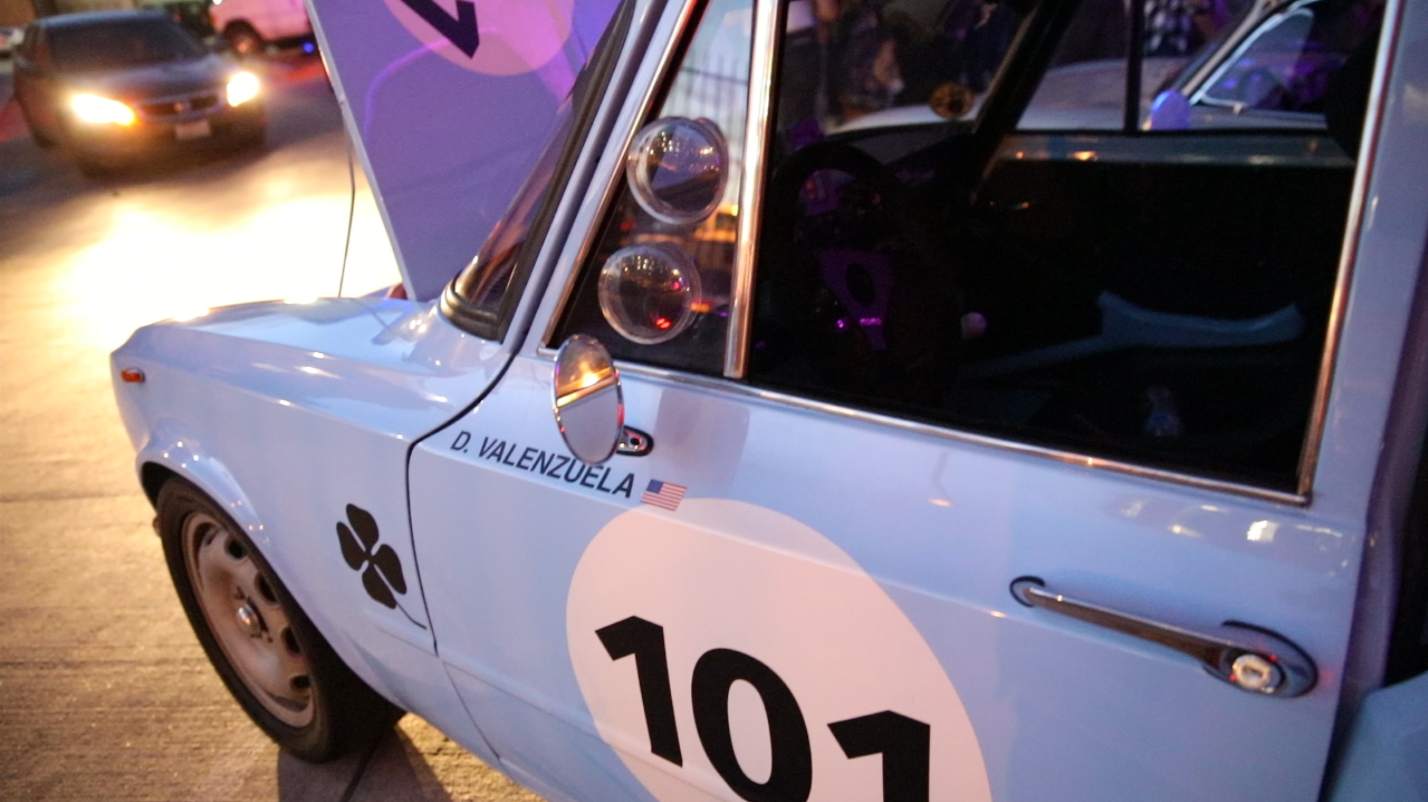 Check out the bubble-shaped wind cut-outs in the forward window, which allow some fresh air to get into the cockpit while the windows are up. Dorian says the inside of the car smells of fuel from the twin carbs! 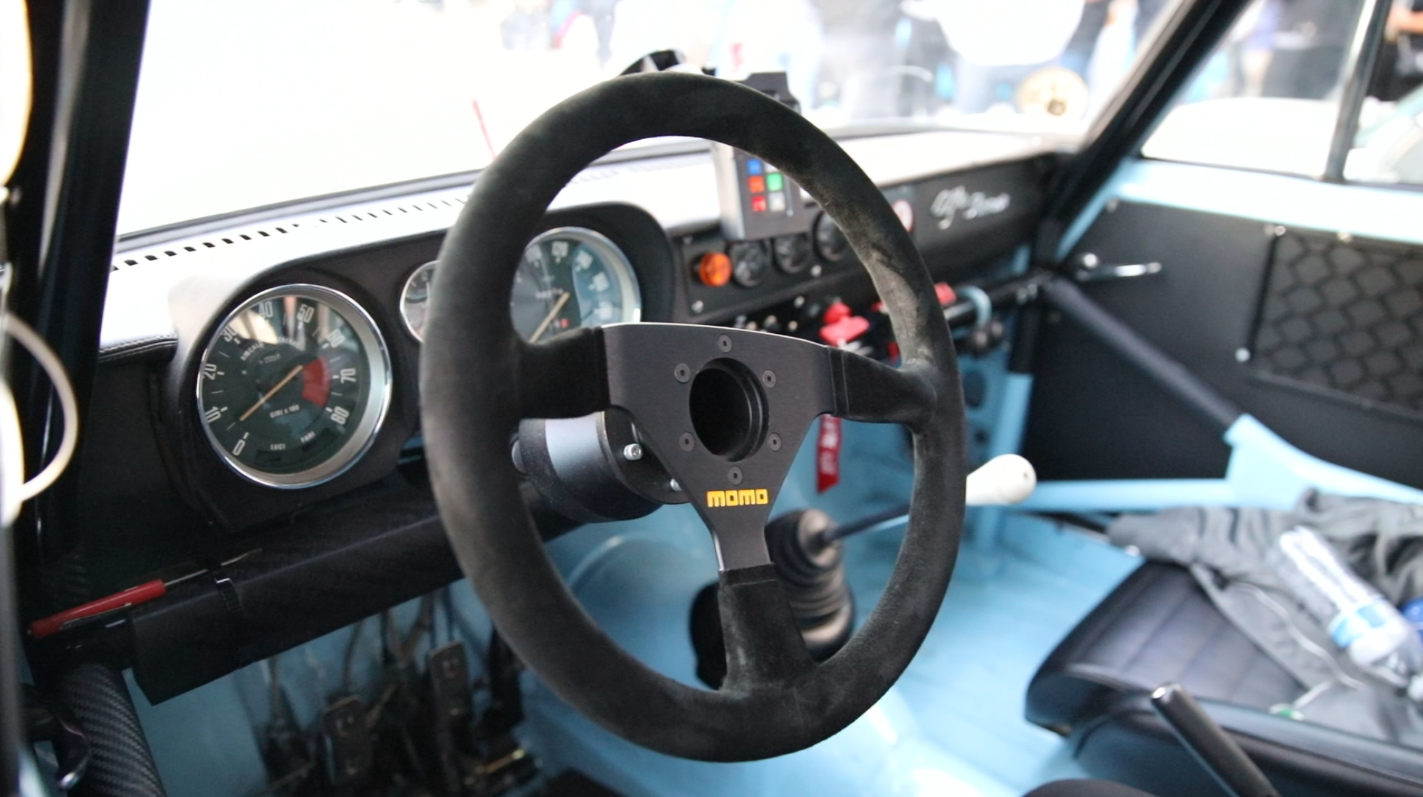 Inside the car, a Momo 350mm suede steering wheel is attached to a cool looking solid metal steering wheel hub, without the horn button in the middle (for weight reduction, of course). A plethora of gauges, switches, and a full welded cage let you know that this car is ready for action! Love the shift knob too. 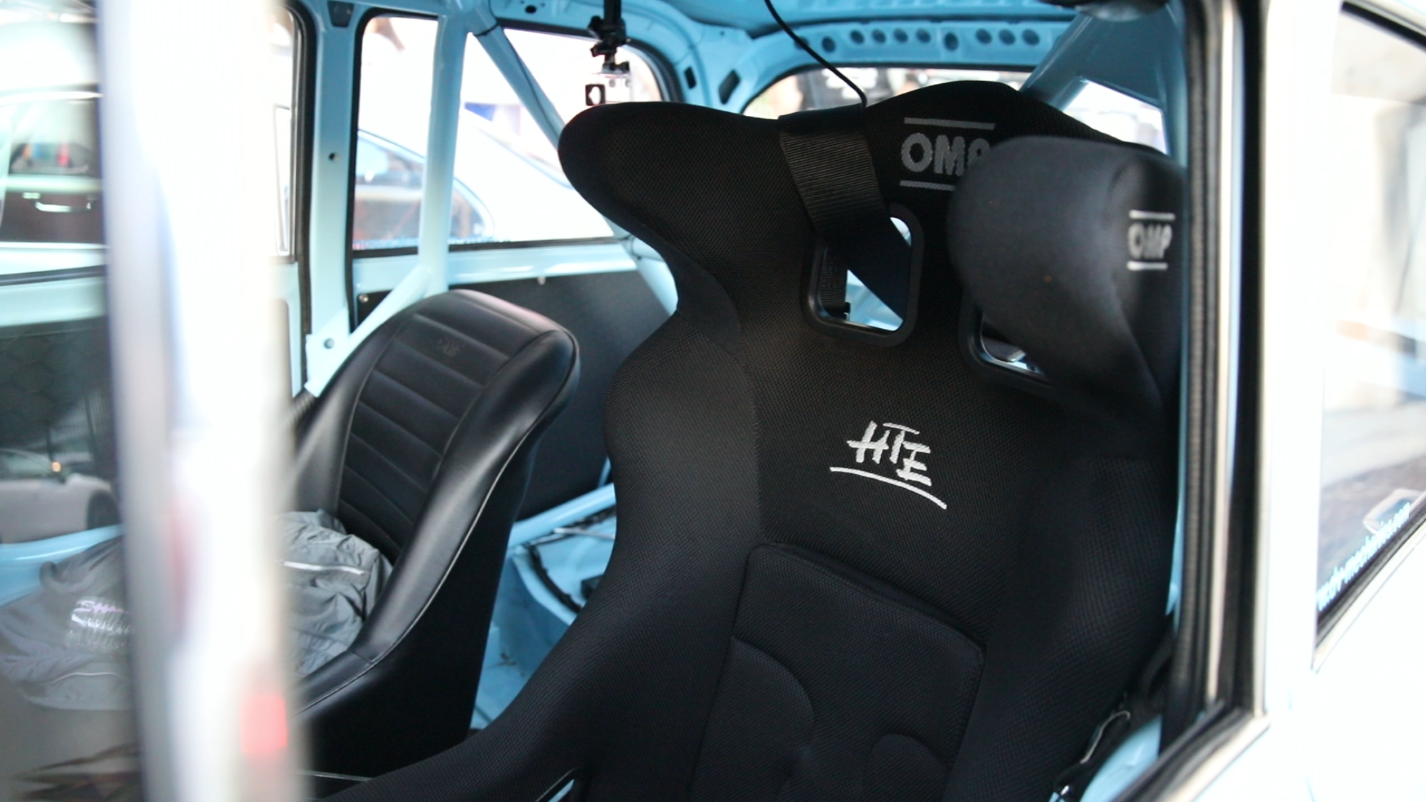 An OMP fixed bucket seat with head restraints has been mounted in the driver position, because Dorian like to keep a low profile and doesn’t want people staring directly at him when he’s doing donuts in the car. Understandable, I get it. The vintage fixed back vinyl passenger seat looks great paired up with the modern race seat too – it just works. 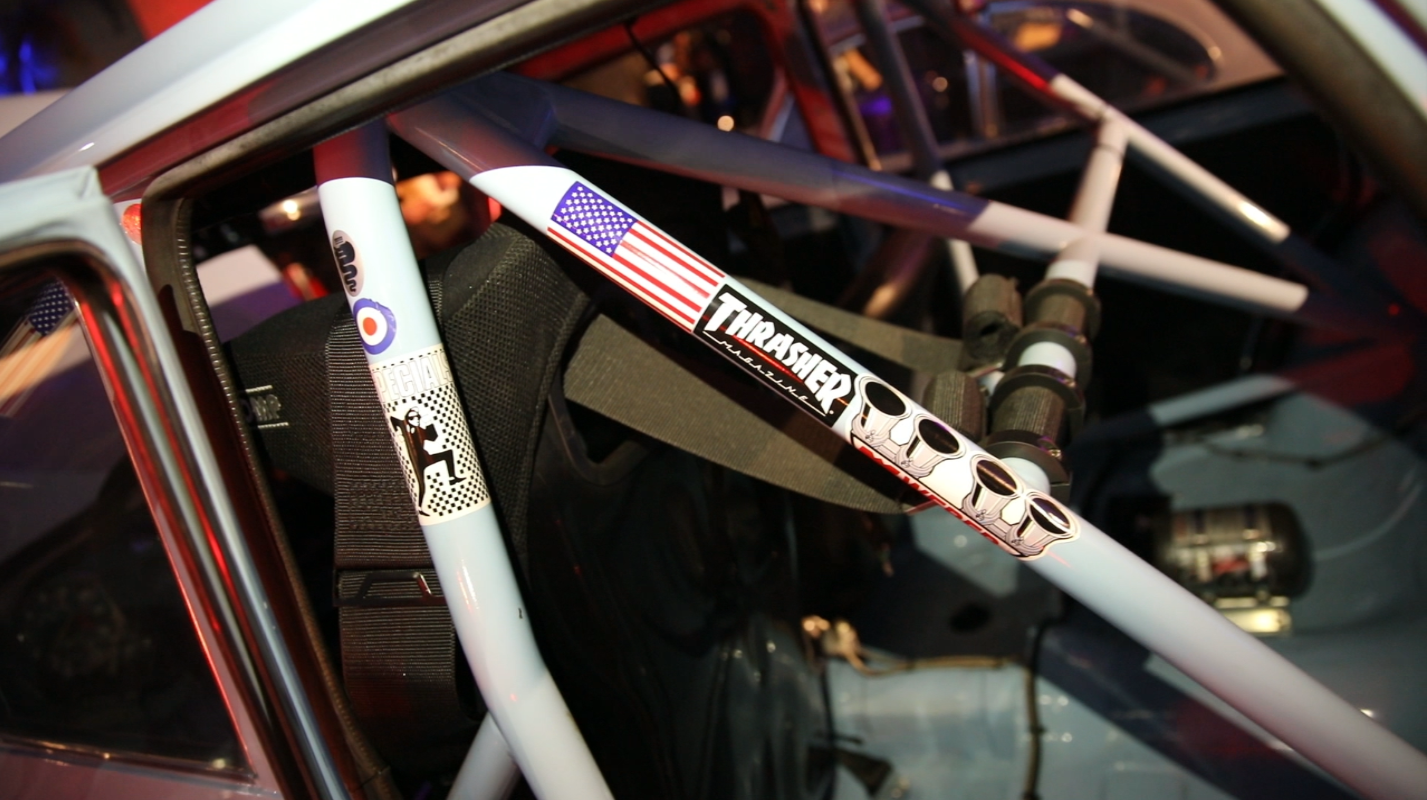 The rollcage has an appropriately welded-in harness bar, which has collars to prevent the 3 inch belts from moving around. The Weber twin side draft carb sticker looks super cool too! 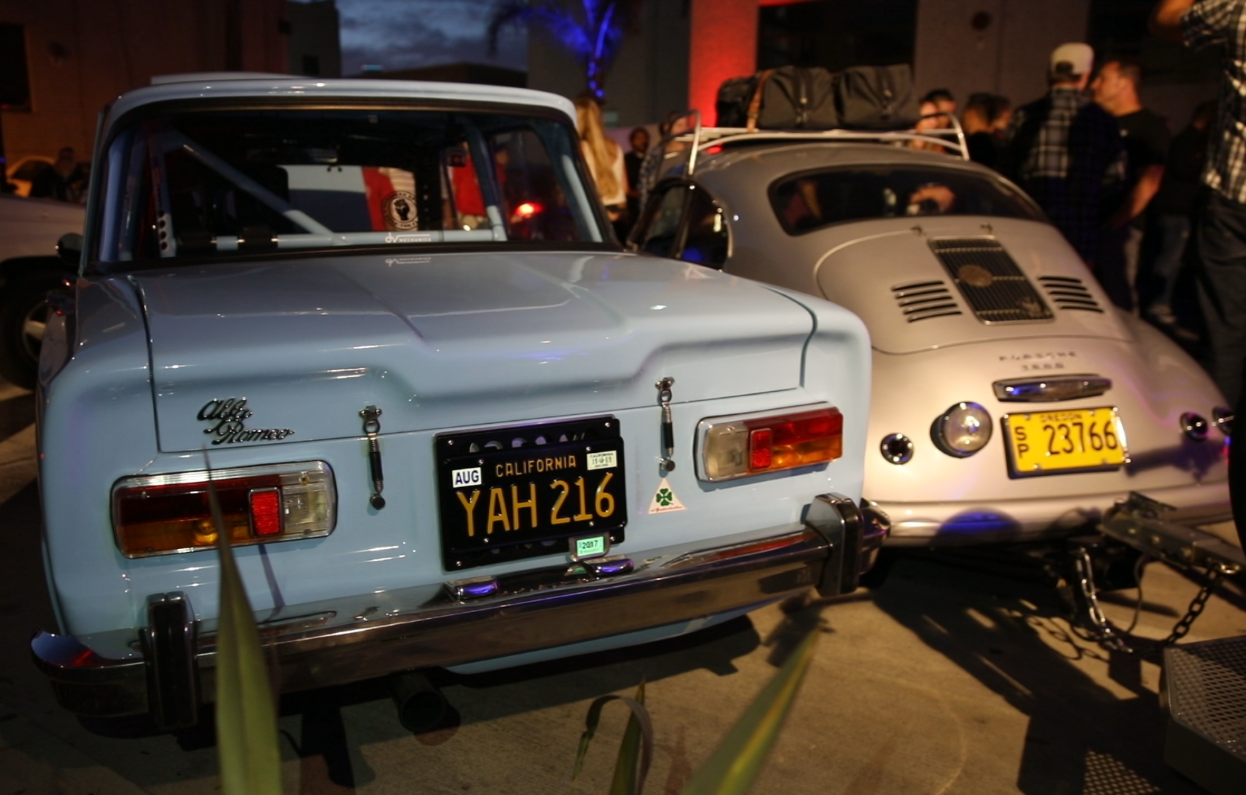 Here’s the view from the rear. Clearly this little Alfa has some awesome vintage bodylines, from the dip in the rear trunk lid to the lip going around the rear of the vehicle, to the small Euro bumpers. This thing is pure style, and I can’t wait to see footage of it in action next year when it rallies in Mexico!