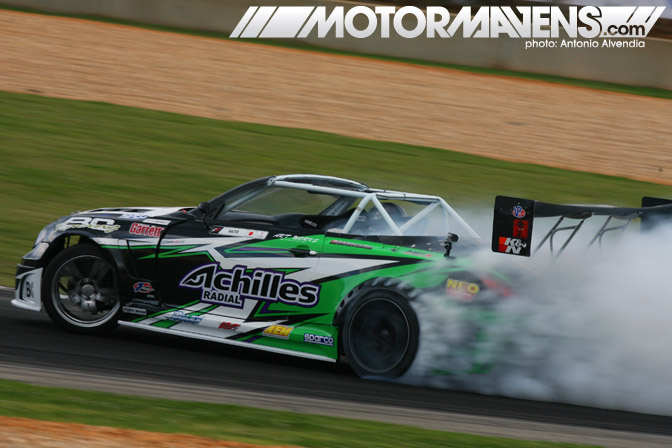 The changes in weather made it extremely difficult for the drivers at Road Atlanta. The rain slicked track proved to be a challenge as the event entered into the Top 16 portion of the competition.

Heading into the competition, Daijiro Yoshihara in the Discount Tire / Falken Tire Nissan 240SX held the points lead, but surprisingly failed to make it into the Top 16, opening the opportunity for other drivers in the point standings. Michael Essa in the GSR Autosport / Yokohama Tire BMW M3 faced Vaughn Gittin, Jr. in the Monster Energy / Nitto Tire Ford Mustang RTR in the consolation round.

JR Gittin won third place and took the lead in the 2013 Pro Championship point standings. The final round pitted Darren McNamara in the Falken Tire Nissan 240SX against returning champion Daigo Saito. On the first run, McNamara misjudged the speed of Saito and ran into his car causing damage and giving up the advantage, which his team was not able to overcome. Saito earned his first victory of the season and moves into second place overall. 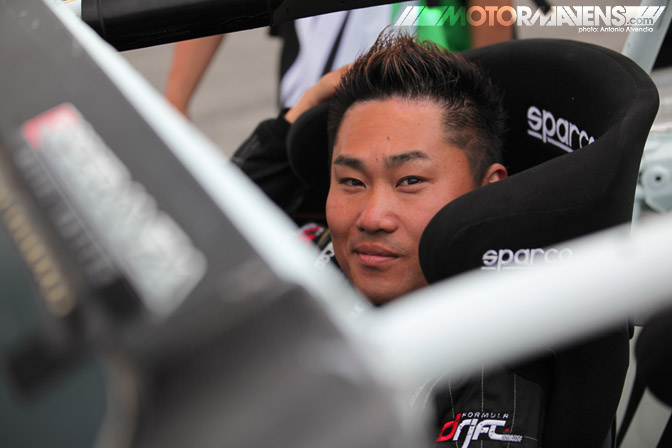 “This almost feels like revenge from Long Beach since I was only able to make it into the Top 16 at Round 1,” said Daigo Saito, winner of Round 2: Road to the Championship. “The track conditions were horrible and it could have been anyone that won, but I am happy that I was able to pull off the victory. Thanks to the team and Achilles for helping make this all possible.”

“Drifting is chaotic and unpredictable,” stated Jim Liaw, president and co-founder of Formula DRIFT. “Today showed the ability of the Formula DRIFT drivers to adapt to the changing conditions while still performing.” Round 2: Road to the Championship returned for the tenth consecutive season to the home of the inaugural Formula DRIFT competition at Road Atlanta. This is the only course on the circuit that has paved a custom section of the track specifically for drifting. Despite the intermittent rain, the fans in Atlanta came out in force and stayed through to the end of the event. Road Atlanta has the largest attendance for the Series outside of California.