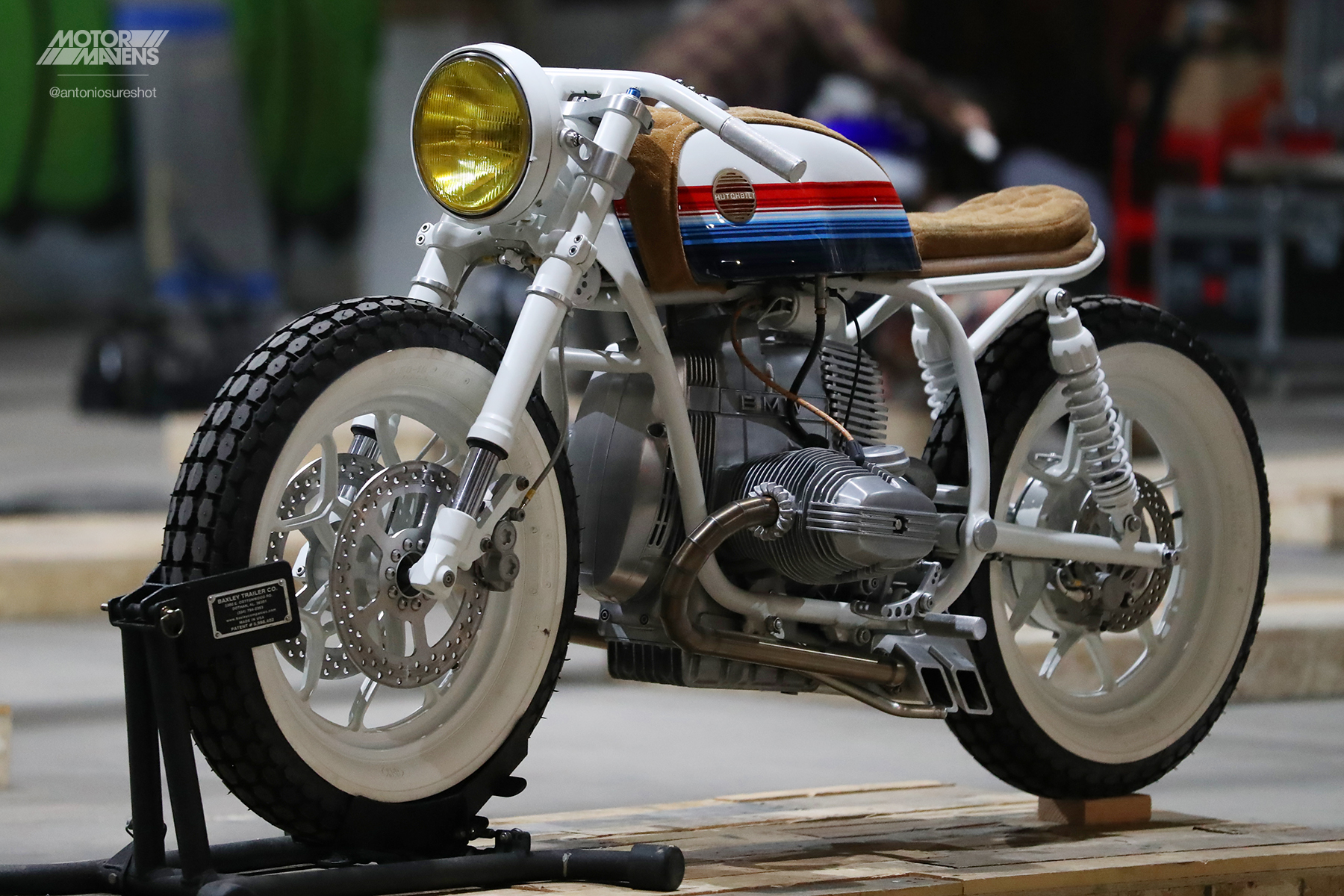 Even though I spent the entire day shooting photos at Willow Springs International Raceway, I sped back to Downtown LA to shoot pics of cafe racers, scramblers, bobbers, trackers, and other custom motorcycles during the last two hours of this weekend’s OG Moto Show (Outliers Guild Moto Show).

This BMW R80 motorcycle built by Jeremy Hutch of Hutchbilt definitely stood apart. Even though the crowded main room of the show was filled with other dope motorcycle builds of all types, I couldn’t help but notice this R80 boardracer, which was named “Skyway” and built as an homage to California culture and BMX bikes of the early 1980s, with its white powdercoated wheels and colorways painted on the fuel tank. 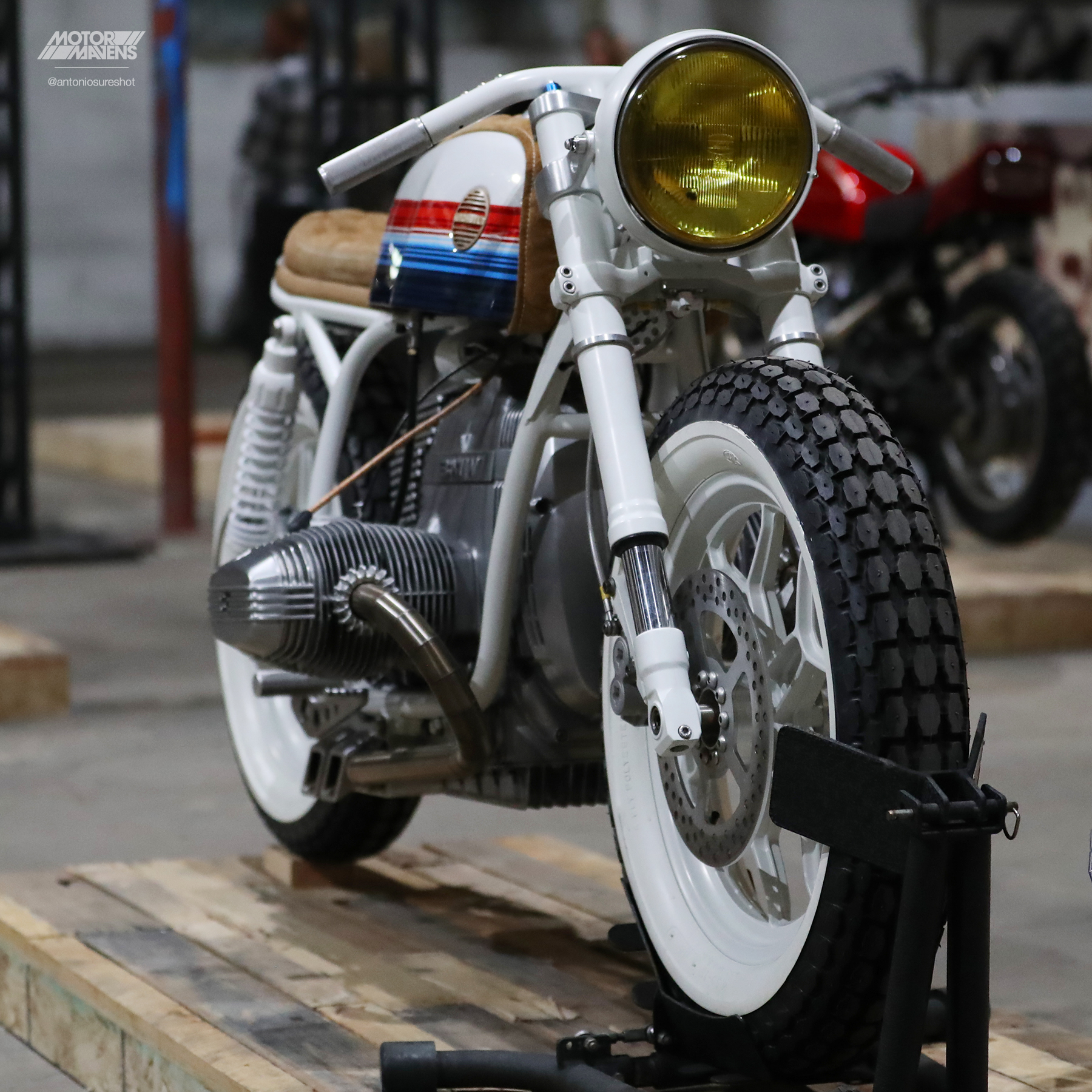 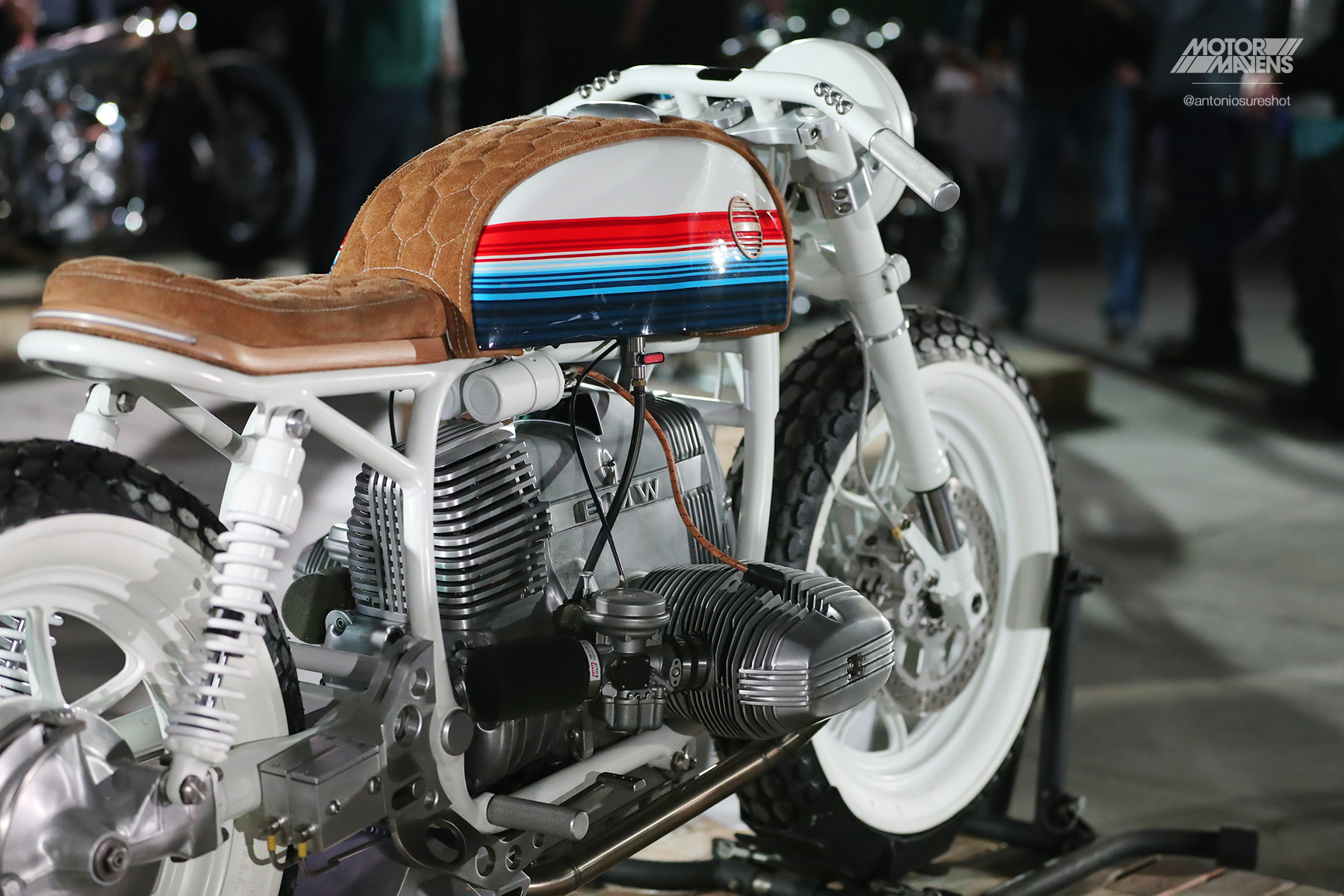 Check out the BMW engine and the honeycomb stitched material on the seat and tank cover. Super clean! 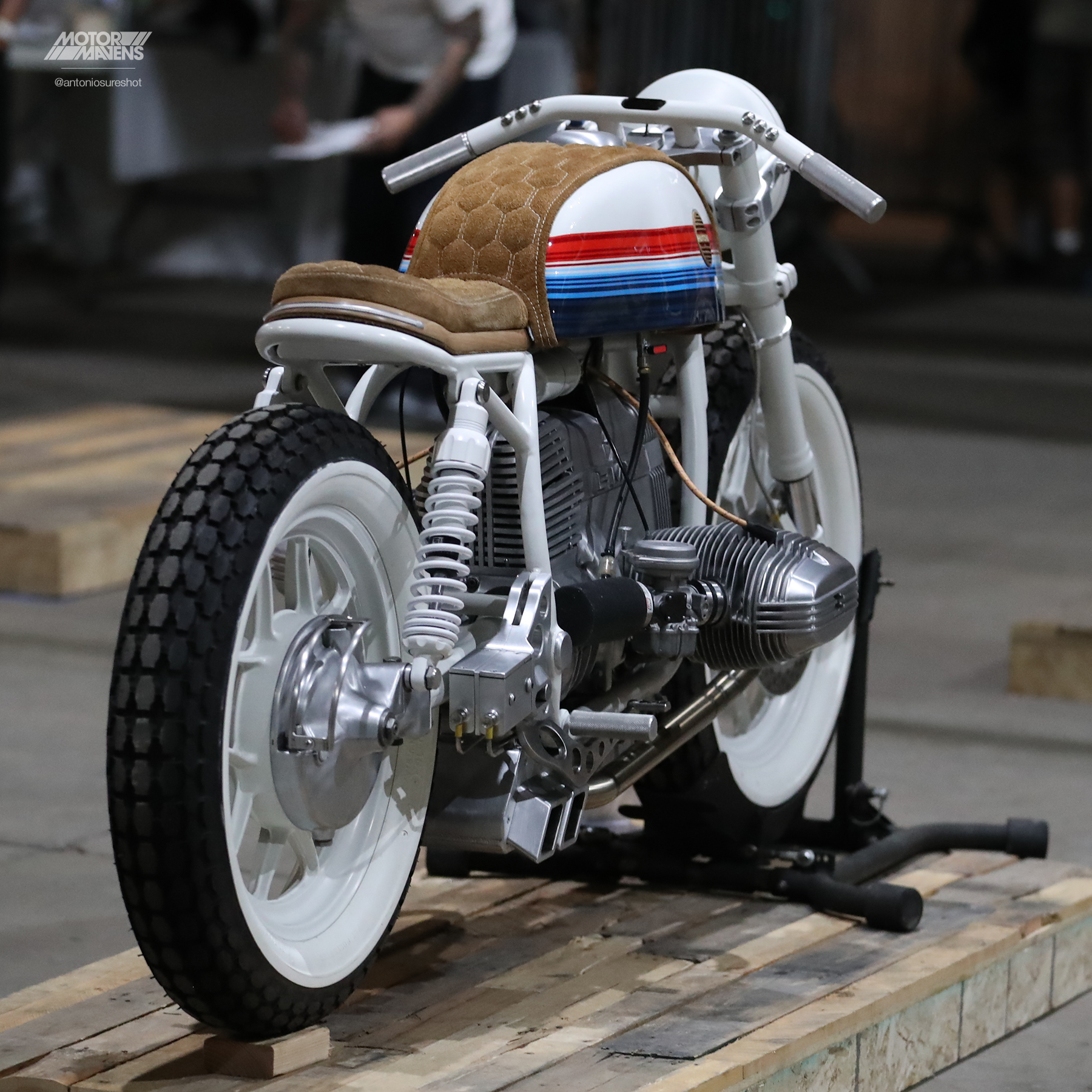 Here’s another shot of the honeycomb material on the bike – such a great contrast to all the powdercoated white pieces. This shot also shows the progressive adjustable rear suspension, which was custom made for this bike.

Damn, the cleanliness of those handlebars with the Motogadget pushbutton controls too! 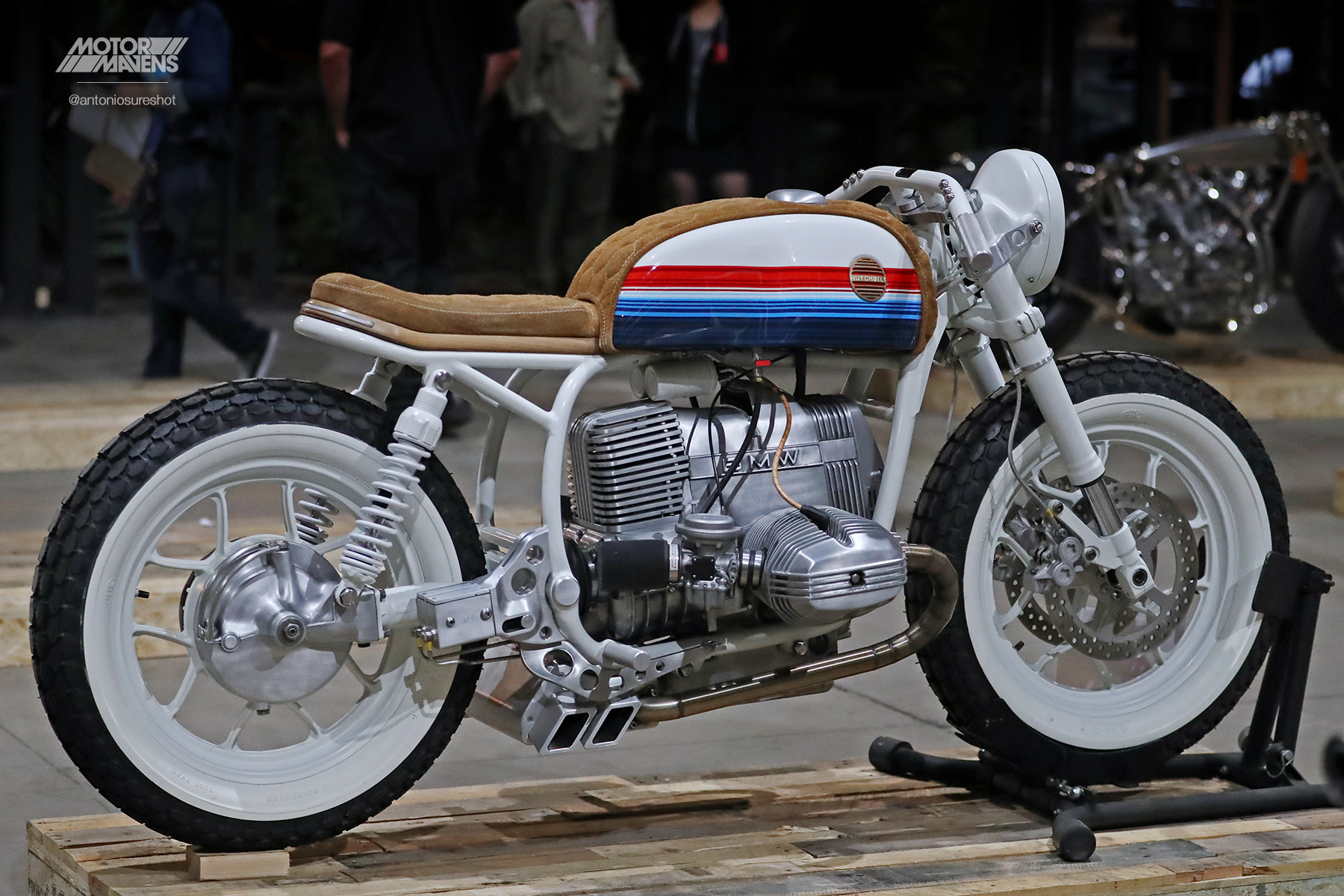 Believe it or not, the paint design came from inspiration from one of Jeremy’s Stance socks, which had a Mexican blanket design on it. That’s crazy! Since this is a BMW after all, Jeremy asked his painter “Mad Skillz Nolan” to lay down the linework in BMW’s Motorsport colors on top of a vintage white with gold pearl. On top of the tank, it’s impossible not to notice the clean billet gas cap, made as a one-off piece by Black Silver.

In this shot, you can see the Yamaha R6 front end that was lowered by 35mm and built by Martin Petsol of MP Suspension. Jeremy also added custom 3CR12 brake rotors that he designed to line up inside the R65 mag cutouts. He did this so the brakes wouldn’t detract from the form of the mags. Nice touch! 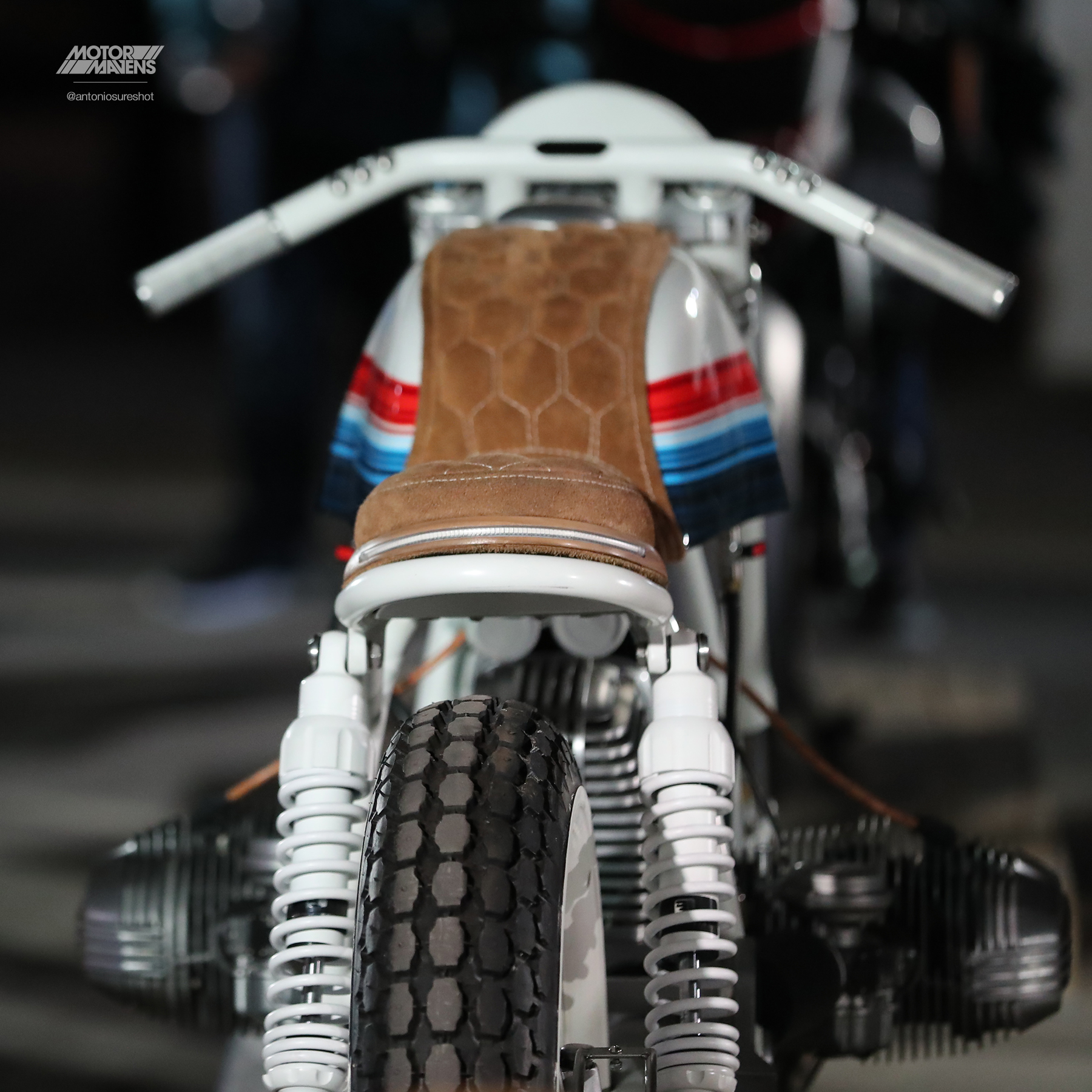 When you take a close look at the rear end, you’ll notice a custom laminated walnut seat base, which was made by Jeremy’s friend, furniture designer Graeme Goode, then attached to the subframe by Bruce Clarke of Stark CNC. This assembly houses the recessed Revival Cycles rear LED brake light and turn signal lights. SO CLEAN! 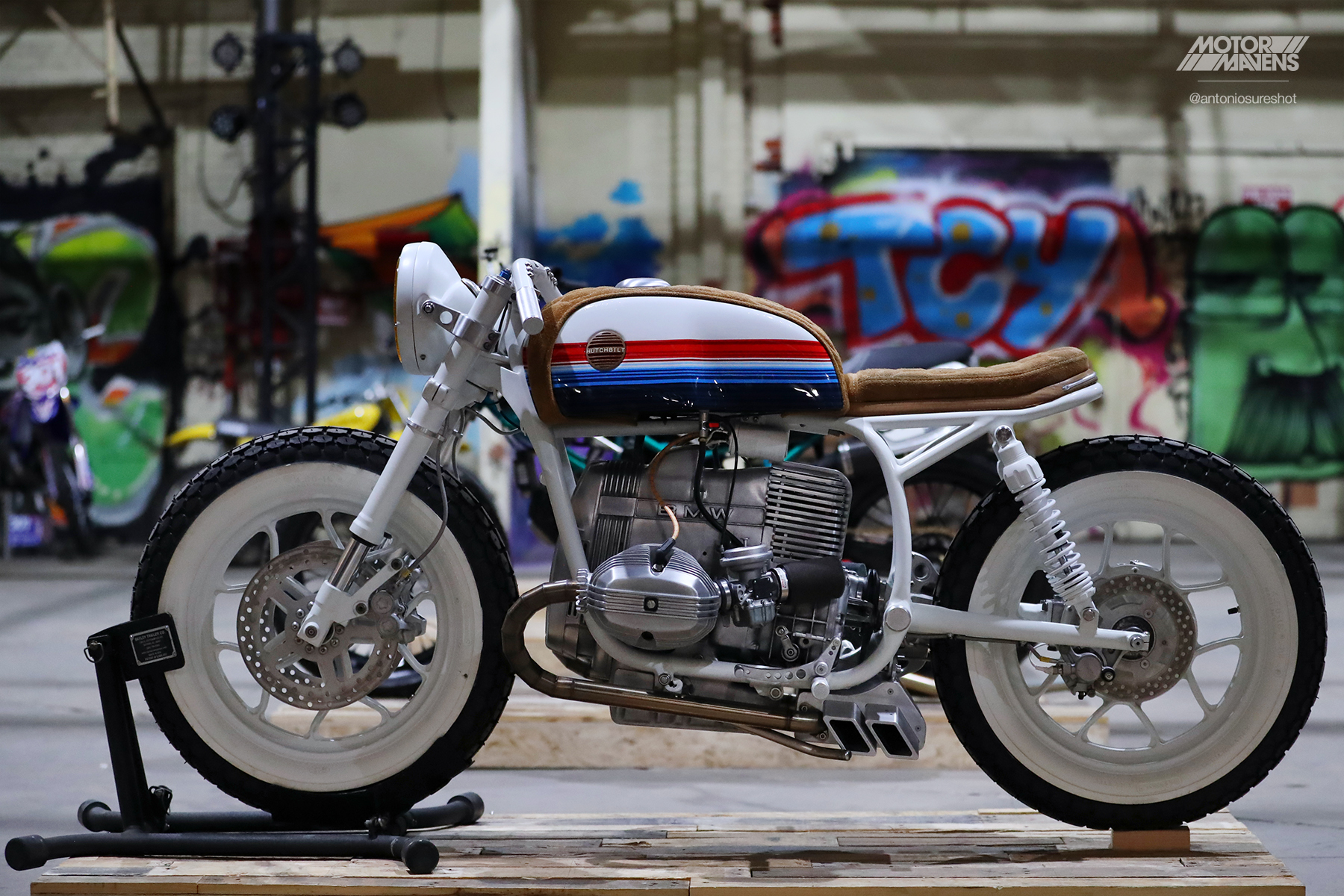 By the way, look at the exhaust!!! The segmented performance exhaust Jeremy designed was made by Reynard Schonken of Scorch Bezerker. He wanted the collector to flow with the frame and the rest of the boxy engine, but also pay homage to the styling of the exhaust tips used on a British Supermarine Spitfire fighter plane from World War II. Each piece was cut from a solid block of aluminum using a CNC machine. Looks super cool. 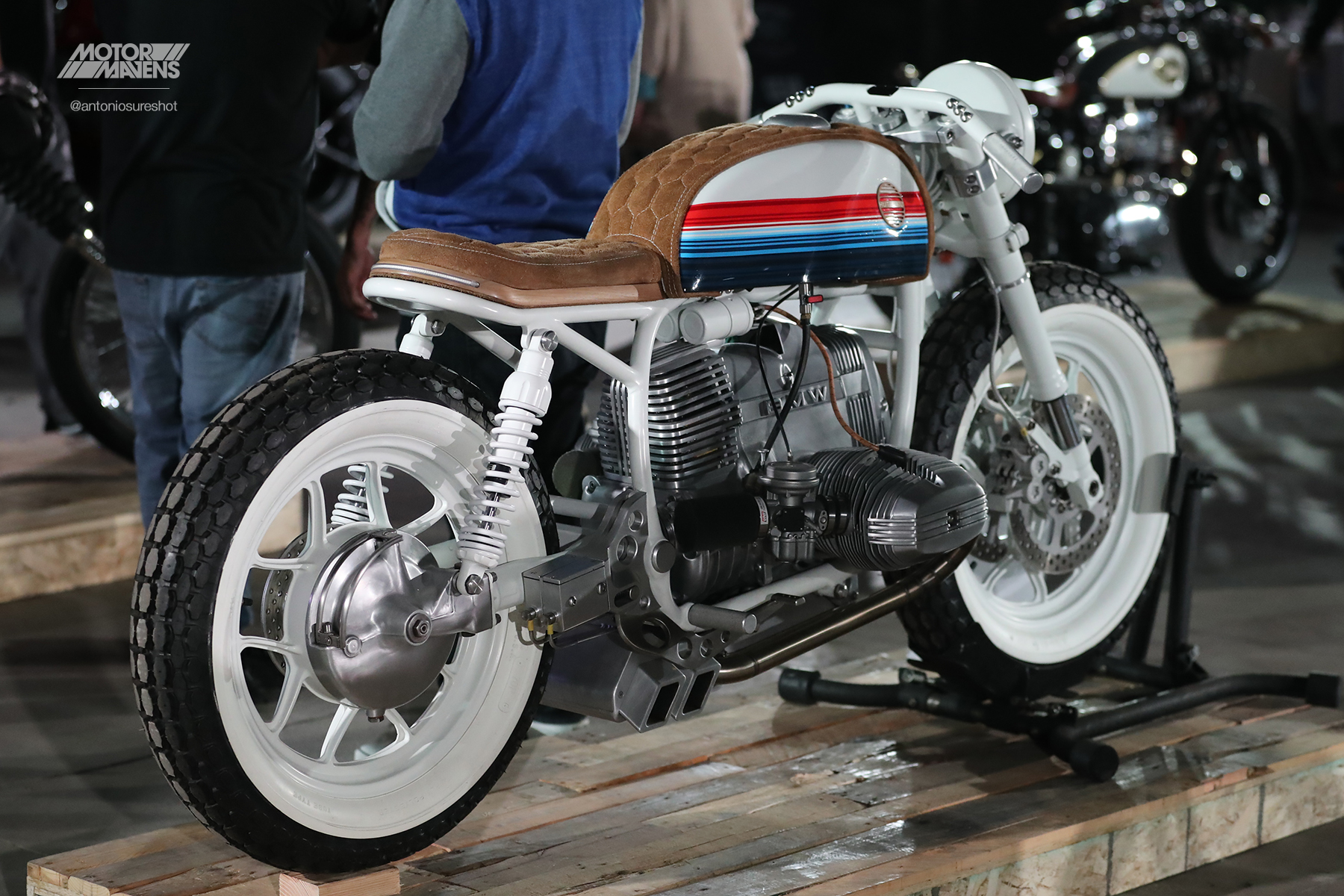 I probably would have spent the entire day at the show had I known about it sooner, but I didn’t even hear about it until my other friends posted up on Instagram. Hopefully next time I have more advance notice, so I can shoot even more of the awesome bikes at the event.

I have about 500 more photos from the show, so stay tuned to MotorMavens on Facebook and on Instagram for more updates!