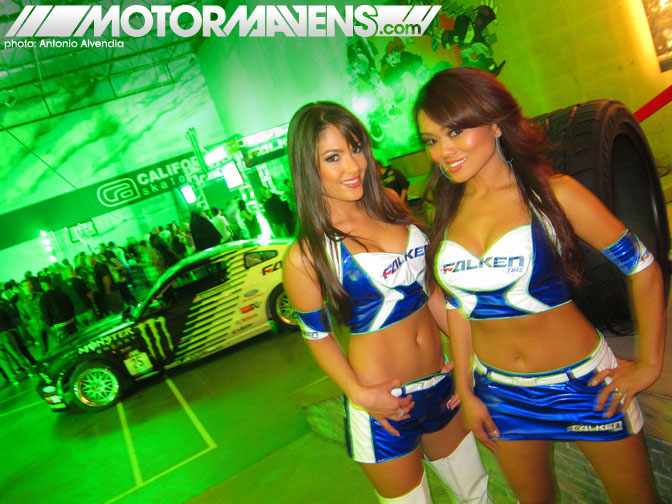 I just got back from Rob Dyrdek’s Fantasy Factory in Los Angeles, where Monster Energy Drink and Falken Tires were having a party to announce their big news. Of course, quite a lot of media people already knew about it before the party, as the email invitations weren’t exactly subtle; especially when several people kept asking me throughout the day, “Hey, are you going to the Monster party tonight?”

As with most of these types of shindigs, the event was pretty a much who’s who of the drifting, automotive, and beverage industries, mixed in with skaters, media people, and a whole lot of females. For me, it was fun because it was a chance to hang out and enjoy some laughs and the open bar with some of my industry friends, as well as meet some cool people from the grassroots drifting scenes in different states (and countries). While several people were out there trying to meet pro skater Rob Dyrdek (of the MTV show, Rob Dyrdek’s Fantasy Factory), Motor Mavens’ resident skate fiends Edward Uche and Justin Shreeve were just salivating at the chance to skate the ramps at the Fantasy Factory. (They got to skate for a little bit until the security guards came up and said, “you guys need to stop because your skateboards might hit someone, and we could get sued.” Aw man!

Regardless, I had a chance to chill for a bit with my buddy Vaughn Gittin Senior (JR’s dad) and congratulate him on the new venture. Man, he was just beaming, super proud of his son’s accomplishments thus far. So CONGRATULATIONS to Vaughn Gittin Sr. and to JR… we can’t wait to see that thing out on the track!

PS: For more pics from the party tonight (and by more pics, I mean pics of the girls that were in attendance)… then add Motor Mavens Crew on Facebook and check out our albums! The photo above was shot with my Canon S90 point and shoot pocket camera! (Too bad Eri moved a little though… I forgot to tell her it was a long exposure.)