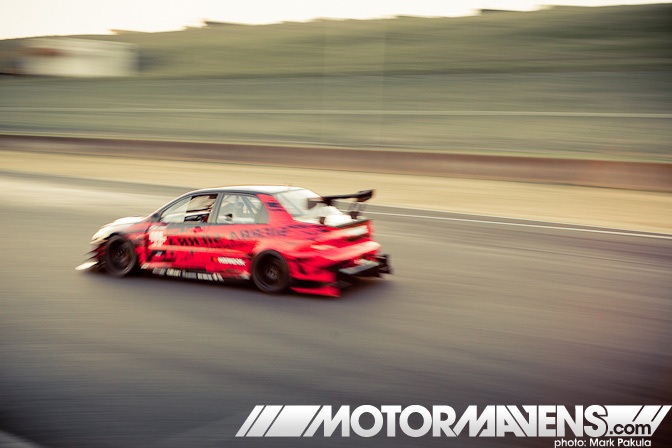 Today’s open practice at “the creek” featured the first few laps for several of the foreign cars.  The record-holding Sierra Sierra Evo was right on the pace early in the day. 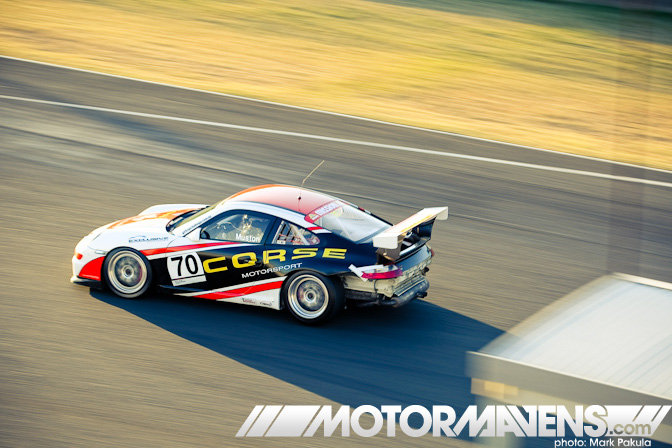 Since this was an open session at the track, cars such as this Porsche 911 (not competing in the WTAC) also hit the track for a few laps. 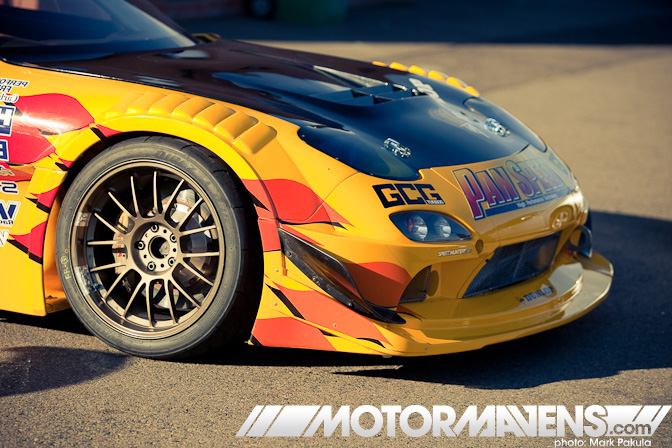 The Panspeed FD3S RX-7 made the trip all the way from Japan! I think Eastern Creek should definitely suit the coupe. 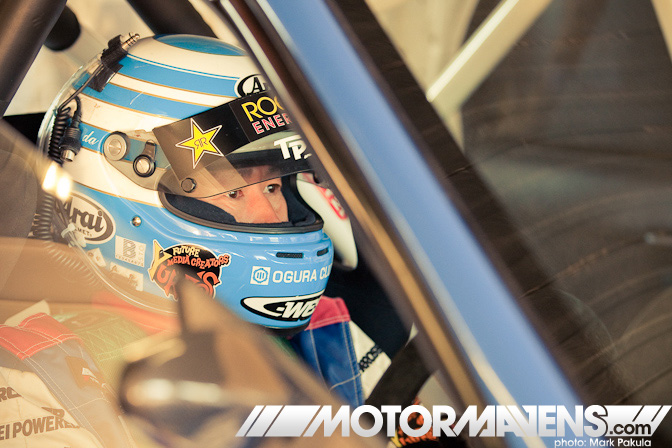 Along with the cars, several drivers have arrived from Japan, none more famous than Tarzan Yamada. Today he took the Tomei/Cusco Subaru WRX out for a few installation laps. 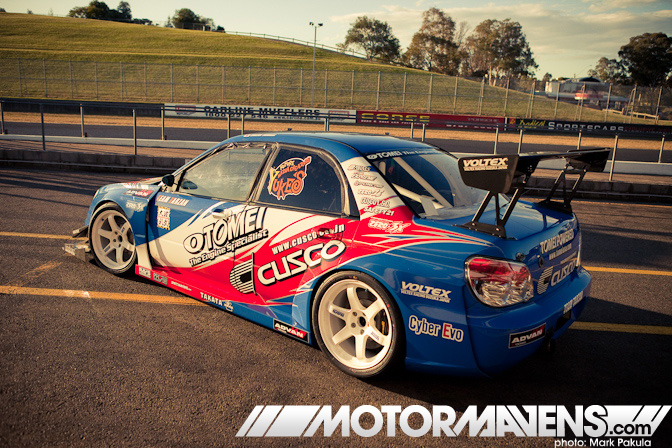 It’s always a pleasure to see well designed graphics on a car. Seeing this famous widebody WRX competing here in Australia is exciting! 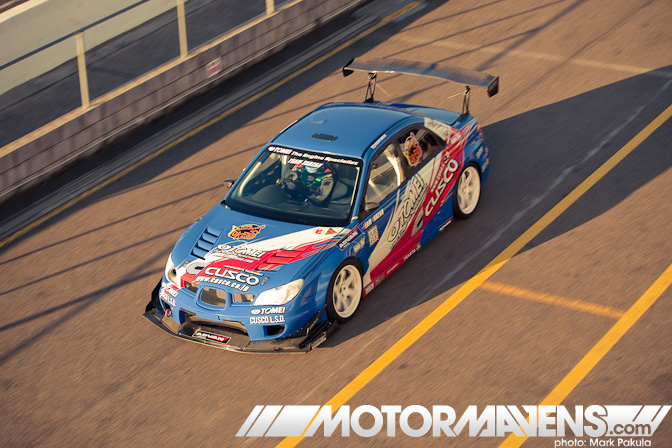 The Tomei/Cusco WRX has received several upgrades to suit the high speed nature of the creek. The long straight and turn 1 make the track suitable to high power cars more so than lighter, lower powered cars. 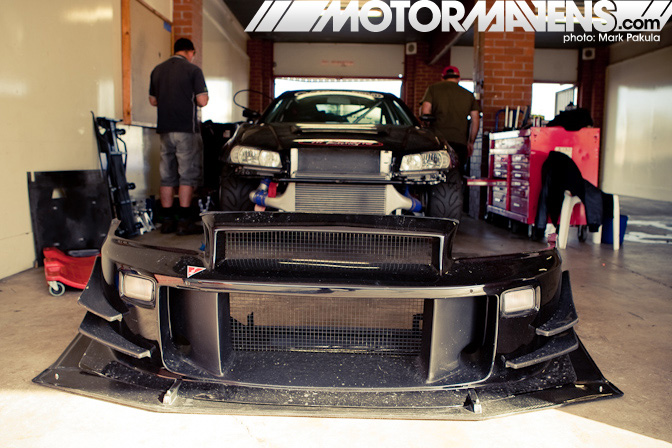 The Hi Octane Racing Advan R34 Skyline GT-R was built specifically for this event, and should perform well. It is possibly the best hope out of the locally built cars. 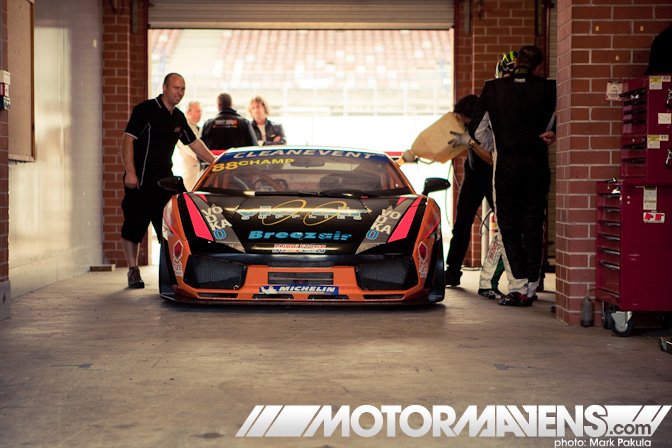 While not a competing car in WTAC, this Lamborghini Gallardo just looked amazing in the pit garage. 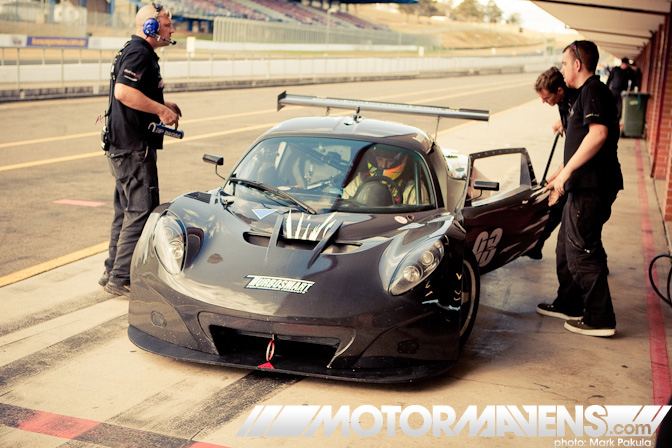 A late entry into the PRO class is Angelo Lazaris and his Lotus Exige GT3. This car has an all carbon fibre body, and sounded amazing. 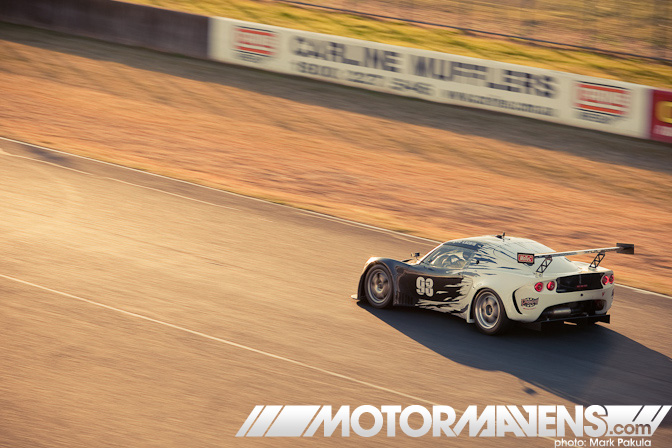 Angelo managed to push out several laps. In the late afternoon, turn 1 heads into the sun, making for great photos. 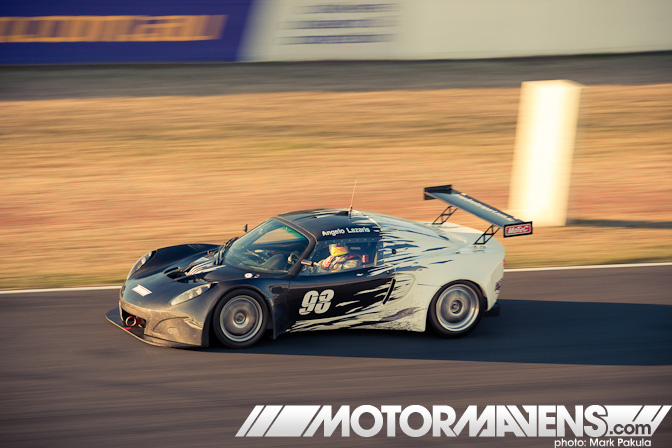 The two-tone effect works well with the car; carbon front with a white painted rear. 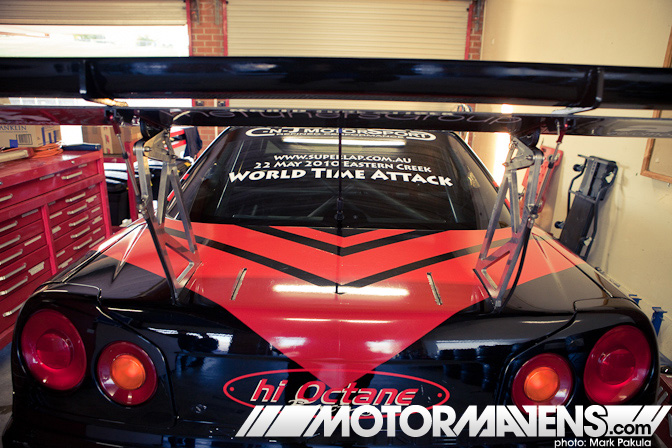 The huge wing on the Hi Octane Racing Advan R34 helps the car put the 700 horses down. 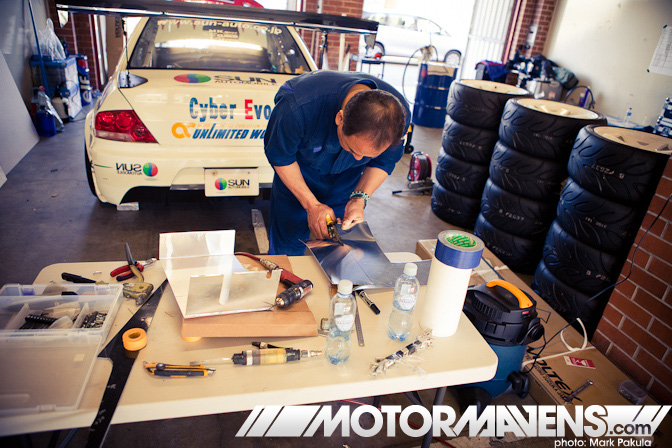 There’s nothing like a bit of last minute fabrication. The Sun Auto Cyber Evo should also be competitive for the outright title. 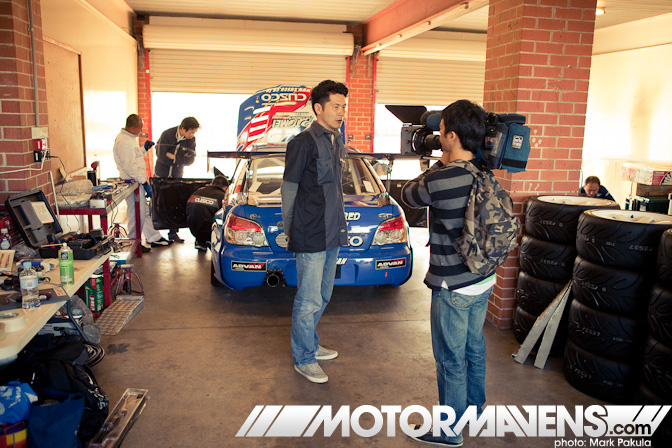 Here’s Yamamoto-san from Tomei Powered being interview by the media. It seems a huge contingent of the world’s media are also heading to Sydney for the World Time Attack Challenge. Of course, MotorMavens will bring you updates from the next 3 days. 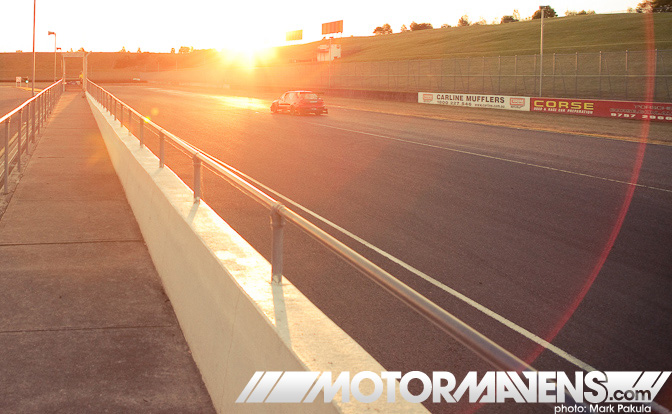 With the sun fading fast, the Sierra Sierra EVO managed to get back out on the track after a small interruption. This car has to be one of the favorites out here. 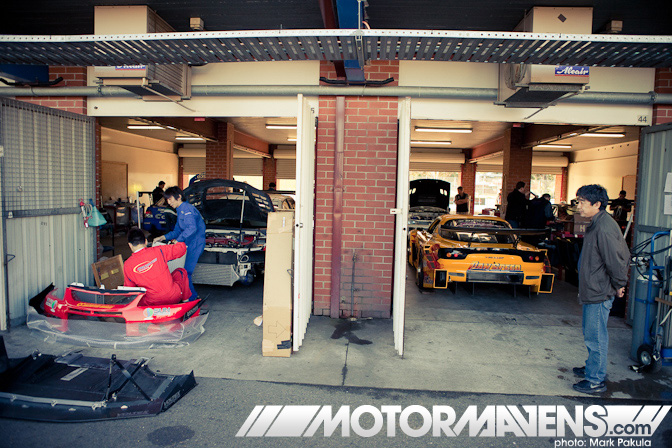 The pit garages at Eastern Creek aren’t huge, however, seeing cars such as this pair, the Panspeed RX-7 and Cyber EVO at the creek is pretty amazing. 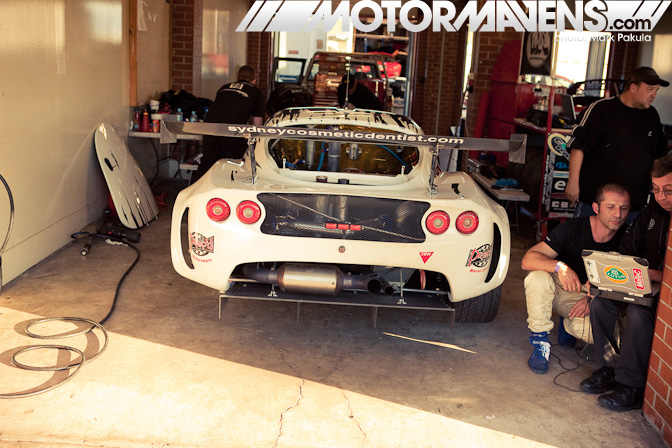 Angelo Lazaris and his crew study the car’s telemetry. 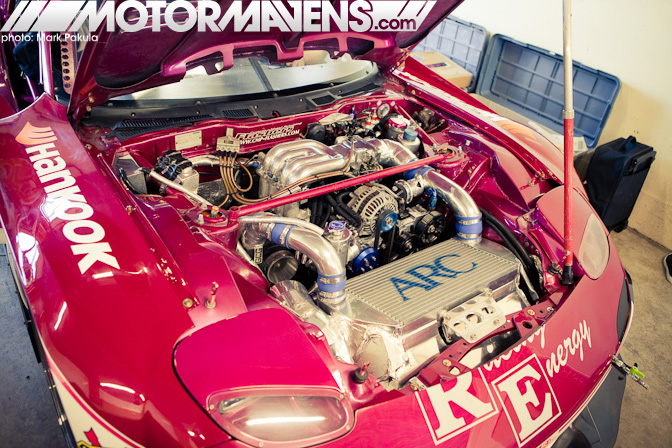 The R-Magic FD3S RX-7 has a show car quality to its engine bay. 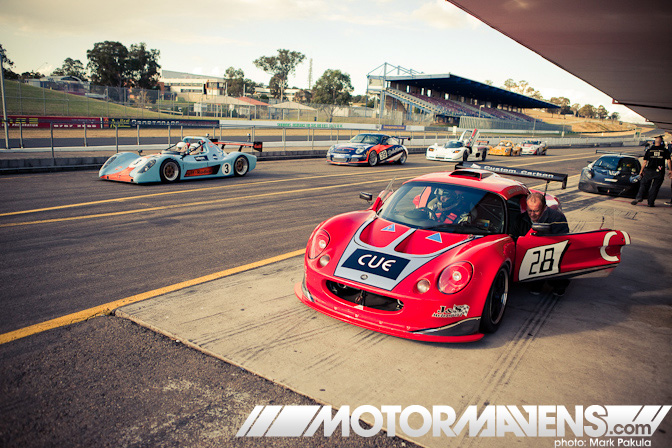 Open Practice at Eastern Creek brings a wide range of cars – Porsche GT3s, Radicals, and even a Mosler. 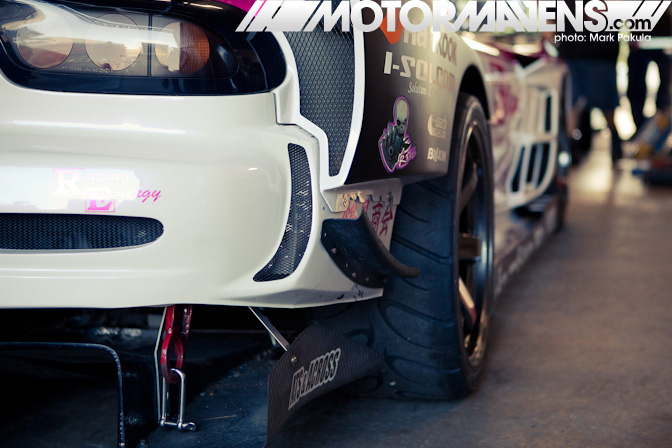 The aero technology on time attack cars is improving rapidly. Here, the R-Magic RX-7 shows its rear wings and diffusers. 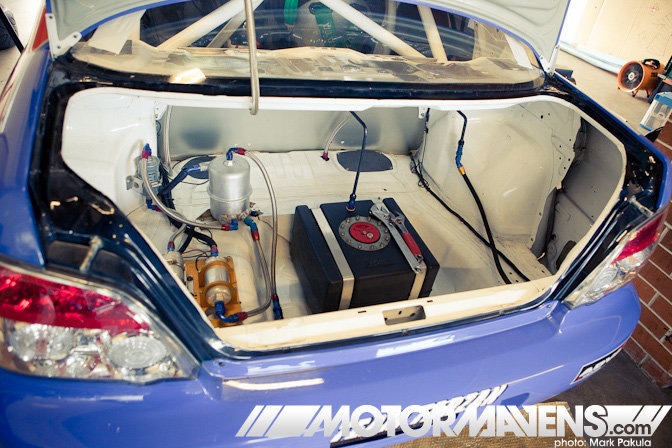 The fuel cells on T/A cars are usually quite small, with the Tomei Cusco WRX having the smallest we could find in the field. 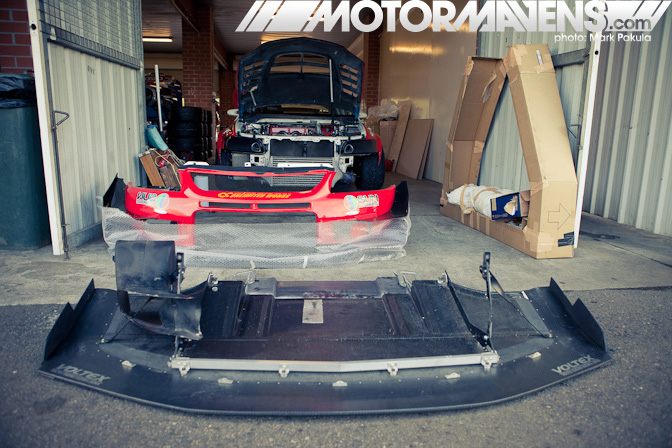 Here’s the two piece front end of the Cyber EVO. Voltex has brought along a few new additions for the Evo. 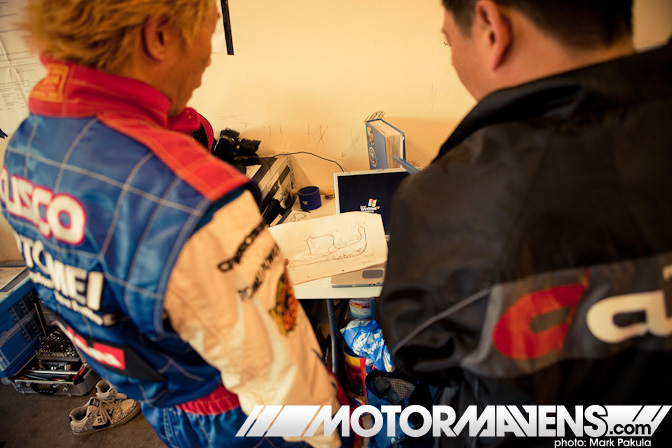 One of the fastest front wheel drive cars from Japan now calls Australia home, thanks to the 999 Automotive. The Top Fuel DC5 Integra features a turbocharged K20A engine, and has lapped Tsukuba in 1:01. 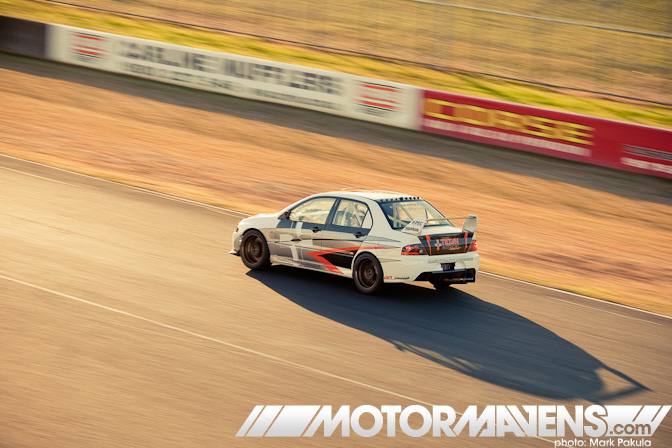 The Tilton Interiors Mitsubishi Lancer Evo is another local car, and having won the Superlap last year, has a good chance for this event.