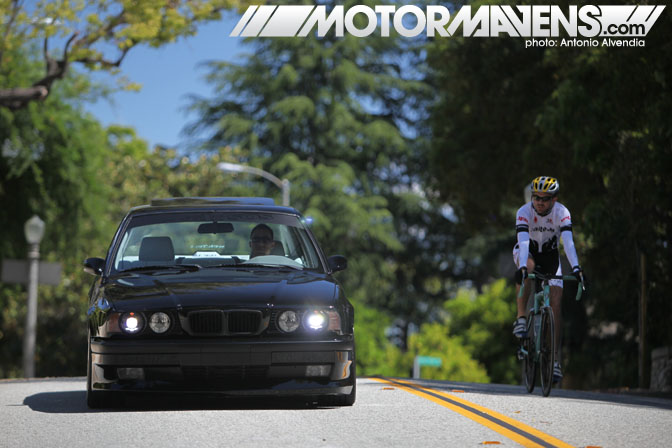 For some people, a car may be just a way to get from one place to the next. However, for guys like Adam Luong, it’s all about how you look on the way. If you were driving around town in this 1995 E34 5 Series, you can understand how a guy could feel that way.

It’s a rarity to see a 16 year old car in as pristine condition as this. Since my encounters with most 5 series bimmers leave much to be desired, it’s always a pleasure to discover one that has been built right – call it a pleasant surprise. This specimen is so clean that, to the untrained eye,  it appears almost to have just rolled off the Bavarian assembly line yesterday.

You may recall that, back in the 1990s, the BMW 5 Series was the top mid-sized sedan in its class – a class with very little competition. It was a must have for dads all across suburbia. Well, little has changed since then except that the 5 series has grown up to become a more elegant machine jam packed with enough gizmos and gadgetry to make a technologically inclined person go into mental overload. I could go on and 0n about my take on how the technological interface in modern BMWs dilutes the driving experience, that’s not what we’re here for. Today, it’s all about Adam Luong and his little piece of 5 Series heaven.

It was actually Antonio who first spotted this fine specimen at the Wek’fest in San Francisco. When he saw it again at the Bimmerfest in Pasadena, he told me about it and caught my full attention when he said that it was the cleanest E34 he’d ever seen. With a guy like Antonio saying that, I just had to see for myself. When I saw the car in person, I just had to agree. 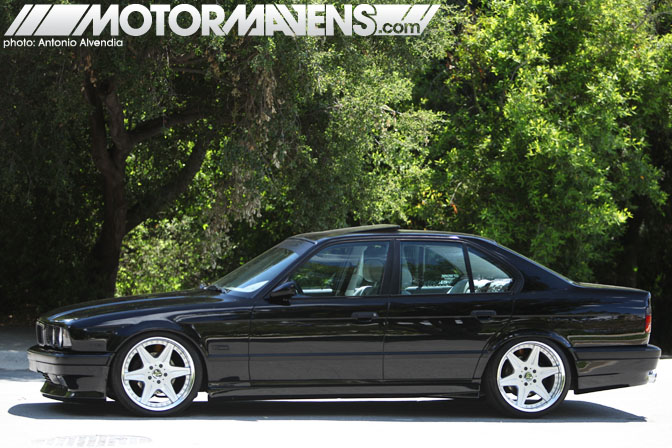 Adam’s story of his inspiration for the car and the manner in which the build evolved reads like the stories of so many auto enthusiasts, so I thought I’d briefly let him speak for us all. Maybe you’ll read your own story in his words. “The first time the E34 body caught my eye was when one of my best friends rolled up to San Jose State to pick me up for dim sum. He had a 1995 black 525i similar to my currently owned E34, which he soon started to fix up. His clean yet classy style had a real influence on me as it was very rare for me to see anybody rolling around in a 1995 e34 all fixed up – especially clean styled ones. The inspiration for my build came from him. His name is Robert Kane and I give thanks to his style and his old E34 for making me jump into my current BMW 525i. I bought this car all stock, and the paint and body weren’t good at all. At first I just wanted to make it a clean car – lower it with a nice front lip and some wheels and call it a day.”

Sound familiar? For Adam, and many other enthusiasts, what starts as “a simple lowered daily” usually doesn’t end this way. Time and time again, I’ve heard stories of guys who start off with this mind-set only to scrap it and push the boundaries a little further – bit by bit. As you can see in the pictures, this car deviated from the original plan by a long shot.  In addition to a simple lowering there’s been a fresh re-spray, a full body kit and a complete pushing of the limits with his choice of wheels. The end result – a super clean daily… but not so “simple.”

As you may already be aware, when you push the boundaries you’re sure to pick up skeptics. It just comes with the territory. In Adam’s case, the E34 community wasn’t rocking 19″ wheels because some found it difficult to tuck such a large rim. With Adam’s positive attitude and balls to the wall mind set, he set forth on a journey to go where no man had been before – call it a wheel trek. 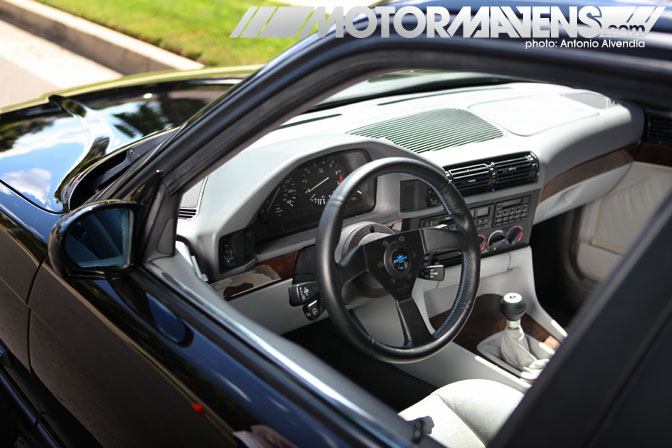 Over time, small bits and pieces found their way onto the car – the Personal steering wheel, the Momo shift knob (pictured above), the mint black hood. As the story goes, car guys will never really feel content once that tuning bug hits and, in Adam’s case that bug eventually led to a full blown case of tuner-itis causing the purchase of a full AC Schnitzer aero kit. The beauty of tuner-itis (when combined with a good sense of style) is that it leads to beautiful things. To be honest, the AC Schnitzer kit really adds to the character of the car. It’s subtle, yet not too flashy – clean and streamlined. Well done. 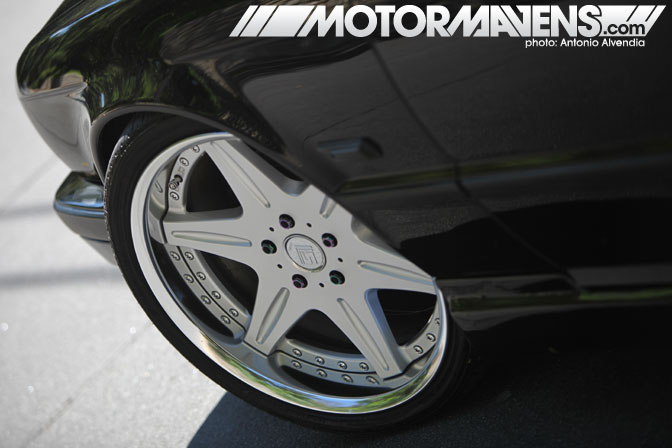 Now, back to the wheels! According to Adam, nobody in the E34 community really wanted to rock 19 inch rims since they were so big. However, Adam threw caution to the winds for the sake of proper stance – his words. He felt the wheels would tuck and look proper so he preceded to engage in many trials and test fittings eventually culminating with the introduction of a Japanese wheel brand to a German car. For some Bavarian purists, that might be considered shameful but, in this case, I think it suits the car rather well. Adam’s choice of wheel is the Work Super Wheels LS 406 (19×8.5 F- 19×10 R) and, as with all things that don’t fit neatly into the categories that tradition assigns, it caused the haters (posing as bloggers and forum bashers) to… well… hate. However, Adam’s response is as graceful as it is true, “I’m building this thing for myself and for no one else.” Isn’t that what it’s all really about in the end? 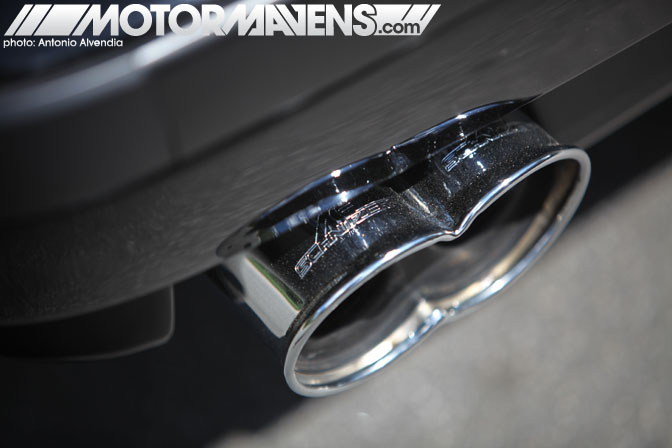 Keeping to the theme of creeping tuner-itis, Adam couldn’t be content with the stock exhaust tips and was able to source AC Schnitzer exhaust tips for the car. This cleaned up the look of the rear while adding that signature 2.5L inline-six throaty sound that most Bimmer owners crave. Nice touch Adam. 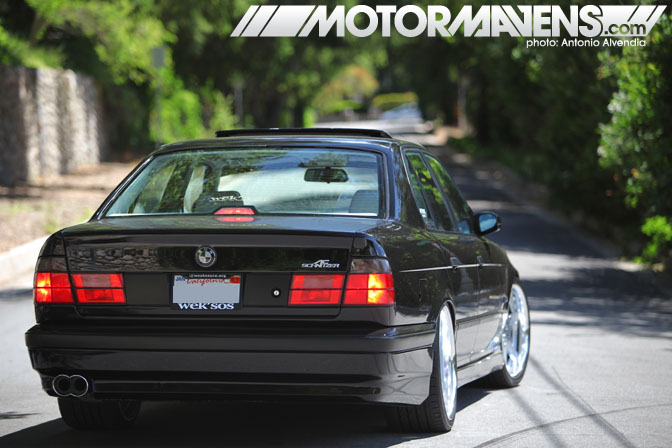 Adam wants to give special thanks to Robert “Shragon” Kane and his 525 for giving him the inspiration to build his own unique BMW 5 Series. And, for all of you current/future 5 Series owners, here’s a spec sheet of all the parts on Adam’s ride. Check it out and maybe you’ll be inspired to take that next step as well.

Finally, some words of advice to all project car builders: keep striving. At times it can be hard and a bit frustrating to deal with the everyday problems we face with our cars: whether sourcing those hard to find parts, dealing with the headaches of mechanics and body shops, or just plain old money issues. I’ll leave you with the words of one of the great hip hop poets, Tupac Shakur… Keep your head up!