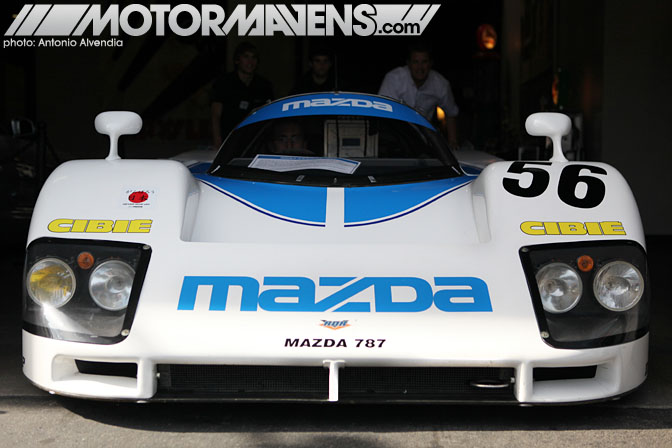 The past few days have been incredibly hectic for the MotorMavens Crew! Those who have been following our adventures live via the @MOTORMAVENS Instagram and Twitter will already know that we were in San Francisco for the past few days, but returned to sunny Southern California yesterday morning, just in time to meet a particular Mazda 787 Le Mans car at the annual Mazdaspeed Motorsports luncheon.

This year’s luncheon was held at a venue that we would be visiting for the very first time – the Crevier Classic Cars Collection in Orange County. While there were a ton of rare and expensive cars already on display at the Crevier Museum, Mazda brought some very interesting vehicles out from their own collection of historic cars… a vintage Mazda Cosmo, the Car&Driver Mazda RX2, and the belle of the ball – one of the three Mazda 787 race cars that competed in the 1991 Le Mans 24H, where Mazda became the first (and only) Japanese car company to win 1st Place at the world’s most famous endurance race. 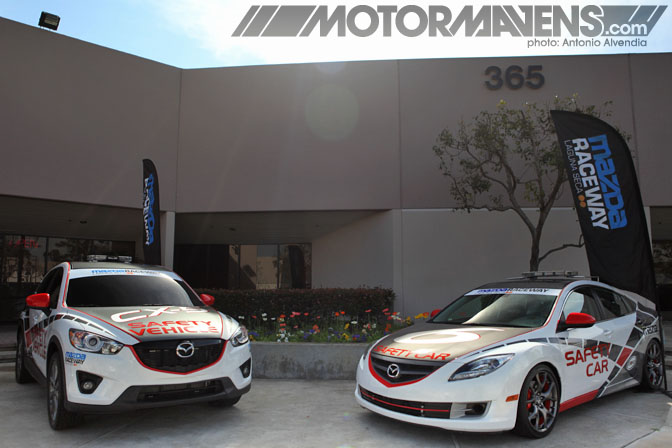 When we arrived at the Crevier building, we were greeted by these two safety cars, all decked out in race day graphics from Mazda Raceway at Laguna Seca. Why a Mazda 6 and a CX-5? Because Pace Car. (Corny joke, I know. I’m sorry.) 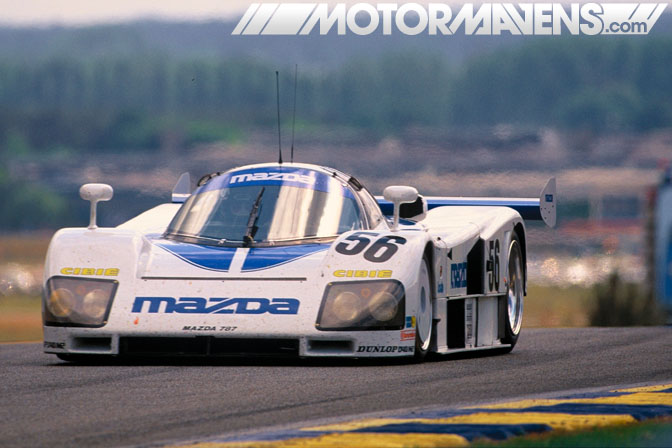 Here’s a photo from the Mazdaspeed archives of the #56 Mazda 787 in action at Le Mans! See the distinct difference between the front wheels with the aerodynamic disc and the super fat lipped rear wheels. Thanks to Dean Case from Mazdaspeed for the image! 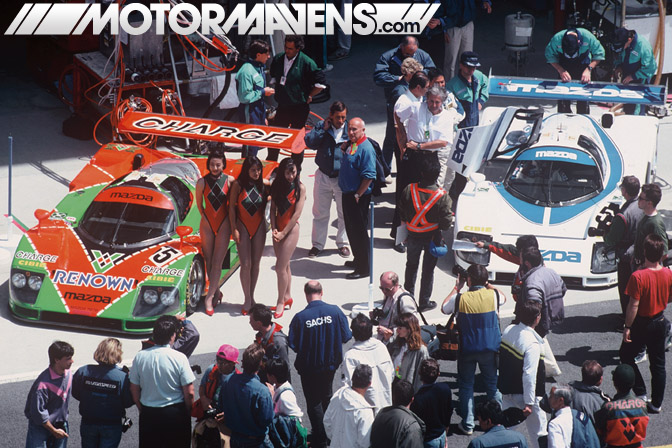 Here’s the Mazda 787 #56 car in the pit area at Le Mans in 1991, sitting right next to the race-winning Renown 787B that won First Place that year, cementing a place in the history books for Mazda and everyone else involved. I’m not sure about the full story here, but it looks a little bit like the #56 was a bit of a red-headed stepchild, since the Renown orange-and-green colors looked more prominent, and the car generally just stood out more. Look – the 787B even has its own matching race queens imported straight from Japan. The #56 787 doesn’t have any umbrella girls standing around it; just a bunch of technicians making adjustments to the rear wing! 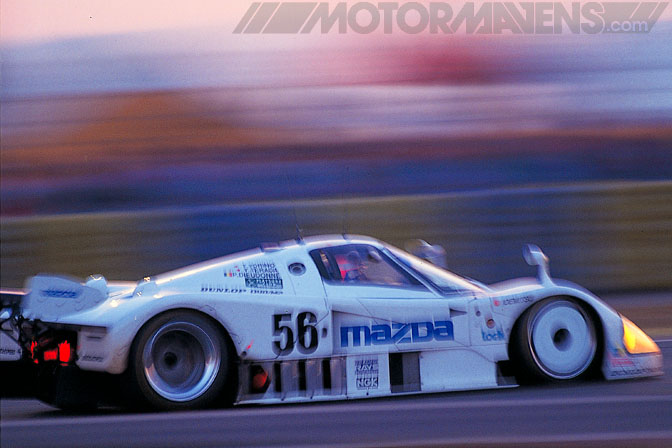 Here’s another vintage Le Mans photo of the 787 at speed. Remember that this panned photo was taken with a manual film camera! At the time this photo was taken, the photographers on the trackside weren’t able to use modern photographic conveniences like LCD screens on the rear of the camera to check for focus and exposure. Photography was more of a mix of luck and experience back in those days!

I love how the car looks with the headlight pods illuminated. So awesome! 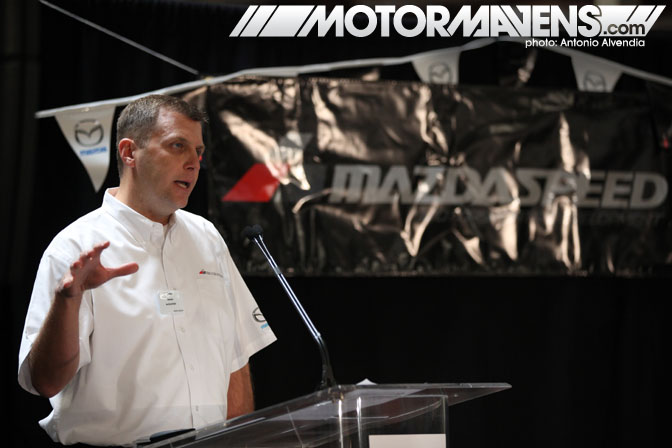 Inside the Crevier museum, the Director of Motorsports at Mazda, John Doonan, educated members of the media about all the racing activities that Mazda is involved in this year, from Star Mazda to B-spec; from Grand Am GT to the Playboy Mazda MX-5 Cup.

The Playboy Mazda MX-5 series sounds pretty interesting, but to be honest, I was pretty disappointed that there weren’t any Playboy playmates at the event to take photos and answer questions about… racing. 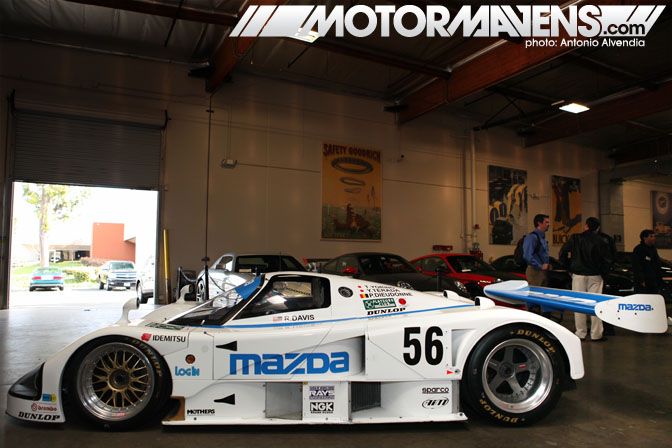 After the speeches and lunch, I spotted the 787 being pushed out towards the transporter, so I grabbed my camera to take some snapshots! All throughout the entire lunch, the car was surrounded by journalists, so it was almost impossible to get clean shots with a real camera. I did manage to post up some cool Instagram photos from my iPhone, however. Follow @MOTORMAVENS on Instagram to see them! 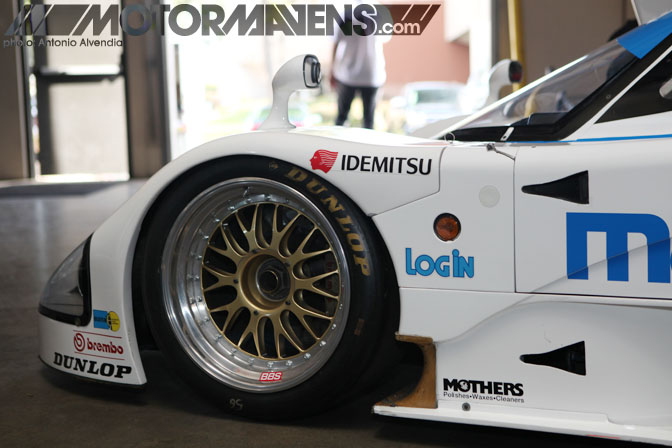 Oooh! Check out the single-lugnut 3piece BBS racing wheel up front, wrapped in Dunlop rubber. No wonder BBS is a favorite wheel of racers all over the world – the racing wheels look simply amazing. 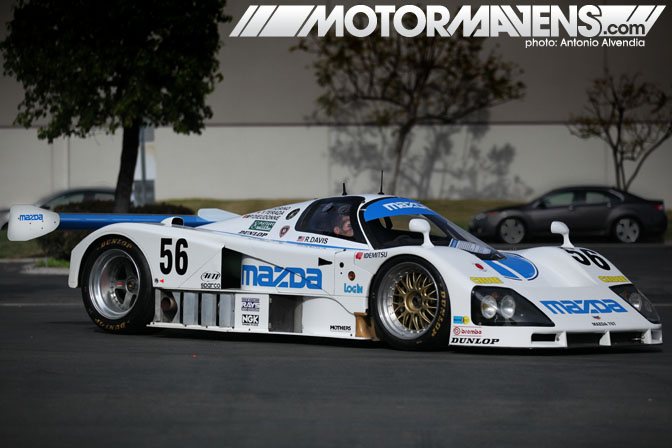 Once the 787 was outside, I persuaded the guys pushing to step away from the 787 quickly enough for me to grab a photo. I was pretty annoyed by the cars in the background ruining the shot, but I only had a few seconds to grab the shot before the car was loaded up and carted back to the Mazda race car dungeon that sits underneath their R&D center in Irvine CA. 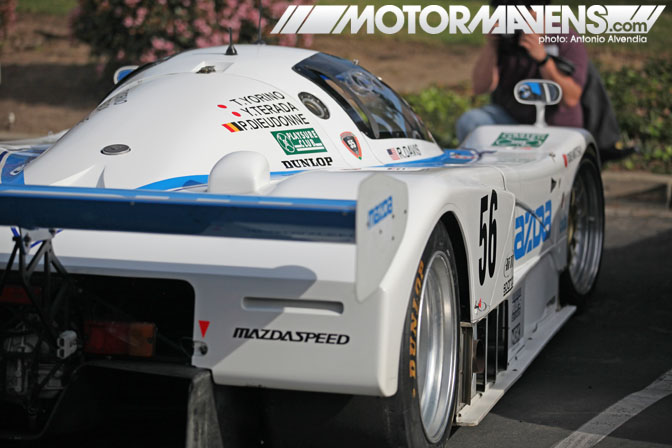 I could just stand around this car and stare at it for hours. It is just so interesting to look at, because there are so many cool details on a race car like this! The dry carbon rear splitter was massive, but its thunder was definitely stolen by the 787’s gigantic rear wing. Check out the air ducts right in front of the rear wheel; if you look closely enough, you’ll also see the side exit exhaust pipe. 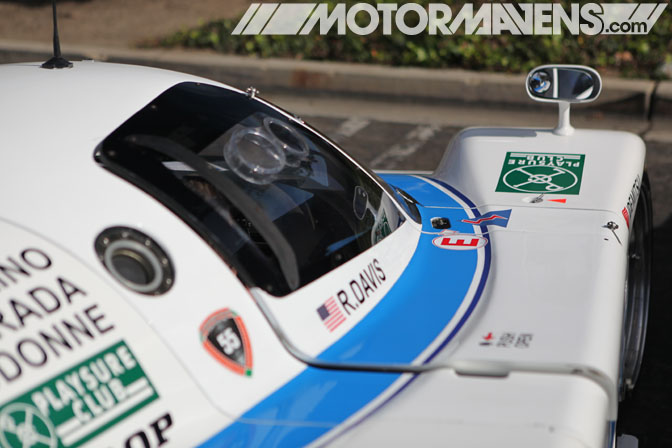 Fender mirrors may be the rage for Japanese nostalgic cars, but they’re also very functional on full race cars like this one. The fenders are mounted forward on the fender to allow the driver a full field of vision without having to turn his head to one side. 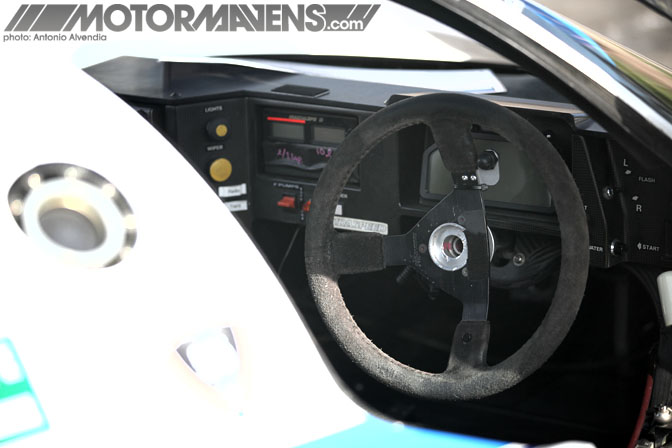 The cockpit of the 787 revealed a ton of dry carbon fiber, and this interesting Mazdaspeed suede steering wheel with only three bolt holes! I know quite a few Miata guys and RX7 guys that would kill for one of these! This is exactly the type of stuff Mazdaspeed should sell. It’s much, muchhhhhhhhhhh cooler than the products you normally find in their lineup. 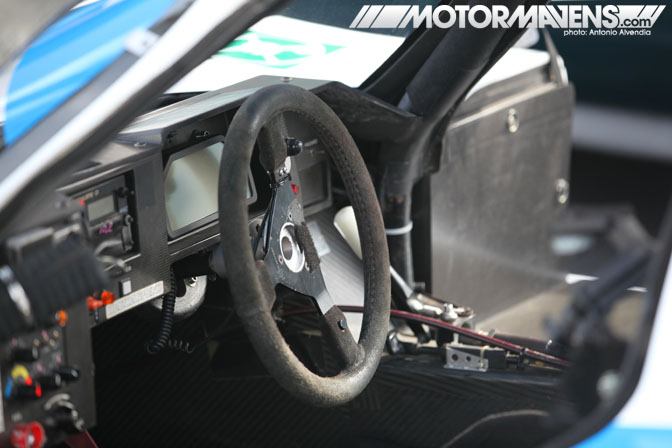 Here’s a view of the cockpit from the other side. Check out that carbon fiber tunnel… and remember, this is 1991 race car technology! Awesome. 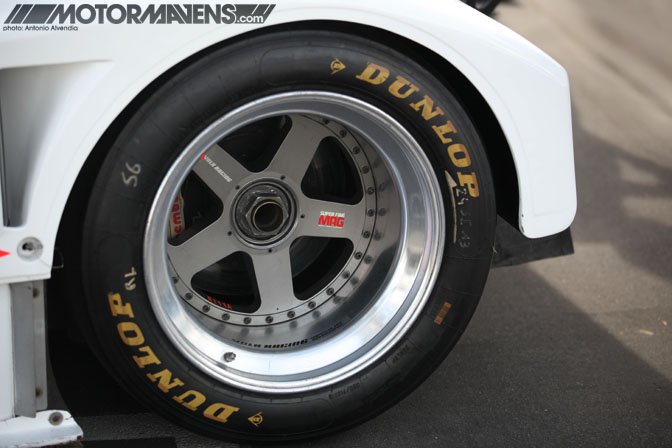 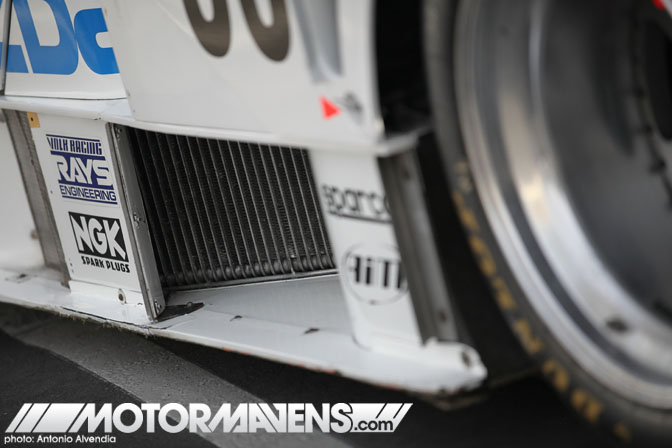 Just in front of the wheels are air ducts. On the left side, it looks like an oil cooler with cooling vents? 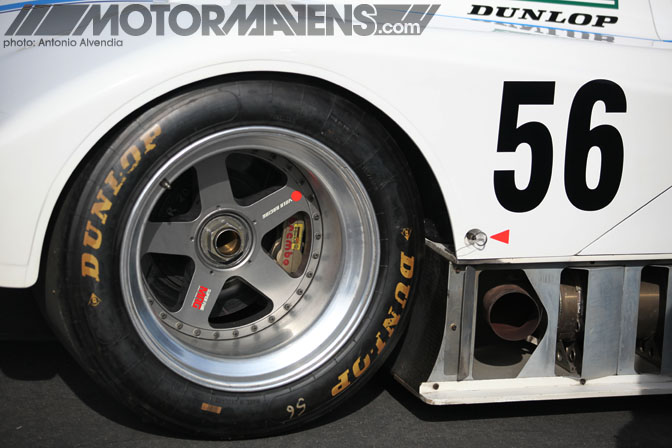 On the right side, we have a huge side exit exhaust pipe, with aluminum heat shields with vents to release the hot air. Also check out the Brembo racing brakes, with slotted rotors and brake temp gauges on the calipers! 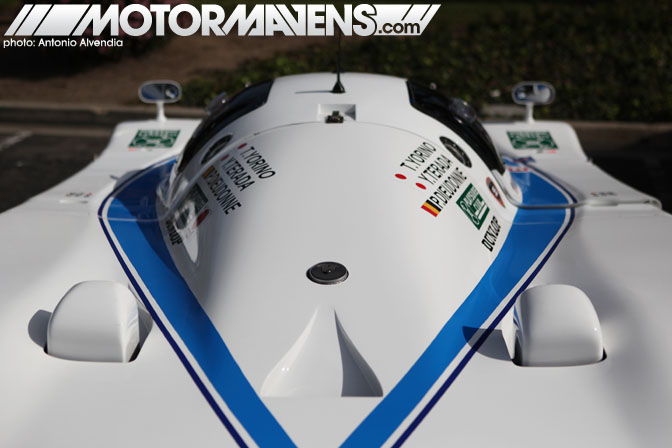 The roofline of the 787 is streamlined and aerodynamic. It reminds me of some toy robots I had when I was a kid! 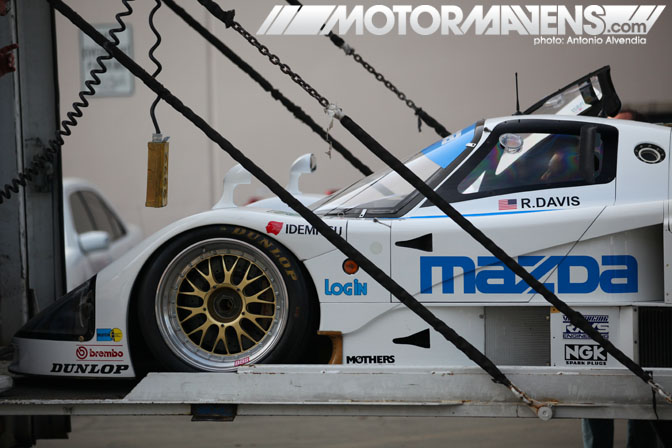 As I watched the 787 getting loaded onto the transporter, I admired its low stance, wide, plus sized lightweight racing wheels, lack of fender gap, and aggressive front chin spoiler. These are some of the most popular styling trends for modified street cars today; some people that criticize modern modified street cars seem to forget that many of these popular styling cues were born on the race track. 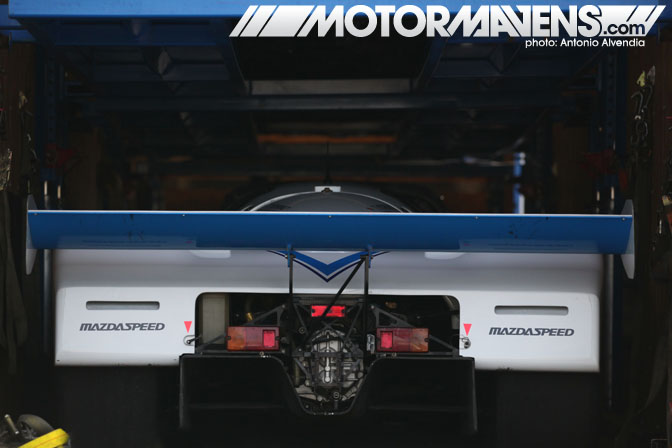 What a nice behind. Thanks for the lunch, Mazdaspeed… and thanks for being such a great lunch date, Mazda 787. Until we meet again…